A new music platform, Uppbeat, aims to make it easier for YouTubers and other content creators to find quality free music to use in their videos. The system, which is designed to navigate the complexities of copyright claims while also fairly compensating artists, offers an alternative to existing free music platforms, including YouTube’s own Audio Library and Creative Commons’ legal music for videos, for example.

The idea for the startup comes from Lewis Foster and Matt Russell, the U.K.-based co-founders of another music-licensing company, Music Vine, which has been operating for about six years.

Last year, the co-founders realized there was a growing opportunity to address the creator space with a slightly different product.

“We were realizing, more and more, was that the creator space — YouTubers, streamers, podcasters — has become enormous, but there wasn’t a music platform that was doing a nice job for those type of users,” explains Foster. “So we sat down and thought about what the perfect music resource would look like for creators. That led to deciding to build Uppbeat,” he says.

They began developing the Uppbeat website in September 2020 and launched it to the public on Monday.

On the creators’ side, Uppbeat’s key focus is on eliminating headaches over copyright claims, particularly on YouTube.

Currently, if a YouTuber gets a copyright claim over music in their video, it can cause them to lose income. Though YouTube has worked to address this problem over the years with new features and changes to its Content ID match system, it’s still an issue.

“If a YouTuber gets a copyright claim, [YouTube] can de-monetize their video. And if they go through YouTube’s dispute system, it can take as long as 30 days for it to get resolved. It’s a pretty big frustration for YouTubers,” Foster says.

Uppbeat’s music will instead almost instantly clear the claims. 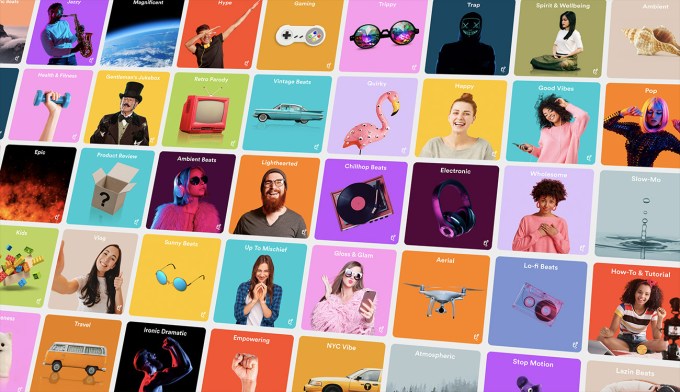 Free users simply add a credit to their YouTube video description to clear copyright claims, while paid users are added to an approved list, eliminating this extra step.

Because the tracks have to be fingerprinted to fight off unlicensed usage, a copyright claim will still occur. But instead of taking days or weeks to resolve, it will be cleared within about five minutes, the company says. The Uppbeat system clears the claim by checking the video description for the necessary credit and by checking the claim against its list of paid users. This is all automated, too, which helps to speed things up. 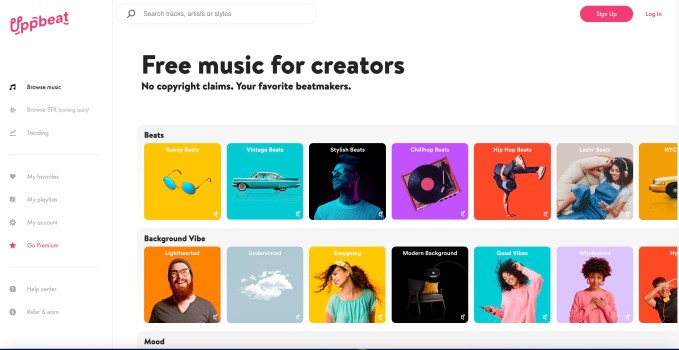 Meanwhile, on the artists’ side, Uppbeat pays as their music is used — even by the free users.

The revenue from the premium subscriptions, and soon, advertising, is divided between the artists on a monthly basis, in proportion to the number of downloads the artist receives.

“What that means from the artists’ perspective is, on average, they’re going to make the same amount from tracks on the premium side as they do on the free side,” says Lewis. “It means, even for free usage, they will get paid,” he adds.

The site will also monetize through audio ads that play as you browse the tracks and listen to the music. (However, these are just promoting the paid plan for the time being.)

Browsing Uppbeat’s catalog is easy, too. The music is organized by genre, theme and style in colorful rows that aim to introduce all the different types of music and beats a YouTuber may need. For example, there’s music customized for use  in the background and other tracks that cater to different moods like inspiring, calm, happy, dramatic and more. A catalog of SFX (sound effects) is expected to be added in a few months, too.

Uppbeat believes its existing music industry connections with producers, composers and songwriters via Music Vine will help them to source higher-quality tracks than other free music services.

At present, the startup is self-funded through revenues from Music Vine, but Foster says they’ve had some VC interest. For now, though, the founders are looking to keep the ownership in-house, for the most part.

However, Uppbeat is experimenting with both a referral program and a profit-sharing scheme. The latter will allow YouTubers who bring Uppbeat new customers, then take the full revenue from those customers for two years’ time.

“We’re taking a massive sacrifice,” Foster admits. “But from from our perspective, the faster we can get Uppbeat out there and well-known in the YouTuber space, then we’re happy to share that [revenue]. We think it’s a cool idea to share that within the YouTuber community, rather than [take] a big private investment,” he notes.

The startup is also considering making shares in the company available to some larger YouTubers, Foster adds.

Today, Uppbeat is a team of eight employees and 12 freelancers, based in Leeds, U.K.