Netflix is always in search of a better way to instantly connect users to something to watch, instead of having them waste time unsuccessfully scrolling through all the available programming options. Now, the company says a recent test focused on solving this problem, Shuffle Play, has proven popular enough to roll out to all users worldwide.

In the streamer’s Q4 2020 earnings, announced today, Netflix noted the product development only briefly. It referred broadly to a test of a new feature that “gives members the ability to choose to instantly watch a title chosen just for them versus browse.” It also noted the feature would reach all users worldwide sometime in the first half of 2021.

Netflix confirmed to TechCrunch the test in question is Shuffle Play, which we first covered back in August 2020. However, the company tells us the actual name of the feature is something that’s still being tested.

Shuffle Play puts a big button right on the Netflix home screen, beneath your profile icon. When clicked, Netflix randomly plays content its personalization algorithms think you’ll like. This could include a movie you’re currently watching, something you’ve saved to your watch list or a title that’s similar to something you’ve already watched, for example.

A variation has also been spotted in the TV app’s sidebar navigation. More recently, we’ve found this sidebar option relabeled as “Shuffle Play,” instead of “Play Something” as before.

In addition, as you start scrolling down through the Netflix home screen on the TV, you’ll eventually come across a screen that explains what the option is for and points to the new button with a red arrow.

“Not sure what to watch?” this page asks, before explaining how Shuffle Play works. 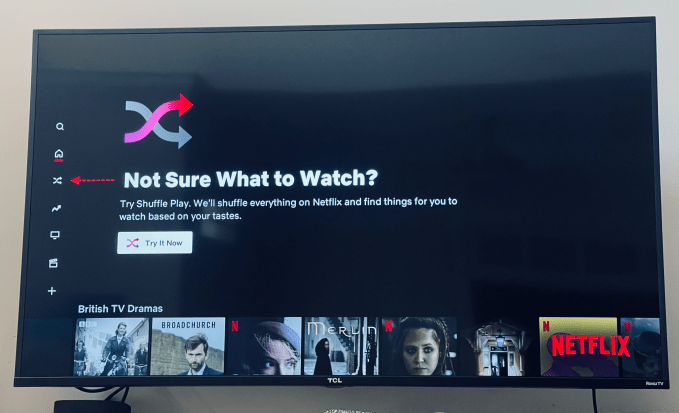 The button has already appeared on some users’ Netflix app for TV devices, due to the ongoing tests.

In its letter to shareholders, Netflix said the user response to Shuffle Play has been positive — which is funny because the original responses to the feature on social media were decidedly mixed. However, the company doesn’t make its decisions based on what a handful of tweets once said, but rather in how Netflix members actually used the product, of course.

Netflix also tells us the feature is still being tested only on TV devices, not other platforms like web or mobile. It declined to say how many users or what percentage had been opted into the test to date.

Shuffle Play is the latest in a long series of tests where Netflix has tried to make it easier to find something to watch right away.

In 2019, for example, Netflix tried out a shuffle mode that let you click on a popular show to start playing a random episode. This may have worked well when users wanted to play a random episode of their default pick, like the “The Office” or “Friends,” but Netflix has lost both.

It has also promoted its shows on the login screen and as screensavers, and notoriously autoplayed previews until last year, when it finally caved in to user demand for a way to turn this off.

Netflix’s horrible autoplay previews can be turned off

Overall, the goal is to make the Netflix experience closer to that of traditional TV, where you could switch the set on and content just started playing.

Netflix says Shuffle Play will roll out globally in the first half of 2021, but didn’t share more specifics.