As the U.S. heads into one of the most perilous phases of American democracy since the Civil War, social media companies are scrambling to shore up their patchwork defenses for a moment they appear to have believed would never come.

Most major platforms pulled the emergency brake last week, deplatforming the president of the United States and enforcing suddenly robust rules against conspiracies, violent threats and undercurrents of armed insurrection, all of which proliferated on those services for years. But within a week’s time, Amazon, Facebook, Twitter, Apple and Google had all made historic decisions in the name of national stability — and appearances. Snapchat, TikTok, Reddit and even Pinterest took their own actions to prevent a terror plot from being hatched on their platforms.

Now, we’re in the waiting phase. More than a week after a deadly pro-Trump riot invaded the iconic seat of the U.S. legislature, the internet still feels like it’s holding its breath, a now heavily fortified inauguration ceremony looming ahead. 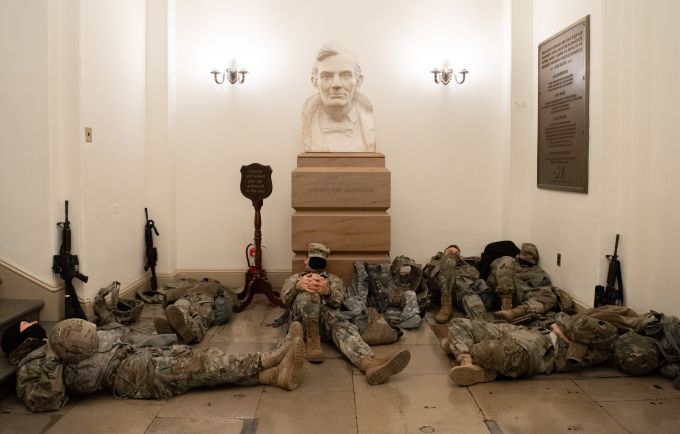 What’s still out there

On the largest social network of all, images hyping follow-up events continued to circulate midweek. One digital Facebook flyer promoted an “armed march on Capitol Hill and all state Capitols,” pushing the dangerous and false conspiracy that the 2020 presidential election was stolen.

Facebook says that it’s working to identify flyers calling for “Stop the Steal” adjacent events using digital fingerprinting, the same process it uses to remove terrorist content from ISIS and al-Qaida. The company noted that it has seen flyers calling for events on January 17 across the country, January 18 in Virginia and Inauguration Day in D.C.

At least some of Facebook’s new efforts are working: One popular flyer TechCrunch observed on the platform was removed from some users’ feeds this week. A number of “Stop the Steal” groups we’d observed over the last month also unceremoniously blinked offline early this week following more forceful action from the company. Still, given the writing on the wall, many groups had plenty of time to tweak their names by a few words or point followers elsewhere to organize.

With only days until the presidential transition, acronym-heavy screeds promoting QAnon, an increasingly mainstream collection of outrageous pro-Trump government conspiracy theories, also remain easy to find. On one page with 2,500 followers, a QAnon believer pushed the debunked claim that anti-fascists executed the attack on the Capitol, claiming “January 6 was a trap.” 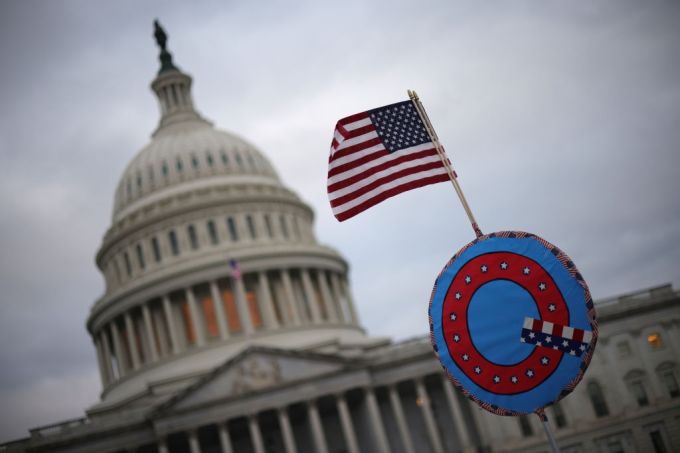 On a different QAnon group, an ominous post from an admin issued Congress a warning: “We have found a way to end this travesty! YOUR DAYS ARE NUMBERED!” The elaborate conspiracy’s followers were well represented at the deadly riot at the Capitol, as the many giant “Q” signs and esoteric T-shirt slogans made clear.

In a statement to TechCrunch about the state of extremism on the platform, Facebook says it is coordinating with terrorism experts as well as law enforcement “to prevent direct threats to public safety.” The company also noted that it works with partners to stay aware of violent content taking root on other platforms.

Facebook’s efforts are late and uneven, but they’re also more than the company has done to date. Measures from big social networks coupled with the absence of far-right social networks like Parler and Gab have left Trump’s most ardent supporters once again swearing off Silicon Valley and fanning out for an alternative.

Private messaging apps Telegram and Signal are both seeing an influx of users this week, but they offer something quite different from a Facebook or Twitter-like experience. Some expert social network observers see the recent migration as seasonal rather than permanent.

“The spike in usage of messaging platforms like Telegram and Signal will be temporary,” Yonder CEO Jonathon Morgan told TechCrunch. “Most users will either settle on platforms with a social experience, like Gab, MeWe or Parler, if it returns, or will migrate back to Twitter and Facebook.”

That company uses AI to track how social groups connect online and what they talk about — violent conspiracies included. Morgan believes that propaganda-spreading “performative internet warriors” make a lot of noise online, but a performance doesn’t work without an audience. Others may quietly pose a more serious threat.

“The different types of engagement we saw during the assault on the Capitol mirror how these groups have fragmented online,” Morgan said. “We saw a large mob who was there to cheer on the extremists but didn’t enter the Capitol, performative internet warriors taking selfies, and paramilitaries carrying flex cuffs (mislabeled as ‘zip ties’ in a lot of social conversation), presumably ready to take hostages.

“Most users (the mob) will be back on Parler if it returns, and in the meantime, they are moving to other apps that mimic the social experience of Twitter and Facebook, like MeWe.”

Still, Morgan says that research shows “deplatforming” extremists and conspiracy-spreaders is an effective strategy and efforts by “tech companies from Airbnb to AWS” will reduce the chances of violence in the coming days.

Cleaning up platforms can help turn the masses away from dangerous views, he explained, but the same efforts might further galvanize people with an existing intense commitment to those beliefs. With the winds shifting, already heterogeneous groups will be scattered too, making their efforts desperate and less predictable.

Jonathan Greenblatt, CEO of the Anti-Defamation League, told TechCrunch that social media companies still need to do much more to prepare for inauguration week. “We saw platforms fall short in their response to the Capitol insurrection,” Greenblatt said.

He cautioned that while many changes are necessary, we should be ready for online extremism to evolve into a more fractured ecosystem. Echo chambers may become smaller and louder, even as the threat of “large scale” coordinated action diminishes.

“The fracturing has also likely pushed people to start communicating with each other via encrypted apps and other private means, strengthening the connections between those in the chat and providing a space where people feel safe openly expressing violent thoughts, organizing future events and potentially plotting future violence,” Greenblatt said.

By their own standards, social media companies have taken extraordinary measures in the U.S. in the last two weeks. But social networks have a long history of facilitating violence abroad, even as attention turns to political violence in America.

Greenblatt’s repeated calls for companies to hire more human moderators, a suggestion often made by experts focused on extremism. He believes social media could still take other precautions for inauguration week, like introducing a delay into livestreams or disabling them altogether, bolstering rapid response teams and suspending more accounts temporarily rather than focusing on content takedowns and handing out “strikes.”

“Platforms have provided little to nothing in the way of transparency about learnings from last week’s violent attack in the Capitol,” Greenblatt said.

“We know the bare minimum of what they ought to be doing and what they are capable of doing. If these platforms actually provided transparency and insights, we could offer additional — and potentially significantly stronger — suggestions.”