Capsule, a video Q&A platform aimed at brands, emerged last year in direct response to the challenges companies were facing in terms of reaching consumers during the pandemic. Now, the business has closed on $2 million in pre-seed funding. The round was led by Array Ventures and included participation from Bloomberg Beta and other angels.

The startup was founded by the same team that originally created the animated GIF capture tool and social network Phhhoto, which eventually lost out to Instagram’s clone, Boomerang. Phhhoto shut down in 2017 and the team pivoted to work on an experiential marketing business, Hypno. The new company had been working with brands that hosted live events and experiences as a way to connect with customers. Hypno would offer them things like photo booths and other camera platforms that allowed for interactivity.

The COVID-19 pandemic essentially killed Hypno’s business as live events dried up. However, the brands Hypno had worked with still had the same needs — they just had to go about reaching their customers in a different way. 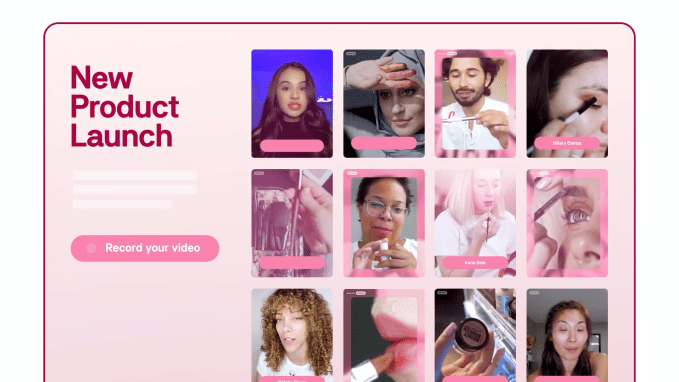 That’s how Capsule came to exist. Launched last year, the startup offers a full platform for hosting Q&A sessions, where the brand starts with a template that they then customize to match their campaign by changing the logo, colors, buttons, background and URLs — sort of a like a Squarespace for the video Q&A format.

The brand will then write their questions and prompts for consumers to answer, in the form of short video responses. This Q&A URL is distributed however the company chooses — like on social media, for example. A new feature also allows a “capsule” to be embedded on the website.

The consumers’ responses to the Q&A are curated for the final video product. What makes the technology even more interesting is how Capsule assembles this footage.

Capsule instantly and automatically processes the video, adding elements like music and graphics, pre-roll or post-roll, which makes the resulting video appear professionally edited. The startup does this by using its own JavaScript-based programming language that automates mixing of things like color, audio, graphics and dynamic type. All the customer has to do is select the kind of video they want — like one with an energetic feel or a more somber one, for instance.

Today, Capsule has grown its library to about 20 base templates. But each of these can be edited by changing colors, styles and even the music — including either from direct uploads or from thousands of royalty-free tracks Capsule provides.

According to Capsule co-founder Champ Bennett, the platform’s flexibility has led to a wide range of use cases. Though the company’s first customers had come from the live events space that Hypno had catered to, new customers soon began to adopt the product.

“What we immediately started to hear from both our existing customers and then, suddenly, a bunch of new customers that were coming our way, is that the platform was useful in so many different contexts,” he explains. “For example, UGC [user-generated content] campaigns or generating social content to promote a business, or awareness, or product reviews and testimonials, or even creators who just wanted a faster way to make content that looked and felt a little bit more professional,” Bennett says.

At launch, Capsule was used by companies like Netflix and organizations like OkayAfrica. It’s since landed contracts with hundreds of customers, including teams inside larger organizations like Google, Samsung, Salesforce, Deloitte and The Wall Street Journal, along with other small-to-medium businesses, like Paloma Health. The USO has also used Capsule.

These brands and others are especially hungry for tools that help them create original, short-form video content, which is becoming a key way businesses are marketing their products and services. Capsule notes that studies have indicated video click-through rates are two-three times higher than static images and 95% of businesses are reporting an increase in their video spend year-over-year.

The pandemic had accelerated the existing demand for video content, but brands faced challenges in terms of video being difficult to scale.

“Increasingly, brands have started to kind of hack the way that they can create video,” says Bennett. “And one of the ways they’re doing that is by tapping into different creators within their organizations — whether it’s employees or founders or partners or influencers or fans of the brand or whatever it is — then activating them to create content on their behalf,” he continues. “We call this community-generated content, which is sort of like an iteration on user-generated content. It’s this idea that content can come from anywhere.”

Capsule says it wanted to work with Array Ventures GP Shruti Gandhi, who has an engineering background, because she very deeply understood the core technology. She introduced the team to Bloomberg Beta in New York, which also immediately understood what Capsule was building, Bennett says.

With the additional funds, Capsule will be hiring a product designer and will be developing new collaboration features, like the ability to upvote content.

Longer-term, the company believes its platform will enable more people to get involved with video creation.

“It turns out that there are so many different people within businesses who are capable of creating video content. They just don’t have the technical know-how to do it. They’re not video editors,” Bennett says. “So what we’re really doing is untapping this creative potential that exists inside of businesses everywhere, small and large.”