Researchers at Harvard’s Wyss Institute for Biologically Inspired Engineering have created a set of fish-shaped underwater robots that can autonomously navigate and find each other, cooperating to perform tasks or just placidly school together.

Just as aerial drones are proving themselves useful in industry after industry, underwater drones could revolutionize ecology, shipping and other areas where a persistent underwater presence is desirable but difficult.

The last few years have seen interesting new autonomous underwater vehicles, or AUVs, but the most common type is pretty much a torpedo — efficient for cruising open water, but not for working one’s way through the nooks and crannies of a coral reef or marina.

For that purpose, it seems practical to see what Nature herself has seen fit to create, and the Wyss Institute has made a specialty of doing so and creating robots and machinery in imitation of the natural world.

In this case, Florian Berlinger, Melvin Gauci and Radhika Nagpal, all co-authors on a new paper published in Science Robotics, decided to imitate not just the shape of a fish, but the way it interacts with its fellows as well.

Having been inspired by the sight of schooling fish during scuba diving, Nagpal has pursued the question: “How do we create artificial agents that can demonstrate this kind of collective coherence where a whole collective seems as if it’s a single agent?”

Their answer, Blueswarm, is a collection of small “Bluebots,” 3D-printed in the shape of fish, with fins instead of propellers and cameras for eyes. Although neither you nor I is likely to mistake these for actual fish, they’re far less scary of an object for a normal fish to see than a six-foot metal tube with a propeller spinning loudly in the back. The Bluebots also imitate nature’s innovation of bioluminescence, lighting up with LEDs the way some fish and insects do to signal others. The LED pulses change and adjust depending on each bot’s position and knowledge of its neighbors.

Using the simple senses of cameras and a photosensor at the very front, elementary swimming motions and the LEDs, Blueswarm automatically organizes itself into group swimming behaviors, establishing a simple “milling” pattern that accommodates new bots when they’re dropped in from any angle. 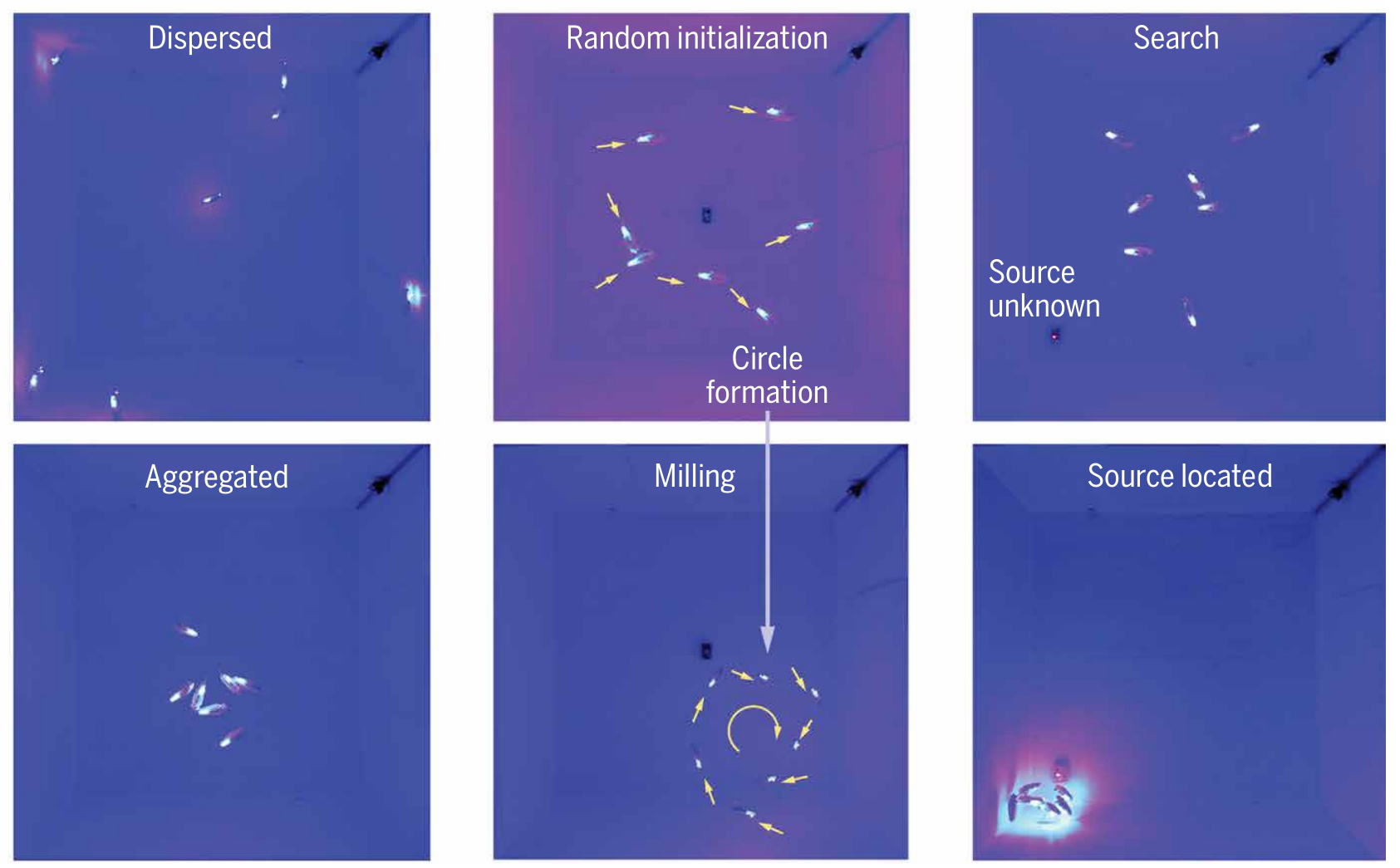 The robots can also work together on simple tasks, like searching for something. If the group is given the task of finding a red LED in the tank they’re in, they can each look independently, but when one of them finds it, it alters its own LED flashing to alert and summon the others.

It’s not hard to imagine uses for this tech. These robots could get closer to reefs and other natural features safely without alarming the sea life, monitoring their health or looking for specific objects their camera-eyes could detect. Or they could meander around underneath docks and ships inspecting hulls more efficiently than a single craft can. Perhaps they might even be useful in search and rescue.

Tiny water-based robot is powered by light and can walk, move cargo and even dance

The research also advances our understanding of how and why animals swarm together in the first place.

With this research, we cannot only build more advanced robot collectives, but also learn about collective intelligence in nature. Fish must follow even simpler behavior patterns when swimming in schools than our robots do. This simplicity is so beautiful yet hard to discover,” said Berlinger. “Other researchers have reached out to me already to use my Bluebots as fish surrogates for biological studies on fish swimming and schooling. The fact that they welcome Bluebot among their laboratory fish makes me very happy.”