Mobile adoption continued to grow in 2020, in part due to the market forces of the COVID-19 pandemic. According to App Annie’s annual “State of Mobile” industry report, mobile app downloads grew by 7% year-over-year to a record 218 billion in 2020. Meanwhile, consumer spending grew by 20% to also hit a new milestone of $143 billion, led by markets that included China, the United States, Japan, South Korea and the United Kingdom. 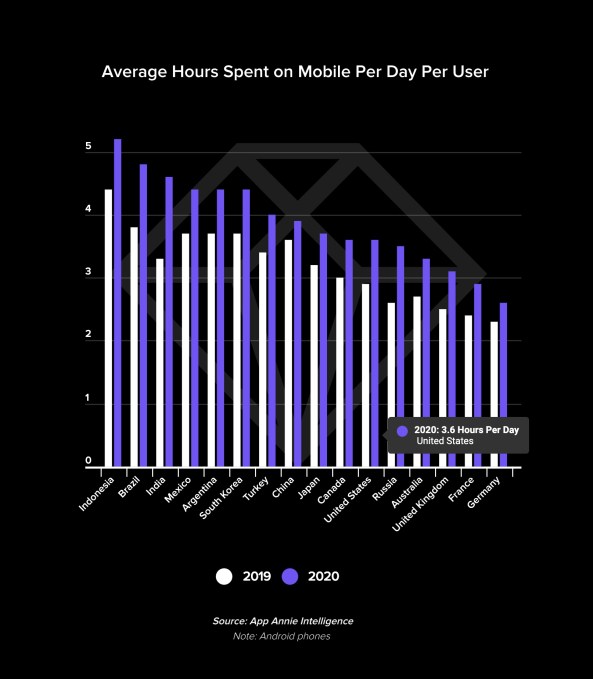 In another shift, app usage in the U.S. surged ahead of the time spent watching live TV. Currently, the average American watches 3.7 hours of live TV per day, but now spends four hours on their mobile device.

The increase in time spent is a trend that’s not unique to the U.S., but can be seen across several other countries, including both developing mobile markets like Indonesia, Brazil and India, as well as places like China, Japan, South Korea, the U.K., Germany, France and others.

The trend isn’t isolated to any one demographic, either, but is seen across age groups. In the U.S., for example, Gen Z, millennials and Gen X/Baby Boomers spent 16%, 18% and 30% more time in their most-used apps year-over-year, respectively. However, what those favorite apps looked like was very different. 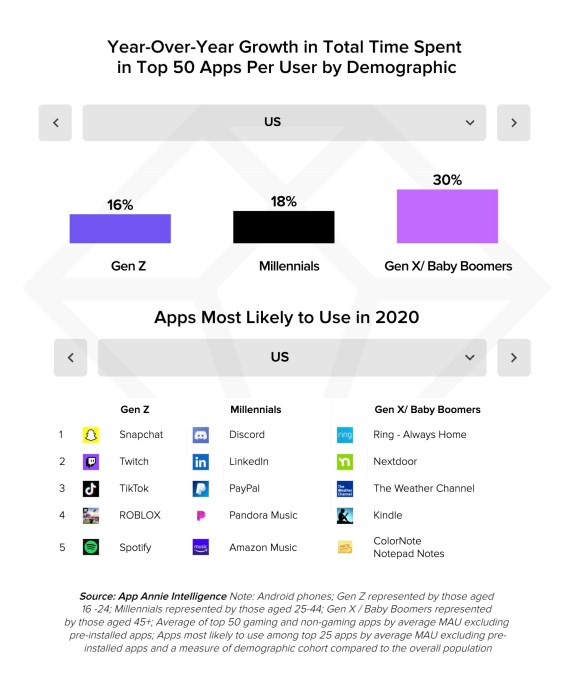 The pandemic didn’t necessarily change how consumers were using apps in 2020, but rather accelerated mobile adoption by two to three years’ time, the report found.

Investors were also eager to fuel mobile businesses as a result, pouring $73 billion in capital into mobile companies — a figure that’s up 27% year-over-year. According to Crunchbase data, 26% of total global funding dollars in 2020 went to businesses that included a mobile solution. 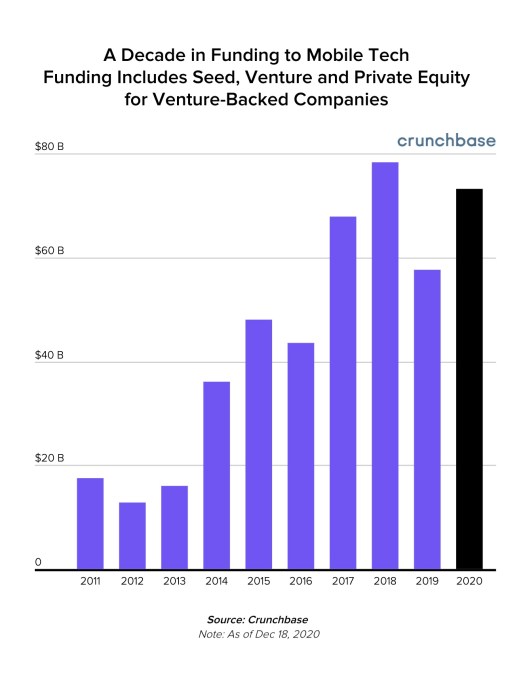 From 2016 to 2020, global funding to mobile technology companies more than doubled compared with the previous five years, and was led by financial services, transportation, commerce and shopping.

Mobile gaming adoption also continued to grow in 2020. Casual games dominated the market in terms of downloads (78%), but Core games accounted for 66% of games’ consumer spend and 55% of the time spent.

With many stuck inside due to COVID-19 lockdowns and quarantines, mobile games that offered social interaction boomed. Among Us, for example, became a breakout game in several markets in 2020, including the U.S. 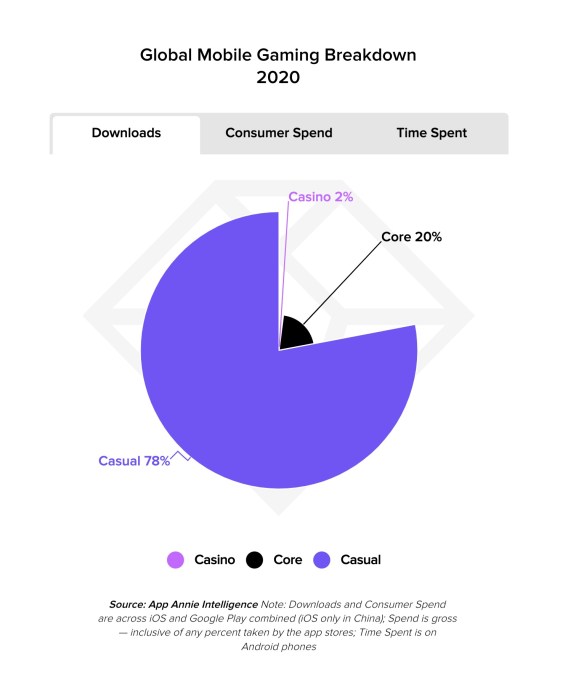 Other app categories saw sizable increases over the past year, as well.

Time spent in Finance apps in 2020 was up 45% worldwide, outside of China, and participation in the stock market grew 55% on mobile, thanks to apps like Robinhood in the U.S. and others worldwide, that democratized investing and trading.

TikTok had a big year, too. 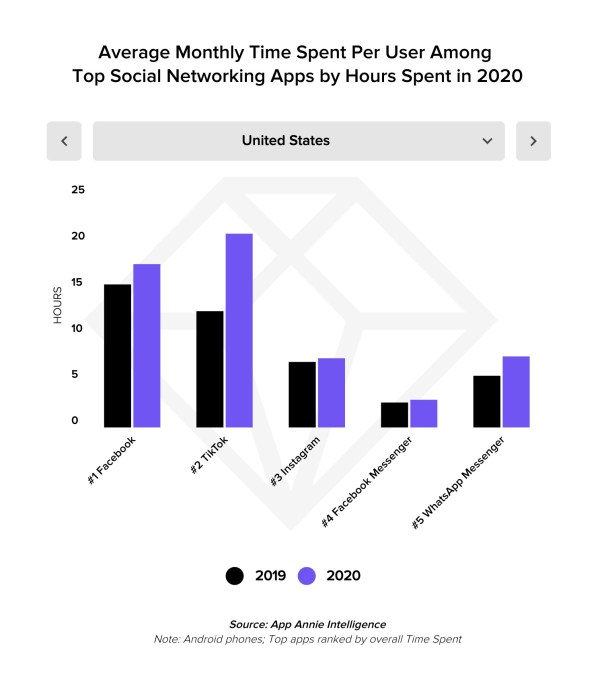 The app saw incredible 325% year-over-year growth, despite a ban in India, and ranked in the top five apps by time spent. The average monthly time spent per user also grew faster than nearly every other app analyzed, including 65% in the U.S. and 80% in the U.K., surpassing Facebook. TikTok is now on track to hit 1.2 billion active users in 2021, App Annie forecasts.

Other video services boomed in 2020, thanks to a combination of new market entrants and a lot of time spent at home. Consumers spent 40% more hours streaming on mobile devices, with time spent in streaming apps peaking in the second quarter in the west as the pandemic forced people inside. 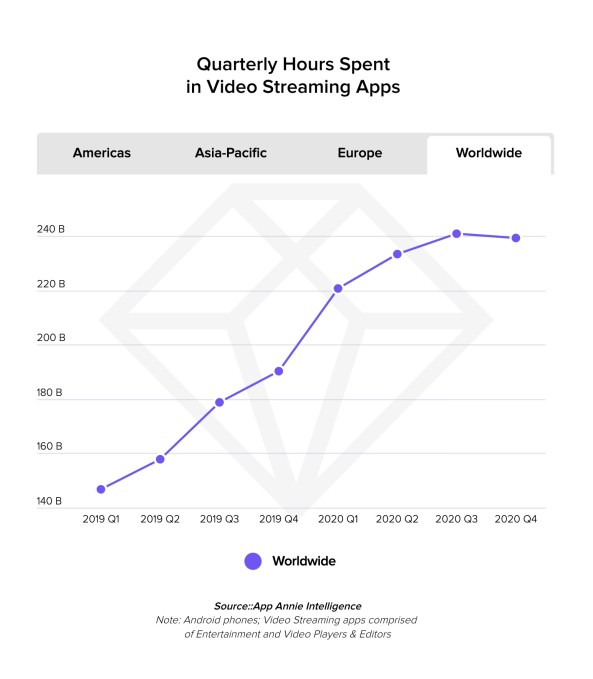 YouTube benefitted from this trend, as it became the No. 1 streaming app by time spent among all markets analyzed except China. The time spent in YouTube is up to 6x that of the next closet app at 38 hours per month.

Of course, another big story for 2020 was the rise of e-commerce amid the pandemic. This made the past year the biggest ever for mobile shopping, with an over 30% increase in time spent in Shopping apps, as measured on Android phones outside of China. 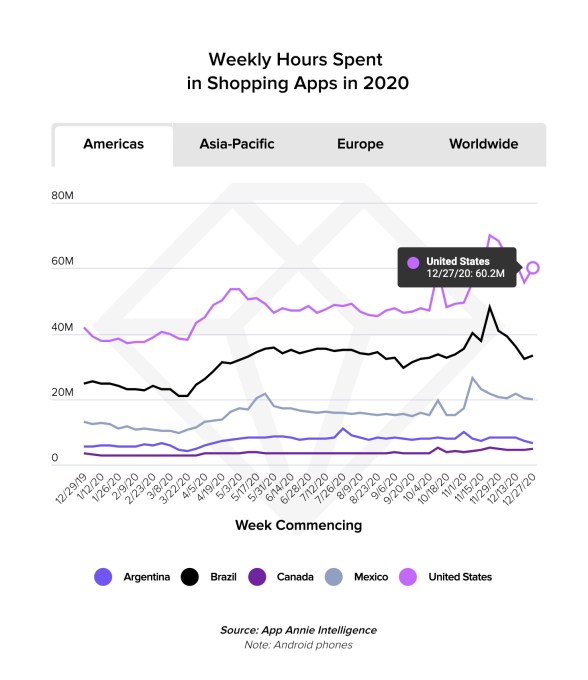 Social shopping was a big trend, with global downloads of Pinterest and Instagram growing 50% and 20% year-over-year, respectively. 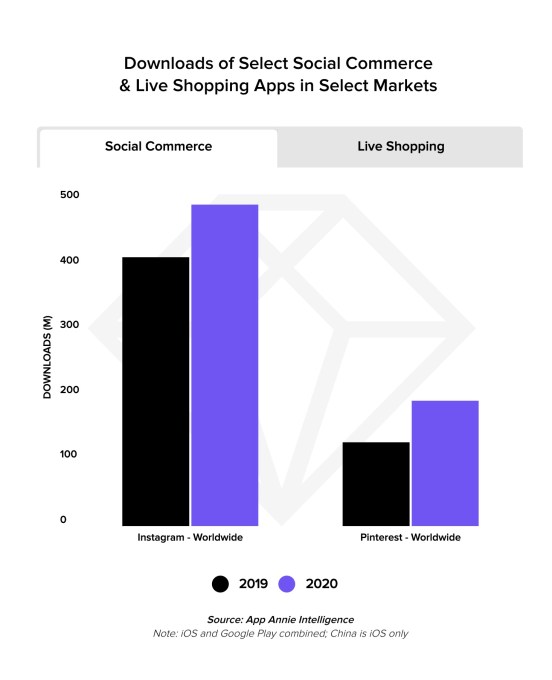 Livestreaming shopping grew, too, led by China. Downloads of live shopping TaoBao Live in China, Grip in South Korea and NTWRK in the U.S. grew 100%, 245% and 85%, respectively. NTWRK doubled in size last year, and now others are entering the space as well — including TikTok, to some extent. 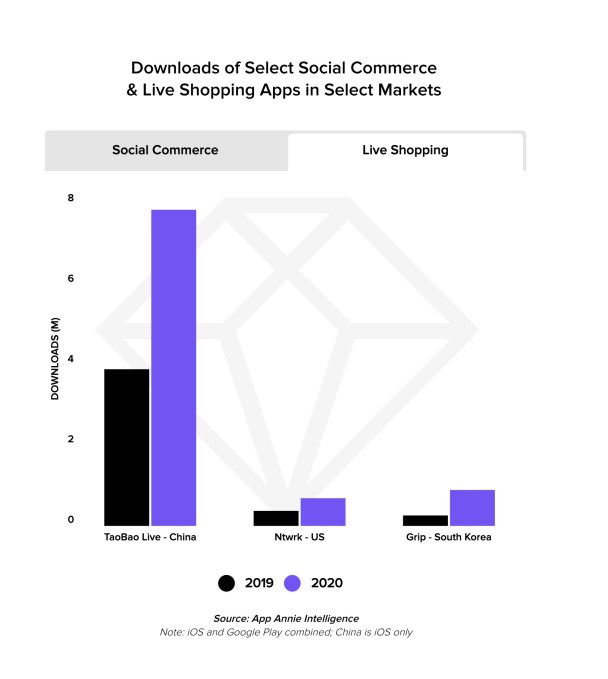 Business apps, like Zoom and Google Meet among others, grew 275% in Q4, for example, as remote work and sometimes school, continued. 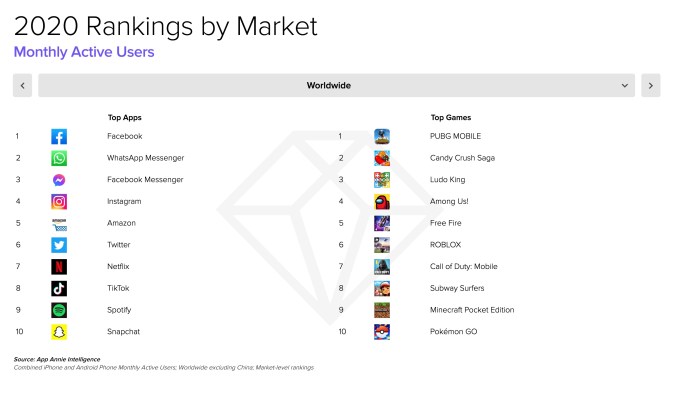 Although TikTok had been topping year-end charts, Facebook continued to beat it in terms of MAUs. Facebook-owned apps controlled the top charts by MAUs, with Facebook at No. 1 followed by WhatsApp, Messenger and Instagram. 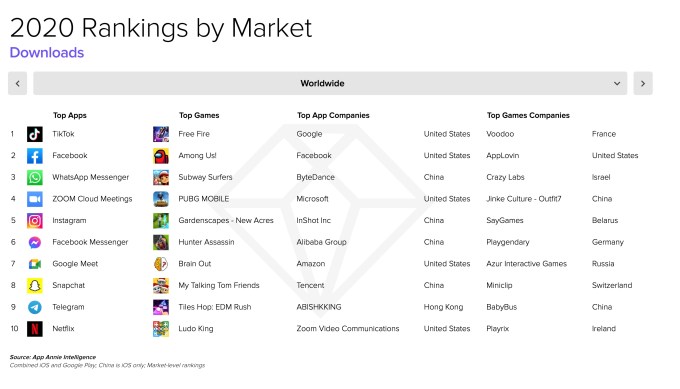 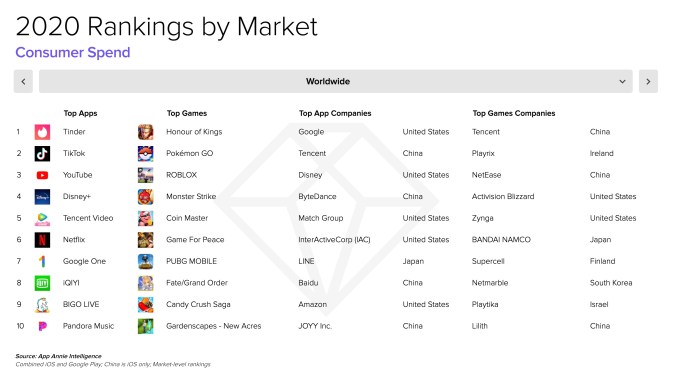 TikTok, however, had more downloads than Facebook and ranked No. 2 by consumer spending, behind Tinder.

The full report is available only as an online interactive experience this year, not a download. The report largely uses data from both the iOS App Store and Google Play, except where otherwise noted.