Brian Acton is crossing paths again with Facebook. Over more than a decade of building and operating WhatsApp, the company’s co-founder first competed against and then sold his instant messaging app to the social juggernaut. Only a few years ago he parted ways with the company that made him a billionaire in a bitter split over messaging and privacy.

Now Acton says the ongoing outrage over what Facebook has done to the messaging service he helped build is driving people to his latest project — Signal. Acton, who serves as the executive chairman of the privacy-conscious messaging app’s holding company, told TechCrunch in an interview that the user base of Signal has “exploded” in recent weeks.

“The smallest of events helped trigger the largest of outcomes,” said Acton on a video call. “We’re also excited that we are having conversations about online privacy and digital safety and people are turning to Signal as the answer to those questions.”

“It’s a great opportunity for Signal to shine and to give people a choice and alternative. It was a slow burn for three years and then a huge explosion. Now the rocket is going,” he said.

The event Acton is referring to is the recent change in data-sharing policy disclosed by WhatsApp, an app that serves more than 2 billion users worldwide. 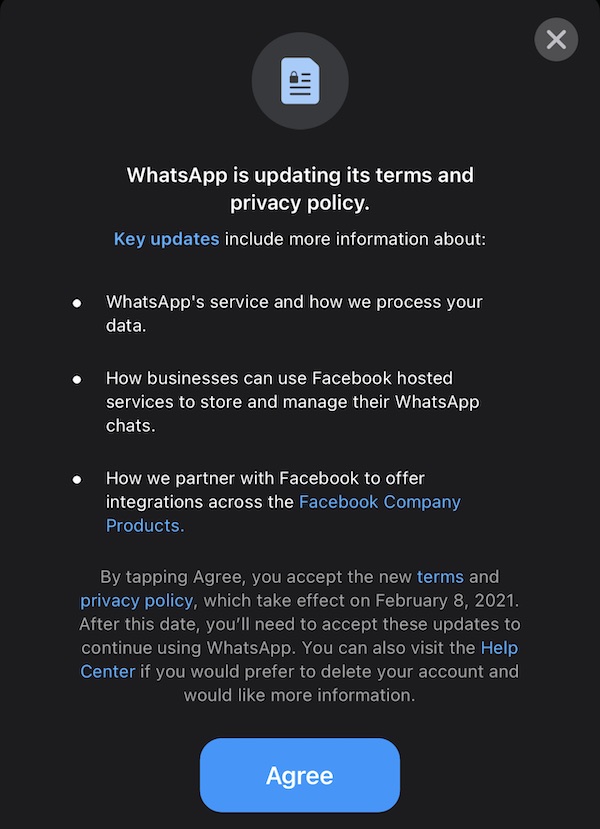 Through an in-app alert, WhatsApp has asked users in recent days to agree to new terms of conditions that grants the app the consent to share their personal data with Facebook. Users will have to agree to these terms by February 8 if they wish to continue using the app, the alert said.

Acton said WhatsApp is grappling with incorporating monetization features while still protecting people’s privacy. And its new “complicated policy” has forced WhatsApp and the media to scramble for explanations and “everyone is confused.”

Acton did not disclose how many users Signal has amassed in recent weeks, but he said the app currently ranks at the top on App Store in 40 countries and on Google Play Store in 18 countries. (Signal is not the only app that users have explored in recent days as their new home. Telegram said on Tuesday noon that more than 25 million users had joined the platform in the last 72 hours. The app now has over 525 million monthly active users.)

WhatsApp hits 2 billion users, up from 1.5 billion 2 years ago

According to mobile insight firm App Annie, data of which an industry executive shared with TechCrunch, Signal had about 20 million monthly active users globally at the end of December 2020. According to Sensor Tower, the app was downloaded more than 7.5 million times between January 6 and January 10.

Since its inception in 2018, Signal has promised that it won’t sell its users’ data and that it won’t show its users ads. In 2018, Acton invested $50 million in Signal Foundation, a check that he said helped get the ball rolling. But how does the messaging app plan to stay afloat in the future?

Signal today also relies on donations to bankroll the business — and more users mean more donors, he said. “If Signal gets to a billion users, that’s a billion donors. All we have to do is get you so excited about Signal that you want to give us a dollar or 50 rupees. The idea is that we want to earn that donation. The only way to earn that donation is building an innovative and delightful product. That’s a better relationship in my opinion,” he said.

Acton said this model has worked for the business, which keeps a small staff of below 50. Between its frugal spending and the foundation’s largesse, Signal still has some money in the bank.

Signal Foundation has also previously said that messenger is its first product, and like Mozilla and Wikimedia Foundation, it intends to expand to more categories. Acton said in the coming years, the team will take a call on whether they want to work on email and storage products, but he said the current focus remains on the messaging app.

Even as Acton has publicly urged users to get off Facebook, in our conversation he did not suggest that people should stop using WhatsApp. On the contrary, Acton said he envisions people relying on Signal for conversations with their family and close friends, and using WhatsApp for other chats. “I have no desire to do all the things that WhatsApp does. My desire is to give people a choice,” he said. “Otherwise, you’re locked into something where you have no choice. It’s not strictly a winner take-all scenario.”

One of the criticisms that WhatsApp often receives is that it does not do enough to curb the spread of false information on its platform, which has resulted in real-life casualties. I asked Acton what Signal, which also protects its users’ conversations with end-to-end encryption, would do if people started to use his app for a similar purpose. Acton said it’s a difficult challenge and while technology and platform have their own share of responsibilities, they can only do so much especially when you can’t look at the content of the conversation.

“You should be teaching your children good digital responsibility. Don’t just immediately take the information that you get. Understand its source. Understand who are trusted sources. As a society, teach every member how it works,” he said, pointing to earlier days of the internet when email scams were rampant and with time and education people learned how to identify them.