Days after a mob broke into the U.S. Capitol amid protests against Donald Trump’s 2020 election loss, another major social media platform has banned a popular pro-Trump forum. Reddit this morning confirmed that it shut down the r/donaldtrump subreddit due to “repeated policy violations” on the forum since Wednesday.

A spokesperson for the site tells TechCrunch:

Reddit’s site-wide policies prohibit content that promotes hate, or encourages, glorifies, incites, or calls for violence against groups of people or individuals. In accordance with this, we have been proactively reaching out to moderators to remind them of our policies and to offer support or resources as needed. We have also taken action to ban the community r/donaldtrump given repeated policy violations in recent days regarding the violence at the U.S. Capitol.”

While r/donaldtrump didn’t approach the infamy of some other pro-Trump subreddits, the site was a current hub for the Stop the Steal movement. The subreddit also encouraged people to attend the D.C. rally that turned into deadly violence at the Capitol: A side banner on r/donaldtrump showed an image of President Trump as Uncle Sam. “POTUS wants you in D.C. on 1/06/21” it read. 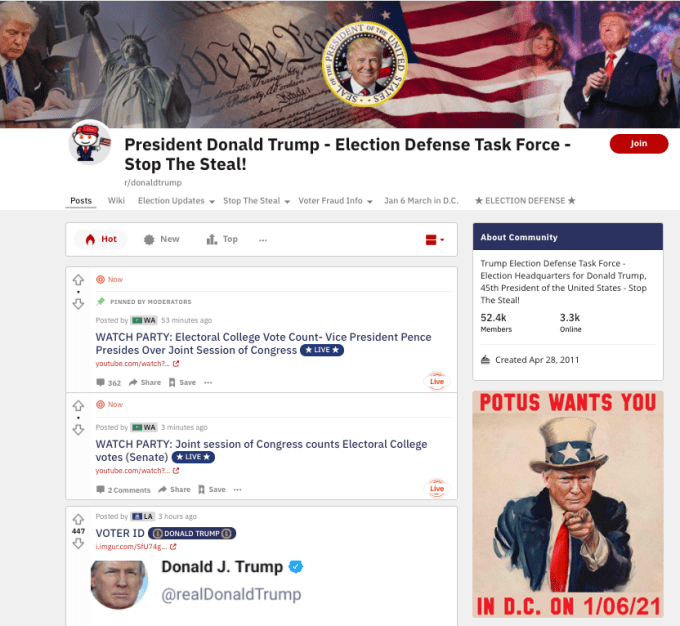 Reddit declined to provide more specifics about why the subreddit was removed, but did note that its actions against r/donaldtrump were isolated and no other subreddits were banned today. The subreddit was not related to President Trump in any official capacity.

Prior to the invasion of the Capitol, many Trump supporters attended Trump’s own event, a rally near the White House. While that event was stationary around a stage, Trump eventually encouraged its attendees to march toward Congress to continue expressing their outrage at the election results.

Reddit has historically hosted large pro-Trump communities known for their toxic behavior and open violent threats against public figures. Last June, Reddit banned the most prominent of those, controversial subreddit r/The_Donald, amid a larger sweep of pages. A year prior, Reddit quarantined r/The_Donald, making it more difficult to discover and requiring an opt-in screen for anyone seeking to visit.

Trump suspended from Twitch, as Reddit bans the ‘The_Donald’ and additional subreddits