General Motors has changed its logo, refreshed its website and kicked off a new “Everybody In” marketing campaign as part of a broader effort to illustrate the company’s transformation to a modern, fast-moving and inclusive organization that is serious about accelerating the adoption of electric vehicles.

The changes were unveiled Friday as part of GM’s presence at the virtual 2021 CES tech trade show that officially begins January 11. The restyled website will go live January 11.

“This is the fifth time GM has changed its logo in its 115-year history and probably the most progressive thing that we’ve done since 1964,” GM chief marketing officer Deborah Wahl said in a press call with reporters Friday. The all-cap GM logo has changed to a lowercase “gm” with a softer blue gradient evoking clean skies of a zero emissions future and an underline below the “m,” a nod to GM’s underlying Ultium battery architecture. The negative space around the “m” even looks like an electrical plug, said Wahl.

“It’s optimistic, it brings energy and vibrancy and reflects our view of the future,” she said. “It does build on our strong heritage, with a key element of recognizable consistency and trust. But overall, it really wants to humanize our company and this brand identity project was actually led in-house by a team of our designers who took it on knowing that it represents all 164,000 of our employees.” 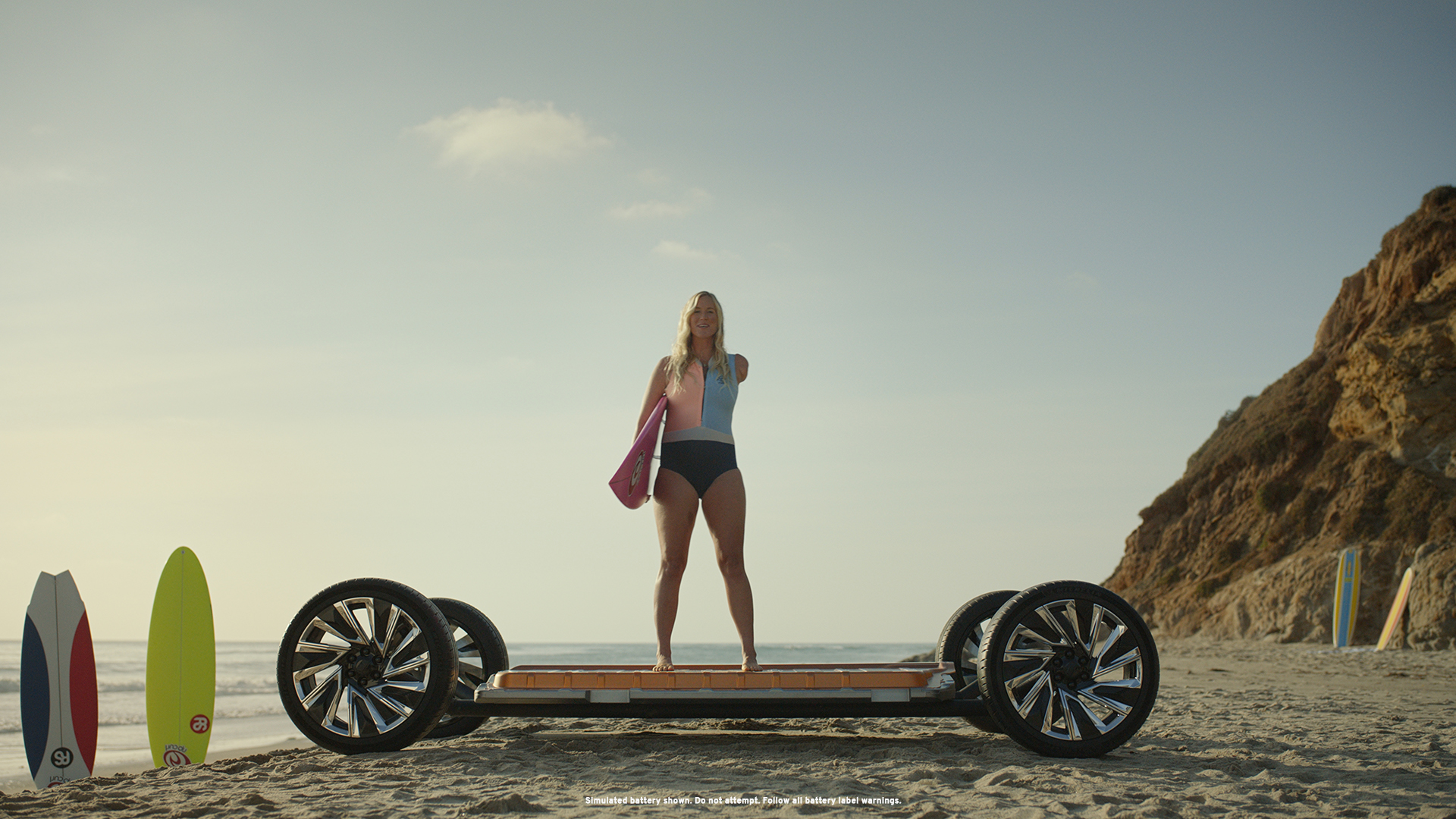 Surfer Bethany Hamilton in a new ad campaign by GM that launched in January 2021.

The effort is meant to be more than just a logo change and a slew of new ads that feature everyday folks alongside cameos from author Malcolm Gladwell, surfer Bethany Hamilton, gamer Erin A. Simon and Peloton cycling instructor Cody Rigsby. It’s meant to show a company that has truly evolved from a slow-moving legacy automaker to one that can be nimble, tech-centric and appealing to the next-generation of car owners.

GM wants to inspire; and these changes are meant to kick off its makeover.

Of course, there is real money and resources behind this evolution. GM said in November it will spend $27 billion over the next five years on the development of electric vehicles and automated technology, a 35% increase that exceeds the automaker’s investment in gas and diesel and is an effort to bring products to market faster.

GM reveals ‘Ultium,’ the heart of its EV strategy

More than half of GM’s capital spending and product development team will be devoted to electric and electric-autonomous vehicle programs, the company said at the time.

The U.S. automaker is also accelerating its go-to-market timeline and adding more EVs to its portfolio plans. GM plans to bring 30 new electric vehicles to a global market through 2025. The company had previously committed to 20 EVs by 2023. More than two-thirds of those launches will be available in North America and every one of GM’s brands, including Cadillac, GMC, Chevrolet and Buick, will be represented, according to the automaker.