It’s no secret that Tencent, the Chinese tech giant behind WeChat and a handful of blockbuster video games, is an aggressive investor. Even during 2020 when the pandemic slowed down economic activity in many parts of the world, Tencent was charging ahead with its investment ambitions.

During the year, the company participated in more than 170 funding rounds that amounted to a total of 249.5 million yuan ($38 million), according to the Chinese startup database ITJuzi. That made 2020 the most active year to date for Tencent’s investment team, which had been delivering superior results in the last decade.

By January 2020, more than 70 of Tencent’s 800 portfolio companies had gone public and more than 160 of them surpassed $100 million in valuation, Martin Lau, Tencent’s president, told a room of investees at the time. The achievement could well place Tencent side by side with some of the world’s top venture funds.

Tencent established an investment and M&A unit back in 2008 and began to seriously ramp up financing around 2012. Since 2015, it has been funding more than 100 companies per year, ITJuzi data shows. 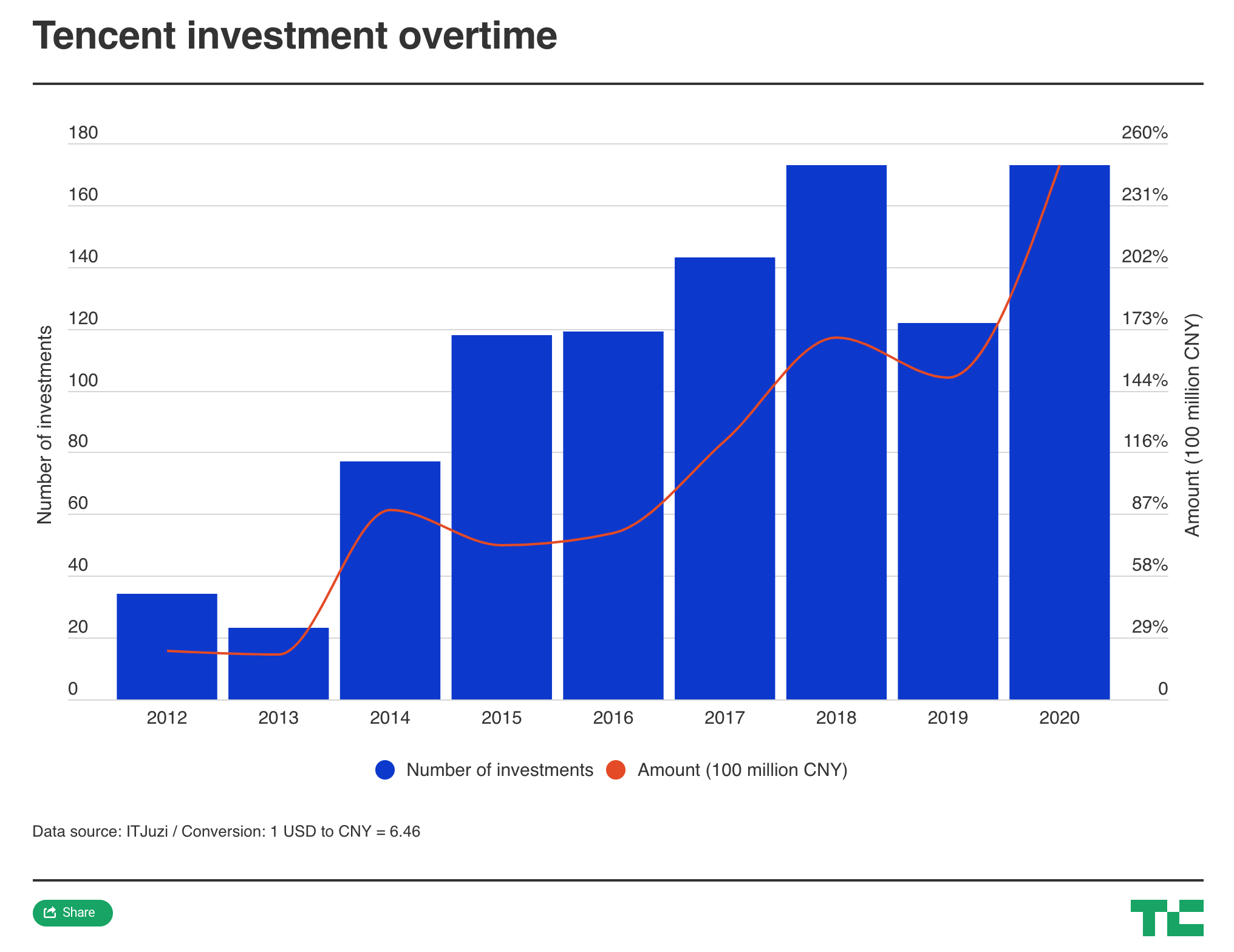 The social and entertainment giant has for long kept its funding activity close to its chest and data gleaned by third-party organizations like ITJuzi is often not exhaustive. The company did not immediately respond to TechCrunch’s questions about its investment in 2020, and the story draws mainly from public disclosures and interviews with people of knowledge.

While Tencent’s overall investment strategy has remained consistent — a diversifying portfolio with a focus on digital entertainment — it has quietly stepped up efforts in areas outside its main gaming arena. For instance, the firm has paid more attention to enterprise services ever since it announced a B2B pivot in 2018, putting more focus on cloud computing, fintech and the likes. The number of investments it made in enterprise software went from five in 2015 to 28 in 2020, according to ITJuzi.

In line with its new focus on enterprise, Tencent has also upped its game in fintech. In 2019 and 2020, it backed 18 and 15 fintech startups, respectively, ITJuzi shows, up from only four in 2015. The rise, though incremental, reflects the firm’s increased interest in an area that’s both hugely lucrative but also comes with many constraints.

In China, Tencent has long been competing with Ant Group, the Alibaba fintech affiliate, to court users in payments, lending, wealth management and even insurance. The regulatory troubles facing Ant are not exclusive to the Jack Ma empire and will likely come to daunt its smaller contenders, including Tencent’s fintech segments.

That said, Tencent is “not nearly as aggressive” as Ant when it comes to strengthening its position in China’s financial market, a person who partners with Tencent’s overseas fintech business told TechCrunch.

The company is also prudent with its fintech expansion overseas in times of geopolitical tensions. So far, it’s mostly limited its ambition to providing cross-border payment services to China’s outbound tourists, rather than serving locals directly.

“There’s a lot of scrutiny around what Tencent and Alibaba are doing within the United States and that presents challenges,” said the CEO of a Tencent-backed startup based in the U.S. who declined to be named.

Through investments, however, Tencent has familiarized itself with the foreign financial markets. In 2015, the company made one fintech investment outside China. In 2020, it funded eight, according to public data collected by Crunchbase.

A considerable portion of Tencent’s outside investments doesn’t bear strategic significance, and the company tends to let its portfolio startups operate autonomously. Partly for that reason, Tencent was slammed for prioritizing investment and financial return over product development and innovation in a viral article in 2018, titled ominously “Tencent Has No Dream.” The hands-off attitude is a stark contrast to the stranglehold practice of Alibaba, which prefers buying controlling stakes in businesses and shaking up their top management, as it did for Lazada.

But many Tencent investments do add value to its business, even when the press announcements leave out the potential strategic synergies. Over the years, Tencent has made a series of small investments in the U.S. and other Western countries. Few of them appear to bring collaborative opportunities in the near term, but Tencent would still invite executives from these companies to China where they would learn from each other.

“Tencent made those investments really just to kind of learn what people are doing in the U.S. and how it might be able to be applied in China,” said the executive from the Tencent-backed startup.

“We don’t have any near-term plans to do anything in China. But Tencent is a very reputable name, whether it’s in China or the U.S. And you know, it’s good to have the option to be able to do something more strategic in partnership with Tencent down the road.”

Tencent’s fintech investments outside China could also be conducive to the firm’s gaming expansion overseas, according to a Hong Kong-based fund manager. The goal is to have half of its gamers to be overseas users, Tencent pledged in 2019.

“For the gaming industry in Latin America and Southeast Asia, the biggest bottleneck is, surprisingly, not hardware but payments,” the fund manager told TechCrunch. “Of course, localization and compatibility are also important.”