After a year of video calls and Slack messages, the definition of workplace is set to shift again. In a post-pandemic world, some will return to the office, many will remain remote and regardless of where an employee sits, Florent Crivello, the founder of Teamflow, has raised millions for what he views as a trillion-dollar idea to make their work day easier.

Teamflow, formerly Huddle, is creating a virtual headquarters to help distributed teams collaborate and communicate from a singular platform. The startup, which has been in private beta for six months, today announced it has raised $3.9 million in a seed financing round led by Menlo Ventures’ Naomi Ionita.

It’s good timing, as Crivello notes, as the competition is “red hot.” There are dozens of other virtual HQ platforms, some venture-backed and some bootstrapped, similarly mixing gamification and productivity into a service.

“I think every engineer and every tech person in the Valley has been having a very first-hand experience of this problem over the last year,” Crivello said.

Crivello, who previously led teams at Uber, sees Teamflow’s focus on virtual work, instead of virtual socializing, as its competitive advantage against other platforms. Competitors include Branch, which has a more social feel, and Hopin, a platform last valued at $2 billion, which produces digital conferences.

A quick tour through Teamflow illustrates its emphasis on productivity over aesthetic. When you enter the virtual space, you’re greeted with a sidebar of options ranging from white boards, countdown timers, and soon integrations with Notion and Google Docs.

Crivello views Teamflow as being a response to the very “app-centric” world of remote work right now. The platform can be the collaboration layer that brings all the apps out of unorganized tab hell and into one place. 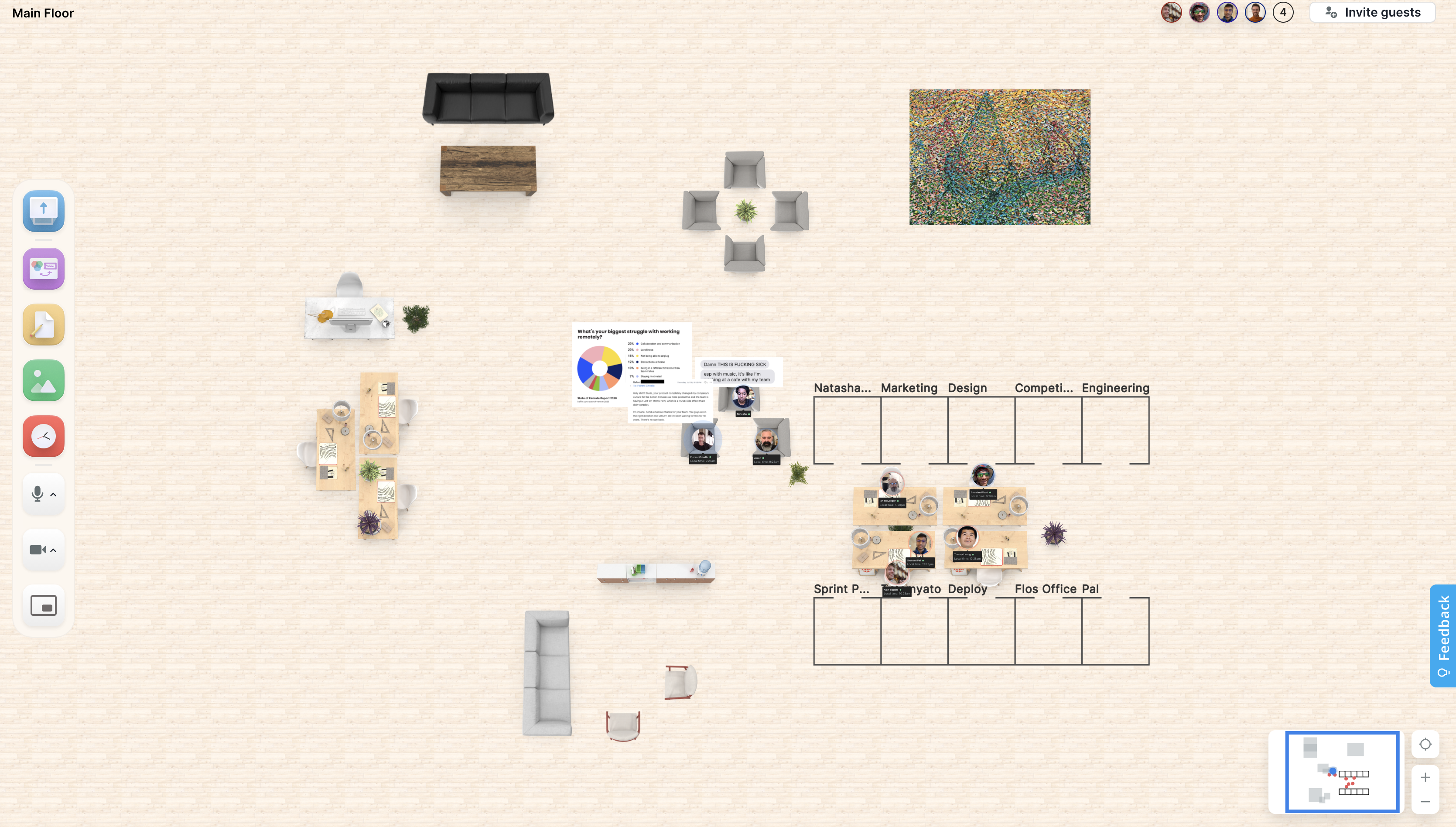 Teamflow uses spatial technology to give employees the feel of spontaneity. If you walk — or toggle — past a co-worker, you’ll be able to join in conversation. The farther you move, the less you hear. There are also breakout rooms where people can enter to have focused, invite-only meetings.

The product has shown some signs of growth since launching its beta. There is 30% growth in hours on the platform week over week, bringing a total of over 50,000 hours of user testing into the platform experience. There are 1,000 users on the waitlist.

“We believe that we are this thing you open in the morning and leave open all day,” Crivello said.

While Teamflow is focusing heavily on productivity, user design does matter when you’re trying to convince consumers to spend an entire work day on your app. Teamflow will need to make more investments in its experience to give it the feel and culture of a virtual HQ, versus another place for employees to spend screen time. It’s why some competitors are opting for a gamified approach.

Any virtual HQ company will have to convince users to exist passively on its platform for a meaningful amount of time, every single day.

If all goes well, Teamflow is looking to be a remote work solution that can replace Slack and Zoom. Crivello says that he has “several customers” who have stopped using both apps altogether, and Teamflow is currently building an internal chat feature that rivals Slack.

The cost for a subscription per starts at $15 a month, according to the most recent pricing information.

“There’s so much more to remote work collaboration than communication,” Crivello said. Slack and Zoom’s primary features are connecting employees to each other to talk; while he hopes that Teamflow allows employees to talk and work in one place.

Undoubtedly, the opportunity for a platform that can get widespread adoption around distributed teams is grandiose. Pandemic or not, Teamflow thinks that the world has experienced a tipping point that will bring distributed work mainstream. Founders will be looking for solutions to keep their teams happy and productivity high.

“Now, if you don’t offer remote work, you’re at a competitive disadvantage [as a company],” Crivello said.

The beauty of early-stage startups is that long-term success doesn’t need to be obvious from the get go. Yet, when it comes to Teamflow, or any virtual HQ platform, the validation will be simple to prove (or disprove) the moment that post-pandemic consumer habits materialize.