Revenue-based investing (RBI), also known as revenue-based financing, or revenue-share investing,1 is a natural next step for the private equity and early-stage venture investment industry. However, due to RBI being a relatively new model, publicly available data is limited.

To address this foundational gap in market information, we have developed a proprietary data set of 32 RBI investment firms, 57 distinct funds and 134 companies that have secured revenue-based investing.

Bootstrapp developed this extensive analysis on revenue-based investing for the purpose of accelerating the shift toward greater transparency and standardization within the industry.

Upon thoroughly analyzing the data, we’ve been able to identify the total number of investment firms and amount of capital that comprise the RBI industry, the specific verticals and business models that are most actively leveraging RBI, and the typical profile of companies that access this form of capital.

These findings are summarized below; a full industry-spanning report that defines the overall revenue-based investing market as it stands today is available to download here.

As context, the financial structures used by VCs haven’t evolved much since they first emerged in 1957. Today, the model is almost precisely the same, with only incremental changes such as more efficient capital markets and industry standards for structuring deals, pricing companies and more.

More recently, we have seen numerous new investment models and financing instruments, including shared earnings agreements and point-of-sale capital. One of the most prominent and popular new models for investors is revenue-based investing (RBI).

However, because the model is new, there is a lack of publicly available data, industry standards have not yet been fully established, and similarly to the equity investment market, there is little transparency into the cost of capital that investees truly pay in exchange for taking on a revenue-based investment.

Thankfully, there have been some notable efforts to drive transparency in the RBI market. For example, Bigfoot Capital open-sourced its RBI model, outlining it in a blog post and sharing their RBI financial model and anonymized term sheet, but a thorough, quantitative, industry-wide analysis has not been conducted until now.

In order to raise RBI, the company must normally be generating revenue, but is not necessarily required to be profitable, although profitability, or at least a near-term path to profitability, is often an important criteria for many investors. “For startups with revenue, RBI may be a good option because, even though the startup may not be profitable, it can reduce dilution — especially for founders,” said Emily Campbell of The Campbell Firm PLLC, a law firm that represents serial entrepreneurs and venture-backed businesses.

“Taking in some smart equity or convertible debt and balancing that money with other financing can be a good strategy for a startup,” she said. Profitability decreases the risk of default and assures that the investee has the ability to service the debt.

In regards to the applications that are best suited to RBI, B2B software-as-a-service (SaaS) companies rise to the top of the list primarily because one is able to — in essence — securitize the revenue being generated by a company and then lend capital against that theoretical security. In addition to SaaS companies, RBI is being used quite frequently in the impact investing community as it solves the problem of a lack of normal M&A or IPO exit paths for impact-driven companies and are sometimes marketed as a nonextractive form of investment structure.

Beyond B2B SaaS and impact investing, many other verticals are adopting the model as well, including e-commerce/D2C, consumer software, food and beverage, and more. It ought to be noted, however, that regardless of the specific business model a company employs, the investee is typically required to have repeatable sales and a track record that demonstrates a strong revenue stream, and therefore a clear ability to return the capital to the investors.

We have identified 32 U.S.-based firms actively investing via a revenue-based investing instrument, with those firms managing 57 distinct funds representing an estimated $4.31 billion in capital. Through our analysis of those firms, funds and investees, we found that:

Firms were included in the data set (and by extension, determined to be actively making revenue-based investments) if they:

The specific number of firms we believe to be quite accurate, representing only active, U.S.-based revenue-based investing firms. The number of funds, however, may be underestimated. This is due to the fact that, although each firm is associated with at least one fund, we did not include additional funds beyond that unless they were confirmed through other sources, such as the firms’ public communications, their SEC Form D or other sources as outlined in the methodology section at the conclusion of the full report.

The total amount of RBI capital that has already been allocated to companies across all firms and all years is $2.1 billion. However, it should be noted that this includes the outliers in our dataset, namely Kapitus, Clearbanc, Braavo and United Capital Source. Once we remove those firms, the remaining 28 firms, representing 51 funds, have allocated $592.8 million.

This figure of $592.8 million is almost certainly an underestimate due to the fact that only 19 of 32 firms had a known “amount of allocated capital,” whereas the remaining 13 firms have unknown values (i.e., zeros) for the amount of capital they have allocated thus far. Therefore, if all 32 firms had a valid and confirmed amount of allocated capital, we can logically conclude that the number would rise dramatically from the current figure of $592.8 million. 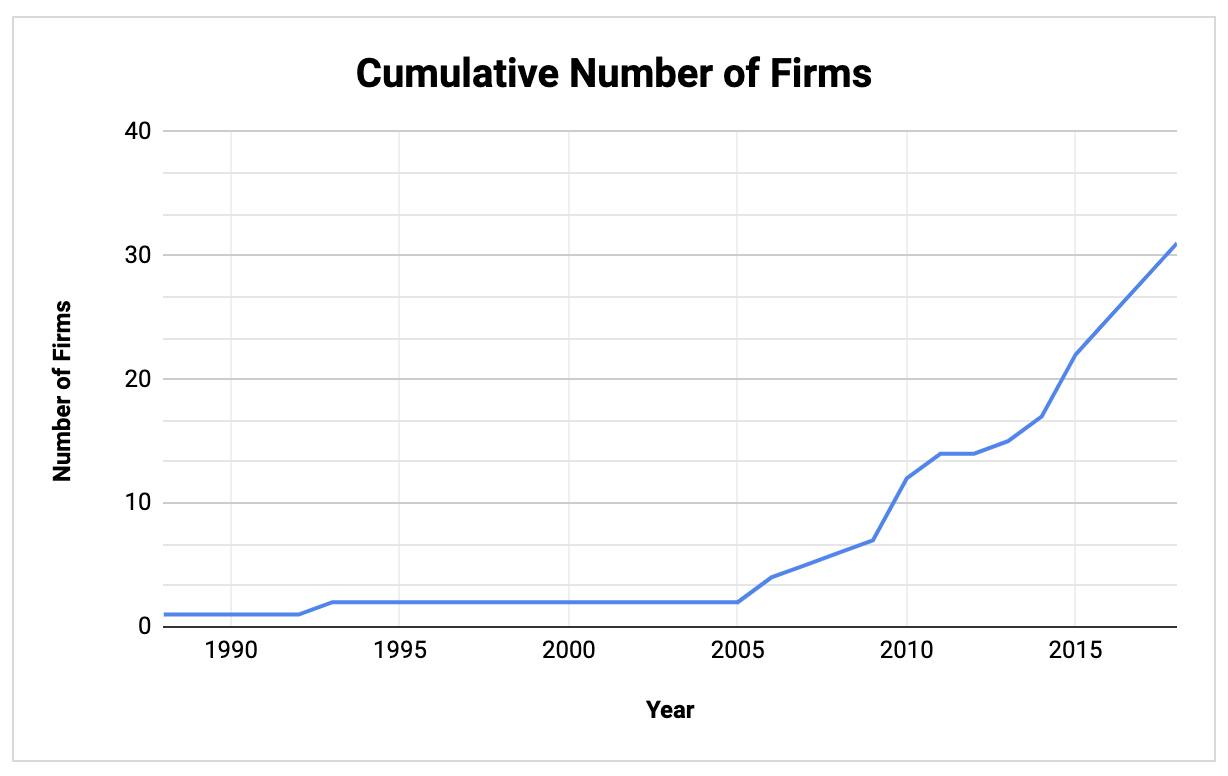