The rise of distributed teams in response to the coronavirus has led to more video-conferencing meetings for all of us. As offices remain closed, distributed work is forcing companies to figure out a better way than Zoom or Google Hangouts to meet with employees across time zones and teams.

Rewatch wants to make meetings more efficient, and maybe even shorter. Co-founded by Connor Sears and Scott Goldman, Rewatch creates and organizes private video channels for companies to store meetings so employees can sift through them on their own time.

And at its core, Rewatch is a counterintuitive play: The startup thinks it can combat “Zoom fatigue” by giving employees more ways to watch video-conferencing calls.

The product works like this: Companies can record their meetings, over Google Hangouts or Zoom, and then Rewatch archives the meetings into a database. Using tags and notes, the videos become more searchable and easier to find. For example, you can tag a co-worker in a meeting in which they got an unexpected shout-out. Or you can search for the last time a manager brought up the project you’re working on. 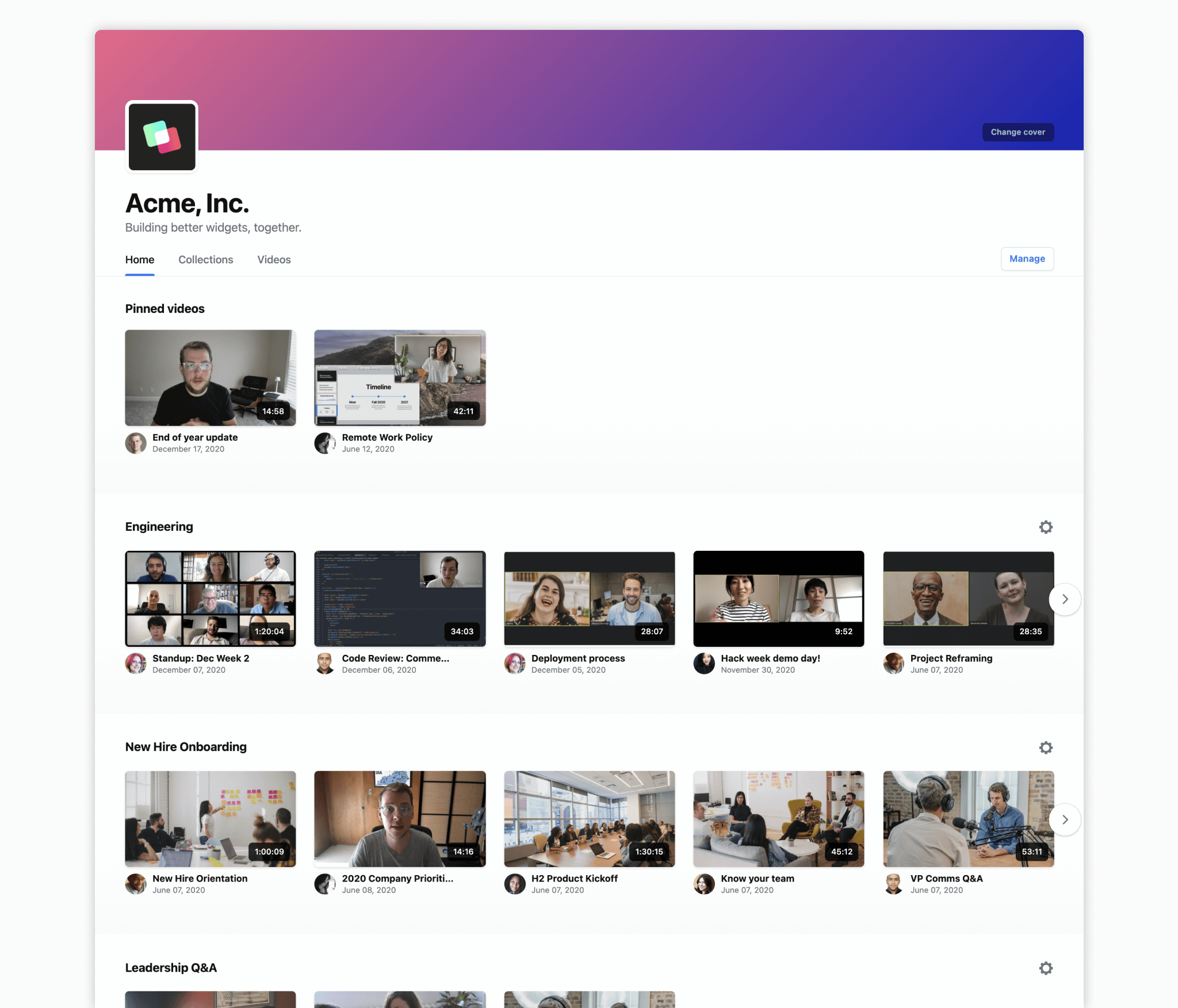 The video libraries, which the company describes as “mini-YouTube channels,” also include transcriptions of all meetings. Rewatch is turning synchronous meetings into asynchronous bulletins and documents. 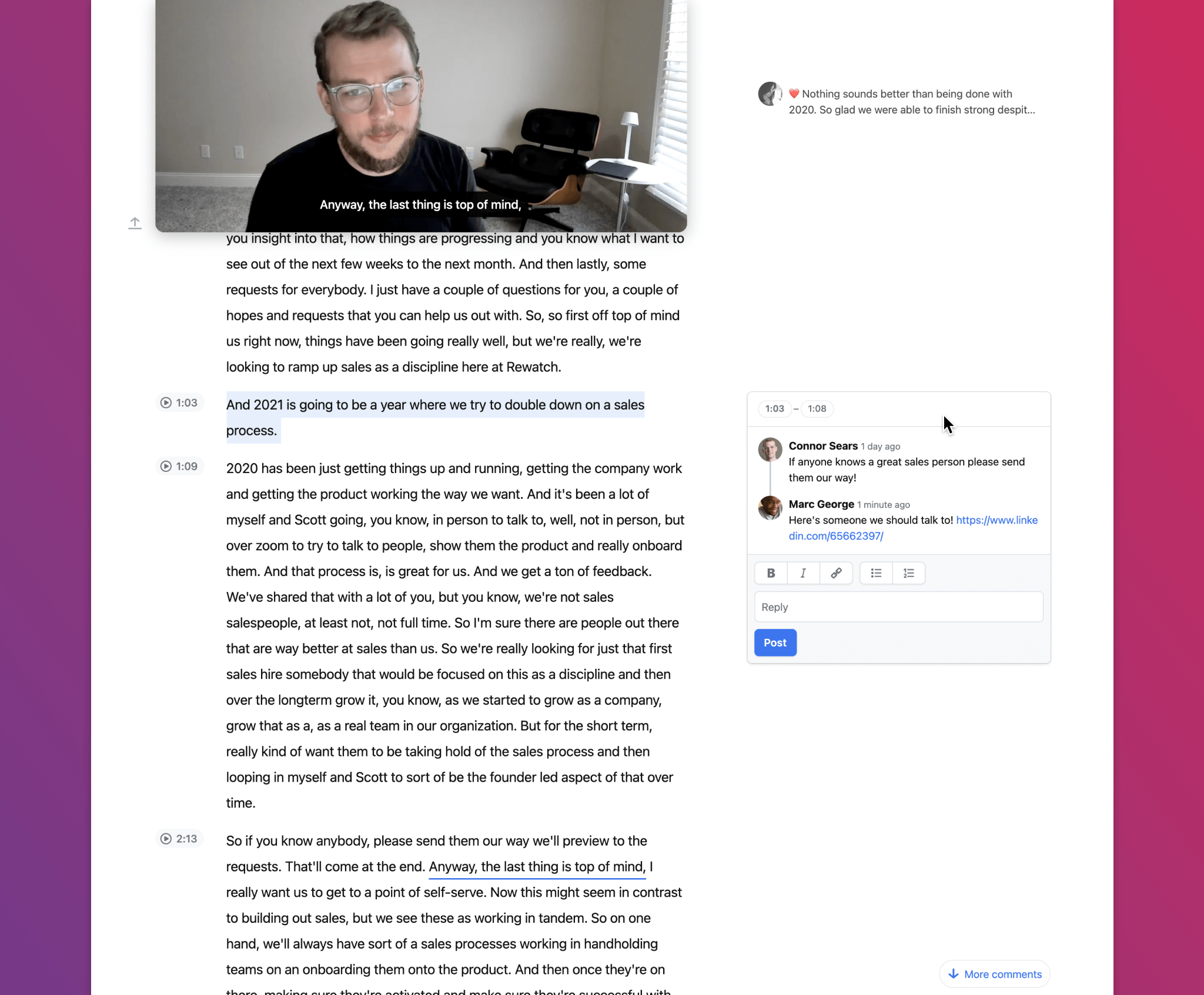 “In the past, the only way to scale a meeting was just to have a longer meeting, or more meetings,” Sears said.

If Rewatch works, the founders hope to see meetings shift from squares of muted floating heads to interactive across various teams and time zones with text and annotations.

Sears first had the idea for Rewatch when he was an employee at GitHub, a space for developers. GitHub, which is fully distributed, created an internal YouTube channel to enable employees across time zones to work with one another. Now, the two co-founders are trying to take one of GitHub’s internally loved features and bring it, and more, to the mainstream.

So far, the startup has been able to land a number of customers, including GitHub, although it wouldn’t disclose total numbers. When it launches, the company will charge a subscription fee, but Sears and Goldman have not disclosed the pricing yet.

One of Rewatch’s competitors is Google Drive, which has lagged in creativity around storing and structuring video content. The startup competes with the tool by adding more search-friendly features for video like live transcriptions. Other competitors include Berlin-based Acapela, which is working on asynchronous meetings, and Storyboard, a podcast company that helps directors publish on-demand audio content to their stakeholders. Both companies have recently raised millions of dollars.

While innovation around how meetings are held certainly feels important, Rewatch and others are betting that employees will turn to these content repositories on a semi-often basis and engage with them in a meaningful way. But how many of us watch the standup we missed while on vacation? The business is contingent on that singular consumer habit.

This reality doesn’t mean innovation isn’t welcome. It just means that a huge shift in consumer habits needs to change in order for this startup, and many others, to be successful. And that too-early-to-know reality makes the fact that investors have put millions into the startup even more compelling.

Rewatch has convinced a number investors on its vision. The startup tells TechCrunch that it has raised a $2 million pre-seed round led by Semil Shah at Haystack with participation from Kent Goldman at Upside Partnership. Other investors include Gumroad CEO Sahil Lavingia, GitHub CTO Jason Warner and SVP of Zendesk Jason Smale.

Startup cynicism and Substack, or Clubhouse, or Miami or …