As the United States entered its first wave of COVID-19 lockdowns, there were wide expectations in startup land that a reckoning had arrived. But the expected comeuppance of high-burn, high-growth startups fueled by cheap capital provided by venture capitalists raising ever-larger funds, failed to arrive.

Instead, the very opposite came to pass.

Layoffs happened swiftly and aggressively during the early months of the pandemic era. But by the middle of Q2, venture activity had warmed and third quarter dealmaking felt swift and competitive, with some investors describing it as the hottest summer in recent years.

Venture capital as an asset class has survived the pandemic’s stress test.

But somewhat lost amongst the splashy megarounds and high-interest IPOs that can dominate the news cycle were seed-stage startups. The raw little companies that represent the grist that will shape itself into the next set of giants.

TechCrunch explored what happened in seed investing to uncover what was missed amidst the storm and fury of late-stage startup activity. According to a TechCrunch analysis of PitchBook data and a survey of venture capitalists, a few trends became clear.

First, the pattern of rising seed-check sizes seen in prior years continued despite the tumultuous business climate. Second, more expensive and larger seed deals were not only caused by excessive capital present in the private markets. Instead, COVID-19 shook up which startups were considered attractive by private investors. And the changeup did not necessarily raise their number.

Let’s dig into the data and see what it can teach us about this wild year. Then we’ll hear from Eniac Ventures’ Nihal Mehta, Freestyle’s Jenny Lefcourt, Pear VC’s Mar Hershenson and Contrary Capital’s Eric Tarczynski about what they saw in 2020 while writing a chunk of the checks that our data encompasses.

The American seed market in 2020

If you didn’t think much about seed in 2020, you’re not alone. Late, huge rounds consumed most of the media’s oxygen, leaving smaller startups to compete for scraps of attention. There was so much late-stage activity — around 90 $100 million or larger rounds in Q3, for example — it was difficult for smaller investments to command attention.

But despite living in the background, the dollars invested into seed-stage startups in the United States had an up-and-down year that was fascinating: 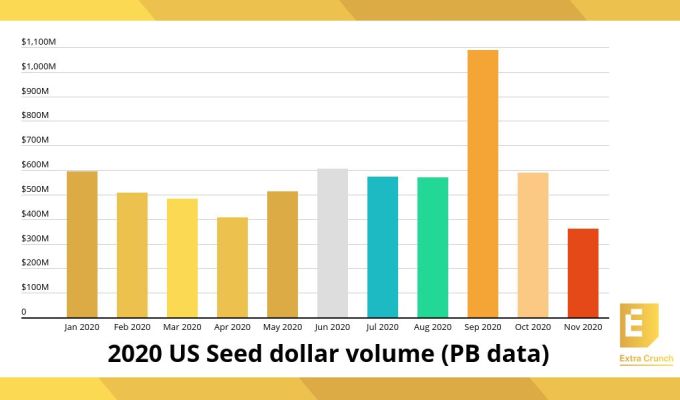 Seed dollar volume fell as Q1 progressed, reaching a 2020 nadir in April, the start of Q2. But as May arrived, the pace at which investors put money into seed-stage startups accelerated, recovering to January levels — which is to say, pre-pandemic — by June. The COVID dip, for seed, then, was a short-term affair.