You’re probably investing in an email newsletter these days, whether you’re an international brand, a nonprofit or a local news publisher.

Maybe email is even your focus now, because you got burned by Facebook, Google or other closed platforms during the past decade. The problem is that the tools you have available are probably too generic, or are built specifically for marketers. What if you want to make money from the newsletter content itself?

Letterhead is slicing through the vast market of existing email SaaS products, betting that a cross-section of revenue and collaboration needs are not being met properly for newsletter creators of all types. Instead, it puts all ad sales, paid subscriptions and newsletter content management into a single, streamlined product.

Its viewpoints on the future of newsletters — and its customer base so far — are intriguingly different from your typical SaaS startup in Silicon Valley. And there’s a reason for that. Letterhead is actually a product spinout of a community publisher in Miami called WhereBy.Us that began life in 2014 by launching a local media site, The New Tropic. The publication became a rare success in online local news, once it focused on the email newsletter format.

“Initially, our goal was to create a local media product that would help people learn about the city, get more involved and serve a new generation of local news users,” co-founder and CEO Chris Sopher tells me by video chat. “Our ideas had included opening a bar, events and all kinds of other stuff. We quickly pared that back to the things that were working, and email was at the top of the list.”

Advertising inventory in these emails was in high demand, so the company built out a self-service payment system for advertisers, which allowed its newsletter writers to easily publish the correct ads in the correct place.

With this business model and technology as a foundation, it launched or acquired newsletters in Seattle, Portland, Orlando and Pittsburgh. Through this process, it has continued to improve the tool itself.

It also discovered the broader demand.

“People would reach out to us and say ‘I love this newsletter, what tools do you use?’ because it was such a pain to produce emails with all of the different tools out there,” Sopher explains.

(Those tools, in this author’s experience, generally include a combination of Mailchimp, Constant Contact or Sailthru, together with your main web publishing CMS like WordPress, your separate subscription software like Piano and however you are managing ads.)

“We’d tell people that we used our own internal tools and they’d say ‘oh, can we use those, too? And we’d say ‘no, that’s not what we’re doing.’ Eventually, we said no enough that we looked at each other and said, ‘we should figure out how to get to yes on this.’ And that’s where Letterhead came from.” 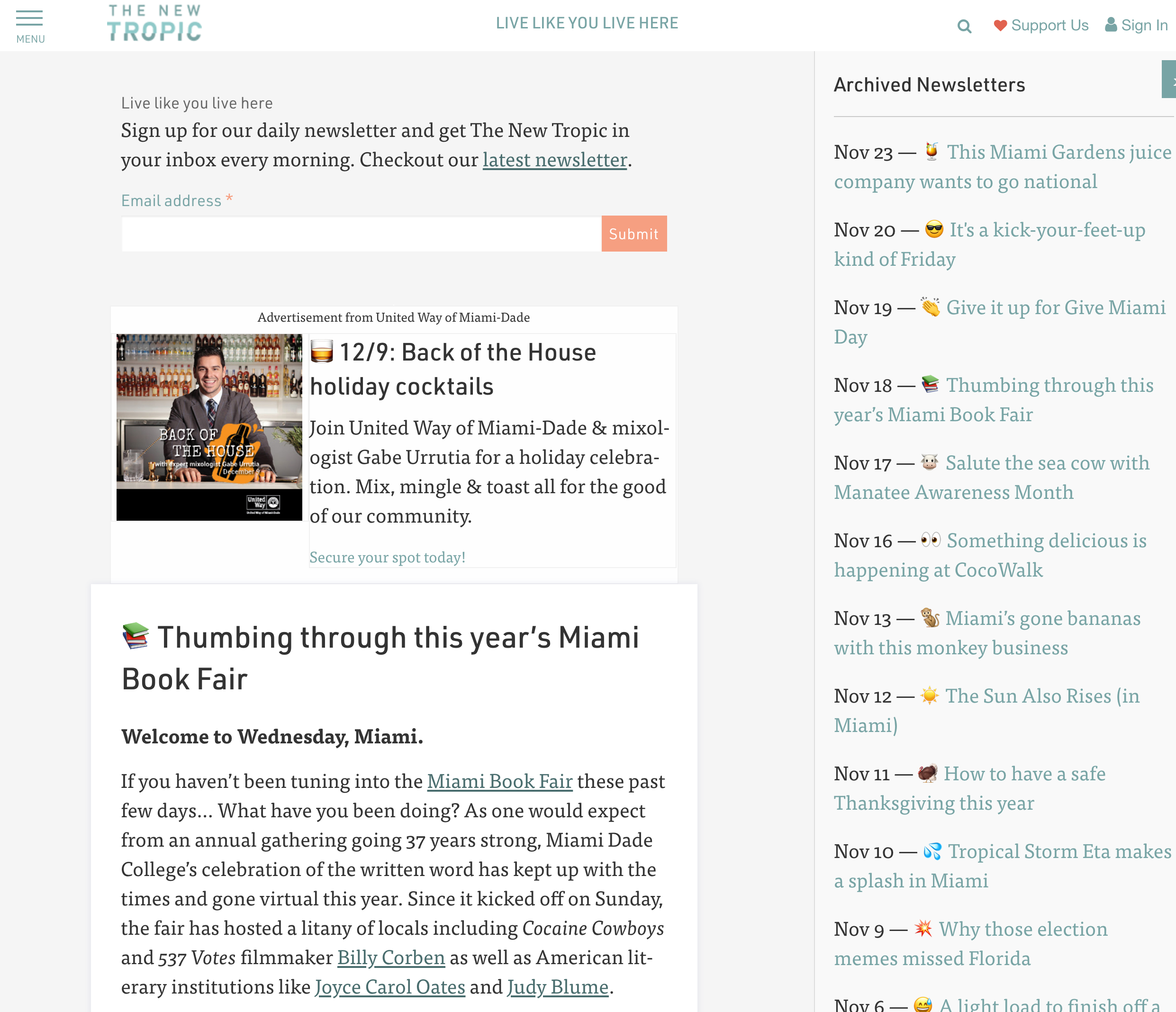 Today, WhereBy.Us is one of the few success stories from a catastrophic decade in local news. Sopher says that its five city newsletters are comfortably profitable via ads overall — having recovered from a pandemic dip earlier this year — and are continuing to grow.

But the new focus is on Letterhead’s tools, including the ad system, a new paid subscription feature that lets you do things like add paywalled subsections of emails, easy-to-use text editing and template formatting, and soon, analytics.

“Sponsorships and ads were [needs] we heard about most, so that’s where we started,” co-founder and COO Rebekah Monson said by email. “The bigger vision is to create a set of tools and services that feed into each other in one easy place, and help all of those revenue streams grow, eventually branching out from email. We’re seeing demand for that not just from traditional media publishers, but also from marketers, nonprofits, universities, professional associations — all these folks who have engaged communities and want to deepen those relationships and bring in revenue through that engagement.”

On the spectrum of email newsletter products, Letterhead’s focus on revenues and team collaboration places it adjacent to Substack’s focus on the individual writer, and to other products like Lede designed specifically around subscription news organizations.

Letterhead is explicitly a hosted software solution that you pay for your organization to use, not an open-source project like Ghost. Like how Shopify provides a suite of white-label e-commerce features for anyone who wants to run an online business, it wants to be the engine humming away under the hood of your newsletter.

On the much broader spectrum of all email solutions in the SaaS world, Letterhead is betting that its understanding of the market and its product design can beat out the brutally competitive world of SaaS email products.

Since soft-launching earlier this year, Sopher says it has already been signing up a broad range of customers. Examples he cited include startups (Shoot My Travel), nonprofits (Vida y Salud and Refresh) and political groups (OD Action) as customers, as well as local news publishers, of course (VTDigger, Choose954 and Santa Cruz Local). Letterhead is also a partner in WordPress’ News Pack program, which is a collection of plug-ins for publishers on that CMS.

“We’re always going to have an affinity to media publishing… but there is a broader need than just that industry,” he explains. “And we’re also seeing this moment where a lot of other organizations are participating in [publishing]. You name a topic, there will be professional reporters out there doing great work. But it’s also pretty likely that there is a brand, an agency, a nonprofit or some other organization creating interesting and useful content, and building a community around it — that would not raise its hand and say that it is part of the news industry.”

Sopher also notes that the product is designed to be modular, so that companies can just use parts of it and integrate its features with other email service providers and most any tech stack.

“What we’re seeing is that smaller customers are coming on for the simplicity of having it all in one place without sacrificing monetization,” he adds, “but larger customers are choosing us as one part of their stack as they build a multifaceted business or grow out of tools geared more to individual or independent creators.”

With the revenue options in place, Sopher says analytics and additional ESP options are coming next.

Over the course of its history, WhereBy.Us has raised $5 million from across tech and media. Backers include the Knight Foundation, Jason Calacanis’ LAUNCH fund, Band of Angels, McClatchy, hundreds of smaller investors via Republic and SeedInvest and, most recently, a round led by Brick Capital.