NextMind debuted its Dev Kit hardware at CES last year, but the hardware is now actually shipping, and the startup shared with me the production version to take a test drive. The NextMind controller is a sensor that reads electrical signals from your brain’s visual cortex, and translates those into input signals for a connected PC. A lot of companies have developed novel input solutions that use either eye tracking or electrical impulse input from the body, but NextMind’s is the first I’ve tried that worked instantly and wonderfully, providing a truly amazing experience of a kind that’s hard to find in the current world of relatively mature computing paradigms.

NextMind’s developer kit is just that — a product aimed at developers that’s meant to give them everything they need to get building software that works with NextMind’s hardware and APIs. It includes the NextMind sensor, which works with a range of headgear, including simple straps, Oculus VR headsets and even baseball hats, along with the software and SDK required to make it work on your PC. 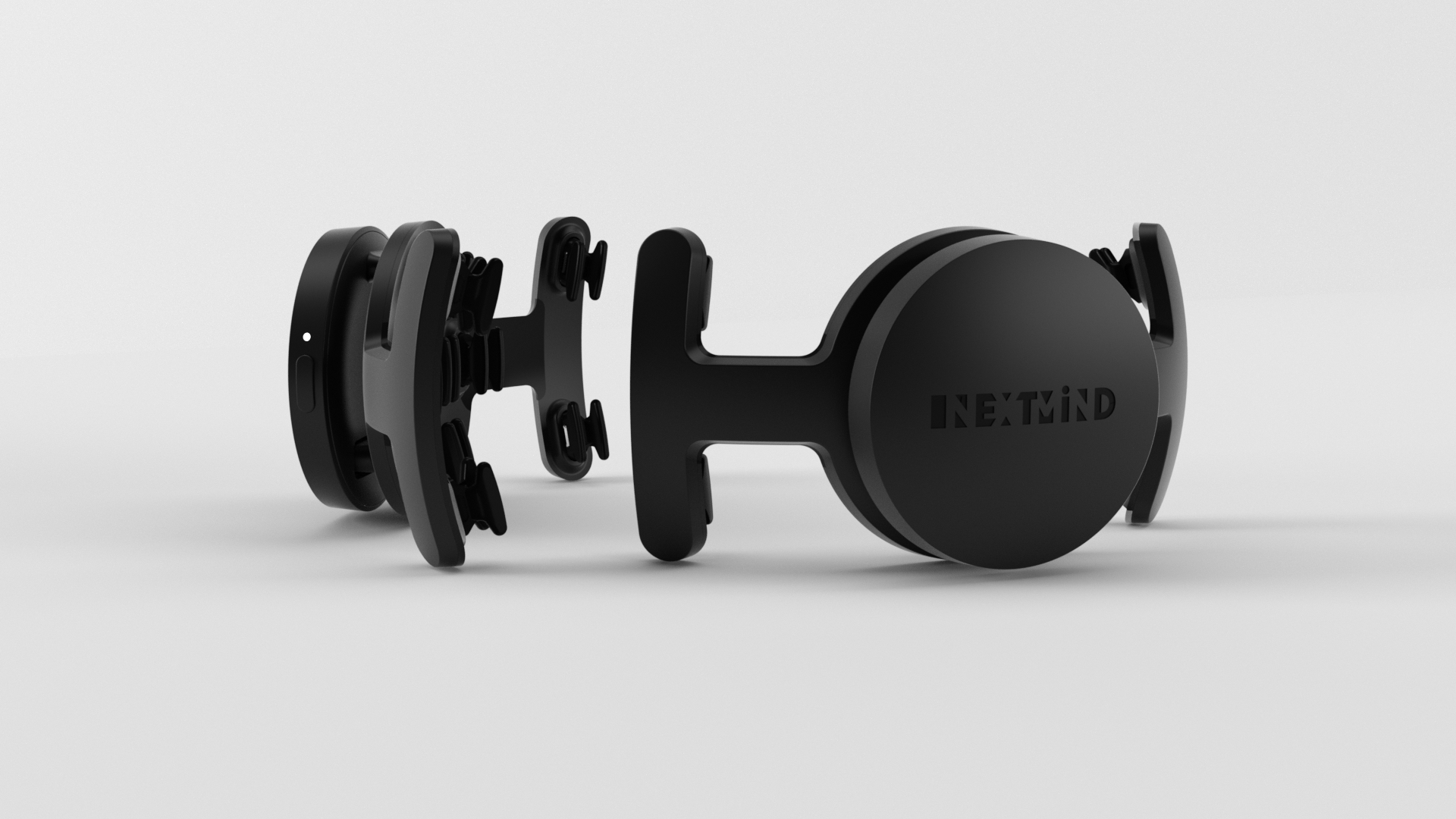 The package that NextMind provided me included the sensor, a fabric headband, a Surface PC with the engine pre-installed and a USB gamepad for use with one of the company’s pre-built software demos.

The sensor itself is lightweight, and can operate for up to eight hours continuously on a single charge. It can charge via USB-C, and its software is compatible with both Mac and PC, along with Oculus, HTC Vive and also Microsoft’s HoloLens.

The NextMind sensor itself is surprisingly small and light — it fits in the palm of your hand, with two arms that extend slightly beyond that. It features an integrated clip mount that can be used to attach it to just about anything to secure it to your head. In terms of fit, you just need to ensure that the nine sets of two-pronged electrode sensors make contact with your skin, which NextMind provides instructions on doing by essentially making sure it straps snugly to your head, and then “combing” the device slightly (moving it up and down to get your hair out of the way).

It wears comfortably, though you will notice the electrodes pressing into your skin, especially over longer use periods. The ability to use a standard baseball cap with the clip makes it super convenient to install and wear, and it worked with the Oculus Rift and Oculus Quest headstraps easily and instantly, too. 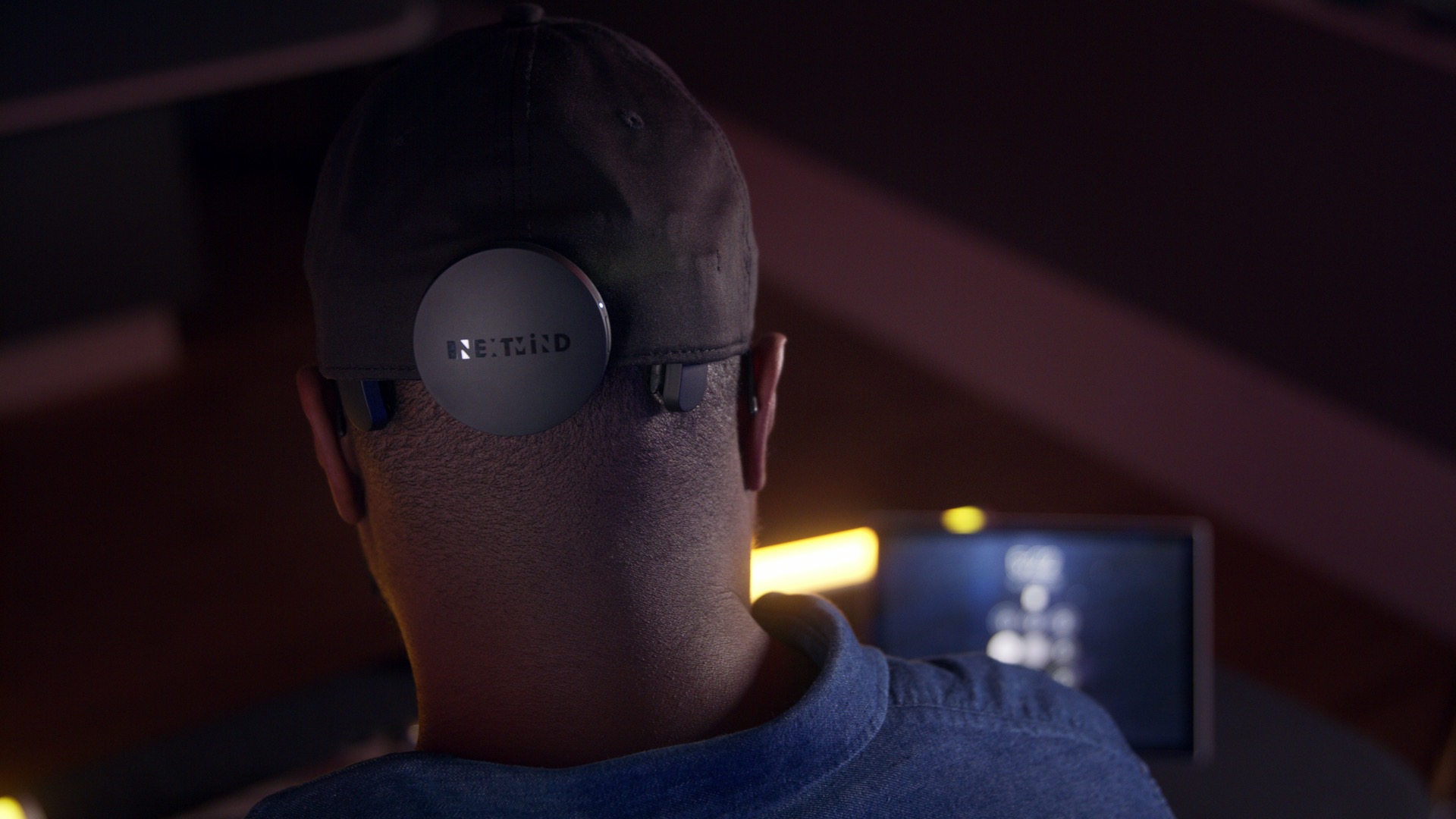 Setup was a breeze. I was guided by NextMind’s co-creators, but the app provides clear instructions as well. There’s a calibration process during which you look at an animation being displayed on the host PC, which helps the sensor identify the specific signals your occipital lobe is emitting when performing the target behaviour that you’ll later use to actually interact with NextMind-optimized software.

Here’s where it’s worth pausing to explain how NextMind is actually “reading your thoughts”: The sensor basically learns what it looks like when your brain is engaged in what the company calls “active, visual focus.” It does this using a common signal that it overlays on controllable elements of a software’s graphical user interface. That way, when you focus on a specific item, it can translate that into a “press” action, or a “hold and move,” or any other number of potential output results.

NextMind’s system is elegantly simple in conception, which is probably why it feels so powerful and rich in use. After the calibration process, I immediately jumped into the demos and was performing a range of actions effectively with my brain. First was media playback and window management on a desktop, and from there I moved on to composing music, entering a pin on a number pad and playing multiple games, including a platform where my mind control was supplementing my physical input on a USB gamepad to create a whole new level of fun and complex gameplay that wouldn’t be possible otherwise.

This is a Dev Kit, so the included software is just a small sampling of what could be possible with NextMind eventually, now that developers are able to build their own. What’s amazing is that the included samples are breathtaking on their own, providing an overall experience that is mind-bending in all the best possible ways. Imagining a future where NextMind hardware is even smaller and a seamless part of an overall computing experience that also includes traditional input is tantalizing, indeed.

NextMind’s Dev Kit is definitely just that — a Dev Kit. It’s intended for developers who are going to use it to write their own software that will take advantage of this unique, safe and convenient form of brain-computer interface (BCI). The kit retails for $399, and is now shipping. NextMind has plans to eventually consumerise the product, and to work with other OEMs as well on implementations, but for now, even in this state, it’s an awe-inspiring glimpse into what could well be the next major shift in our daily computing paradigm.