Walmart and TikTok announced this morning they will be partnering on the first pilot test of a new shoppable product experience on TikTok’s social video app. Walmart, as you may recall, had planned to invest in TikTok when the app was being threatened with a ban from the U.S. market unless it sold its U.S. operations to an American company, per a Trump administration executive order — a ban that’s now on pause after multiple legal challenges. Walmart’s interest in TikTok, however, has not waned. The retailer, though seemingly an odd fit for a social network, had seen the potential to attract a younger online consumer through video and, in particular, livestreamed video.

This is what the new test on TikTok will involve, as well.

During a Walmart livestream, TikTok users will be able to shop from Walmart’s fashion items without having to leave the TikTok app, in a pilot of TikTok’s new “shoppable product.” The fashion items themselves will be featured in content from 10 TikTok creators, led by host Michael Le, whose TikTok dances have earned him 43+ million fans. Other creators will be more up-and-coming stars, like Devan Anderson, Taylor Hage and Zahra Hashimee. (Though not pre-announced, Avani, Savannah and Cole LaBrant, Andrea Espada, Whitney Madueke, and Alex Costa joined the event, too.)

All will be participating in a special event hosted on TikTok called the “Holiday Shop-Along Spectacular,” which will take place on Friday, December 18 at 8 PM ET on Walmart’s TikTok profile. 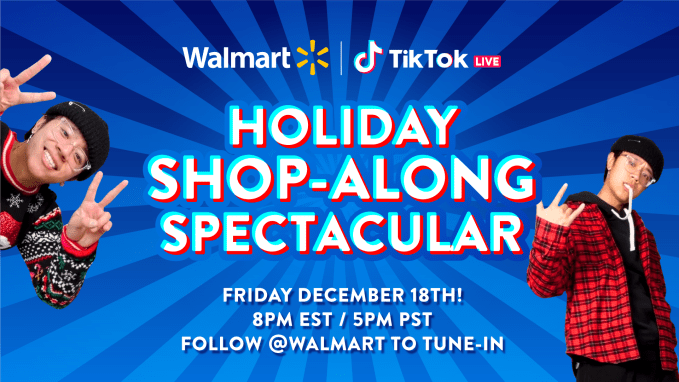 During this special, the creators will show off their favorite Walmart fashion finds in their own unique ways. For some, that will mean giving fans a peek inside their closet. Others may do a living room runway or even a fashionable “dance off,” Walmart says.

There are two ways TikTok users can shop for the fashion items featured.

As products are shown on screen, pins will pop-up that users can tap to add the item to their cart. They’re then directed to a mobile checkout experience. Alternately, customers can choose to tap on a shopping cart pin at the end of the event to look through all the items featured and select what they’d like to purchase.

And for anyone who misses the event, they’ll still be able to shop the items from Walmart’s TikTok profile when the Shop-Along event is over.

“We’re constantly looking for ways to innovate the shopping experience for our customers,” said Walmart’s U.S. Chief Marketing Officer William White in an announcement. “We’re moving faster than ever to find new and improved ways to better serve our customers and meet them where they are. We created this event for, about, and by our community, reflecting the lives, passions and styles of a diverse set of creators so everyone watching will feel represented, no matter who they are or how they outfit their closet,” he added.

Walmart said the idea to partner on mobile shopping didn’t emerge as a result of the recent deal talks, as it’s been an active brand on the platform for over a year. (In fact, it’s even tasked its employees with making TikTok videos, a recent report from ModernRetail detailed.)

The retailer also told TechCrunch there’s not a revenue share with TikTok on the sales it makes through the app, nor any fees, as this is considered a joint test.

This is not TikTok’s first foray into shoppable video.

The company has been exploring this space for some time, including with last year’s launch of the Hashtag Challenge Plus, which added a shoppable component to a hashtag, directing video viewers to shop a site from within TikTok. This year, brands like Levi’s leveraged TikTok’s “Shop Now” buttons that allowed consumers to make purchases through links posted on TikTok. And in a significant deal just this fall, TikTok formally partnered with Shopify on social commerce by allowing Shopify merchants to create, run and optimize their TikTok marketing campaigns directly from the Shopify dashboard.

Livestreamed shopping is also a fast-growing and lucrative market, as younger users are turning to influencers and online video to both be entertained and to shop.

All the major tech companies have invested in this space as well, to varying degrees, including not only Facebook (in an aggressive push across Facebook and Instagram), but also Google through its R&D arm, Amazon through its QVC-like Amazon Live, Alibaba through AliExpress, JD.com, Pinduoduo, WeChat and even TikTok’s Chinese sister app, Douyin.

The trend is also fueling startups, like Bambuser and Popshop Live, which have raised new rounds in 2020 for their own livestreamed shopping products, as well as companies like NTWRK and Packagd, which was acquired by Facebook in 2019.

For TikTok, however, this is more of a natural evolution of its product where influencers are already showing off their favorite items, their fashion and style.

“At TikTok, we’re constantly exploring new ways to inspire creativity, bring joy and add value for our community,” said Blake Chandlee, vice president, Global Business Solutions at TikTok. “Creators and brands have found a creative outlet to connect with audiences through TikTok Live, and we’re excited to further innovate on this interactive experience to enable our community to discover and engage with the brands they love,” he continued.

“Brands have had an incredible impact on the community throughout this year, and we’re thrilled to see Walmart embrace the creativity of TikTok and this first-of-a-kind experience to meaningfully engage with their community,” Chandlee said.