Last month, Twitter announced it would soon begin testing a new social experience on its platforms involving audio-only chat rooms, similar to the sometimes controversial startup Clubhouse. Today, Twitter Spaces, as the product is now being called, is launching into private beta testing. During this time, the product will be limited to select individuals, largely from underrepresented backgrounds, Twitter says.

As the company had explained in November, it would be critical to getting safety right in order for people to feel comfortable in these sorts of spaces. That’s a difficult challenge to overcome — particularly for a company like Twitter, which some have argued has overly favored free speech to limit cries of censorship, even when such speech made some afraid to speak up on the platform’s potential for abuse, bullying and cancel culture.

Though audio-based social networking is still a relatively new concept, in its current iteration of private mobile-social “spaces,” it’s already been proven difficult to moderate.

Clubhouse, though still in invite-only testing phase, has seen several high-profile incidents of moderation failure, including the harassment of a New York Times reporter, and another conversation that delved into anti-Semitism. And it hasn’t publicly launched.

Twitter’s test hopes to discover where issues impacting user safety and comfort can be addressed.

The test will run on iOS during the beta, offering the opportunity for users to participate in host-moderated audio conversations between two or more people. 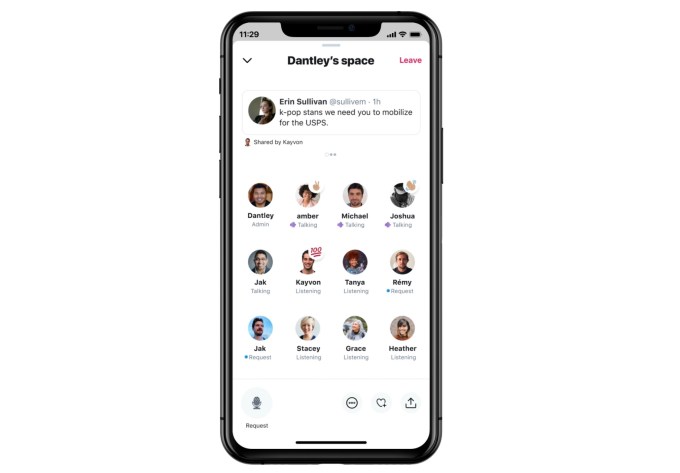 There are two ways to create a Space, Twitter says. You can either press and hold the compose button in the lower right corner of the screen, or you can create a Space through the Fleet creation screen by swiping right.

Hosts on Spaces will also be able to invite people to join a Space through DMs, by tweeting links, or by sharing a link elsewhere. As the test rolls out, everyone can see and join Spaces when they’re invited to do so, but hosts will control who’s speaking. Soon, hosts will also have more options to control conversations.

aye we’re live! what up y’all, we're the team behind Spaces––a small experiment focused on the intimacy of the human voice🧵

The test additionally adds new reaction emojis — the 100, raised hand, fist, peace sign and wave — along with reporting and blocking tools, a “very early version” of automatic transcriptions, and the ability to share tweets into a Space. Many of these features were already spotted last month by eagle-eyed reverse engineer Jane Manchun Wong. But today, Twitter is confirming they will be part of the beta test at launch.

Twitter says the beta test will involved around a couple hundred people and will roll out over the course of the coming weeks on iOS.