Mike Folgner has had his share of success building video editing tools, having sold Jumpcut.com to Yahoo and SnappyTV to Twitter. But as he explained in a new Medium post, he still sees “unfinished business” in the video industry.

“Today, most major productivity software categories have made the leap from desktop software to the web,” Folgner wrote. “Despite significant progress in web technology, professional video tools have not made this leap. With WebGL, WASM, and other advancements this will change. We can now build performant, feature rich applications integrated with the fabric of the web.”

To create full-featured video editing software that works in the browser, Folgner has teamed up with Ryan Cunningham (his Jumpcut and SnappyTV co-founder), Ashot Petrosian (who was a lead engineer at Jumpcut) and Chris Martin to found a new startup called Tensil, which is currently taking signups for anyone who wants to test the alpha version of its first product Scenery. 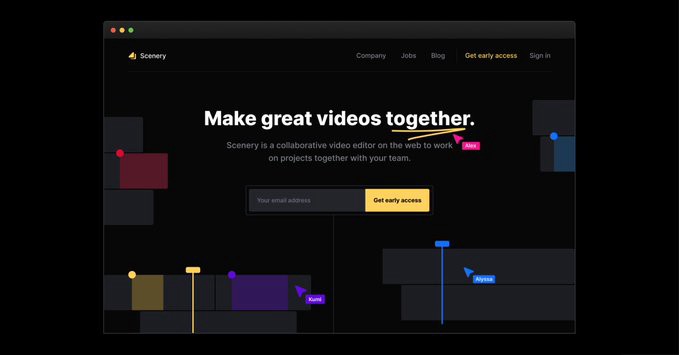 Since they’re still developing and testing the product, I didn’t get a chance to try Scenery for myself, but I got on a call with Folgner and Petrosian to discuss their plans.

“If you stop and think about what should a video editor be today, you won’t build the same tool that was built in the 1970s,” Petrosian told me.

For example, he said that rather than relying on the standard timeline view of existing video editors, Scenery will present a two-dimensional canvas, allowing editors to think “more like a graphic designer.”

Folgner added that by moving the process into the browser, Scenery can help non-editors get involved in the process, similar to the way that Figma brought new team members into the design process.

“We are really excited about rethinking video editing as a team sport,” he said.