Now more than ever both the importance and limitations of the global delivery infrastructure are on full display. But while Amazon and others try to speed up last-mile delivery using drones, Dash Systems hopes to expedite the middle mile — with military-inspired airdrops putting pallets of parcels down at their penultimate destinations, even in the most inaccessible of locations.

Air-based delivery generally consists of four steps. First, an item is taken from the warehouse to the airport. Second, it goes by well-packed large cargo planes from there to another major hub, say from New York to Los Angeles. Third, a truck or smaller plane takes these to their regional destination, a sorting or distribution facility. Fourth, they go out on the familiar delivery trucks and end up on your doorstep.

It’s that third step that Joel Ifill, founder and CEO of Dash, felt could be improved. With an engineering background and experience building guided bombs for the military, he felt that there was an opportunity to apply some of the military’s point-to-point approach to the commercial sector. Why do you need to land at all?

“We should be able to do one-day deliveries anywhere in the world,” he told TechCrunch. “And when I say anywhere, I mean like the tip of Alaska. We’re already using airplanes, why do we have to have a billion-dollar airport to get it there?”

The problem, he said, is that the military-style of delivery (for airdrops, anyway, not smart bombs) isn’t particularly precise: “Great for storming the coast of Normandy, but not for landing in the parking lot of a post office. We thought we could engineer a solution that was both precise and useful on a commercial basis.”

What they came up with is perhaps best thought of as skydiving packages that can be dropped at multiple destinations in a single flight. “We call them pods,” Ifill said. “They have control surfaces and a tail kit, and then a method of slowing down and landing. It’s a turnkey solution you can load in the back of any plane.”

Each pod can handle about 50 pounds of payload right now, which isn’t very much in the cargo world, but of course there can be as many of them as you want loaded in there.

But the pods are only part of the equation. The company is taking over a whole segment, and that means telling the pilot exactly where to go. The team focused on making it as simple as possible so very little training was required — all the pilot needs to do is get to the coordinates indicated by the system. And because there’s no need to land, the plane can deliver pods over a huge range. The Dash system calculates the best route and the pods, upon being released at their appointed coordinates, will get themselves where they need to go.

The hope is that this will simplify the middle-mile situation where slow ground vehicles or costly, fuel-guzzling aircraft are the only options. My concern that the whole concept sounded a bit expensive was met with understanding from Ifill and Bryan Miller, the company’s COO and chief pilot, who also has a a background in military air operations and engineering.

“Air cargo isn’t an intuitively understandable space,” Ifill admitted. “It accounts for less than half a percent of shipped weight, but a third of shipping income. Its primary value proposition is speed, not efficiency. The average utilization of cargo craft is less than 50%.” 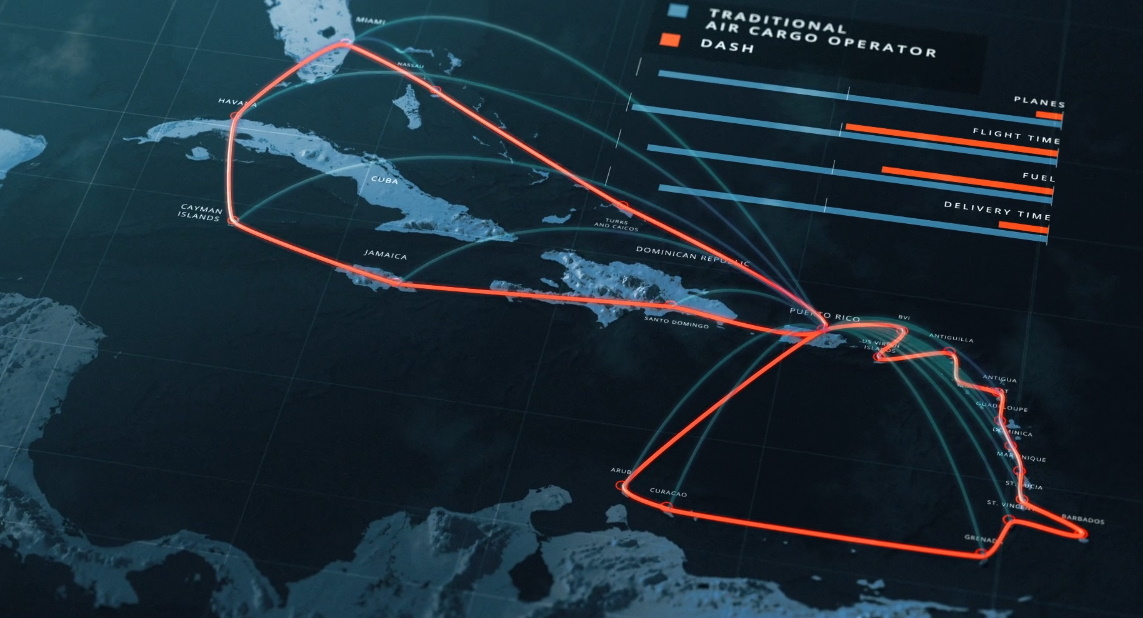 “The rural use case is easy to get,” said Miller, noting the difficulty and delays of delivering to rural communities in Alaska. Getting from the airport in Anchorage to a small post office in the bush is a huge challenge, but if planes could take off from Anchorage and just drop a pallet each on five small airports or helipads, that reduces perhaps dozens of hours of driving — if the roads are even open — to a single flight. And it’s a relatively safe and cheap one at that because you cut down on takeoffs and landings at airports where any number of Alaska’s charms may be in play: fog, ice, moose, wind and all the rest.

But there are lots of other places in the lower 48, Miller noted, that can’t get Amazon’s two-day delivery, for example, because the infrastructure simply isn’t there to complete the four steps listed above in that timeframe. But if the Prime packages went on a plane from SFO that would otherwise be only half full, and get dropped on the roof of a FedEx center on the way to the Petaluma airport, it saves everyone time and money.

Commercial contracts are all well and good, but the idea actually got its start in the aftermath of Hurricane Maria, where in Puerto Rico, Ifill said, people had gone nearly two weeks without any deliveries because the communications infrastructure was so devastated. “We had to hike in with a satellite phone to ask the mayor what they needed,” he said, but actual delivery was a 45-minute flight from San Juan. If commercial air drops had been part of the existing system, it could have made things a lot easier.

So the company will continue pursuing the use case of helping reach destinations rendered temporarily inaccessible by disasters — but the main thing that will make it a successful business is augmenting the existing setup to make remote locations easier to deliver to. Ifill didn’t seem to think that going up against giants like FedEx and UPS was a problem.

“No new delivery lane has ever made an old one go out of business,” he said. This may very well increase their business. “We’re competing against the status quo — we don’t have a patent on gravity or throwing things out of airplanes, but to my knowledge we’re the farthest along.”

“We don’t want to own any aircraft,” said Miller. “We want to collaborate with all the companies already out there.”

Amazingly, the regulatory piece is not a big deal. You would think that dropping heavy items from airplanes near residences would be hard to get a permit for, but it’s actually all included in existing regulations. The pods aren’t considered drones, crucially, so they don’t have to register as such. So far they’ve dropped 5,000 pounds of cargo in their Alaska pilot flights.

The $8 million seed round was led by 8VC, with participation from Tusk Venture Partners, Loup Ventures, Trust Ventures, Perot Jain and MiLA Capital. It should help scale the team, Ifill said, and further develop the deployment and pod tech, which is functional but far from finalized. They already are looking at some commercial and government contracts for their first customers — as you can imagine, despite the military doing this for years, it’s a useful tool to have available to some remote outpost or facility.

You can learn a bit more about Dash in the video below.