Parsec, a startup that’s built streaming technology for both work and play, is announcing that it has raised $25 million in Series B funding.

This brings Parsec’s total funding to $33 million, according to Crunchbase. The round was led by Andreessen Horowitz, with the firm’s general partner Martin Casado joining the board. Previous investors Lerer Hippeau, Makers Fund, NextView Ventures and Notation Capital also participated.

CEO Benjy Boxer told me that since he and CTO Chris Dickson founded the company in 2016, the vision has always been “to make it easier for people to connect to their technology, software and content from anywhere, on any device.”

They started out by helping gamers access their gaming PCs from other devices (the Parsec app is currently available for Windows, Mac, Linux, Android, Raspberry Pi and the web).

“From the beginning, we thought that if we could build something that is great for gaming, it will be great for everything,” Boxer said.

But it was a natural transition to other use cases, since some of the people using Parsec to play games in their free time also turned out to work at TV production companies, video game companies or in other jobs where they need access to high-end workstations. That’s why the company launched Parsec for Teams this year, which offers the same low-latency remote experience, while also adding features like encryption, group permissions and collaboration on the same file. 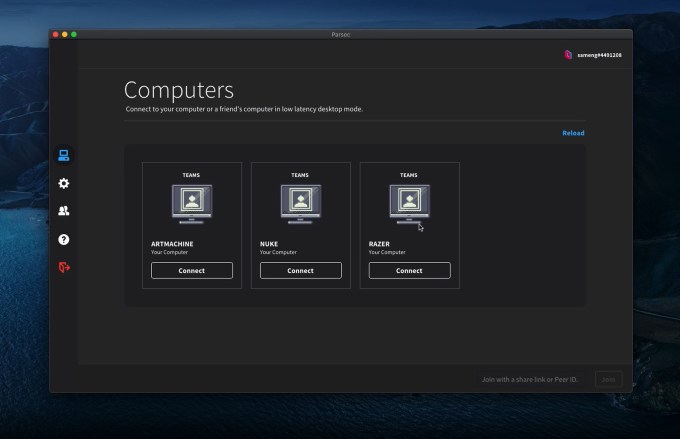 “The performance of Parsec is just way above everything else,” Boxer said. “People forget they’re using Parsec.”

And as you might imagine, the need for something like this has only increased during the pandemic. Boxer said customers have found that the platform is saving their employees more than an hour a day by eliminating the commute and giving them high-speed access to their workstations — rather than, say, having to wait an hour for a 100 gigabyte file to download.

And most of those clients anticipate that after the pandemic, their employees will continue for work from home for part of the time.

“So in that scenario, people are bringing their computers back to the office, and they can use Parsec to make sure it’s always accessible to them,” Boxer said.

Boxer added that the company will continue developing the core platform, leading to improvements for both gaming and enterprise users, while there’s a separate team focused on building administrative and collaborative features.