Over the course of the last year, Adobe has quietly continued to expand its tools for helping developers use PDFs in their applications. In April, the company launched a couple of SDKs, for example, which are now known as the PDF Embed API and PDF Tools API, and with that update, the company also launched its Adobe Document Services platform. The idea here is to provide developers with easy-to-use tools to build PDFs into their applications and workflows. Today, the company is announcing a new partnership with Microsoft that brings Document Services to Power Automate, Microsoft’s low-code workflow automation platform.

“We had this vision about a year and a half back where we said, ‘how about bringing the best of what we provide in our own apps to third-party apps as well?’ ” Vibhor Kapoor, Adobe’s Senior Director of Marketing for Document Services, told me. “That’s kind of the simple mindset where we said: let’s decompose the capabilities of Acrobat as microservices [and] as APIs and give it to developers and publishers because frankly, a PDF for developers and publishers has been a pain for lack of a better word. So we brought these services to life.”

The team worked to make embedding PDFs into web experiences better, for example (and Kapoor frankly noted that previously, the developer experience had always been “very suboptimal” and that the user experience, too, was not always intuitive). Now, with Document Services and the Embed API, it’s just a matter of a few lines of JavaScript to embed a PDF. 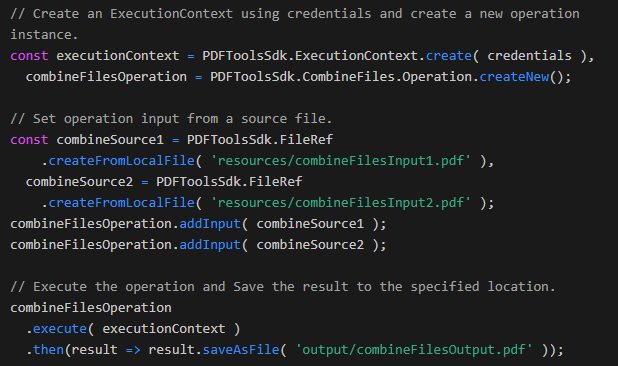 Kapoor acknowledged that exposing these features in SDKs and APIs was a bit of a challenge, simply because the teams didn’t originally have to worry about this use case. But on top of the technical challenges, this was also a question of changing the overall mindset. “We never had a very developer-oriented offering in the past and that means that we need to build a team that understands developers, and figure out how we package these APIs and make them available,” he noted.

The new Power Automate integration brings over 20 new PDF-centric actions from the PDF Tools API to Microsoft’s platform. These will allow users to do things like create PDFs from documents in a OneDrive folder, for example, covert images to PDFs or apply optical character recognition to PDFs.

Since Adobe launched the platforms, about 6,000 developers have now started using it and Kapoor tells me that he is seeing “significant growth” in terms of the number of API calls that are being made. From a business perspective, adding Power Automate will also likely function as a new funnel for getting new developers on board.