Cledara, the SaaS purchase and management platform that helps bring greater viability and control over a company’s sprawling software subscriptions, has raised $3.4 million in additional funding.

The round is led by Nauta Capital, with participation from existing investor Anthemis. It comes off the back of the startup growing revenues by 20x in 2020 — including 7x since August, although Cledara isn’t breaking out specific numbers.

Founded in July 2018 by Cristina Vila after she experienced the SaaS management problem first-hand while working at London fintech Dopay, Cledara has developed software to let companies track and manage their SaaS usage and spending, including analytics to help understand if it is money well-spent. Vila has since been joined by co-founder and COO Brad van Leeuwen, who was previously an executive at banking platform Railsbank, which is also a Cledara customer.

Another Cledara feature is unlimited virtual debit cards to empower employees and outside teams to purchase appropriate SaaS offerings independently. This includes the option for management to approve every purchase before it happens and access real-time updates on what everyone is buying. Part of Cledara’s revenue comes from interchange fees via said card spend, along with employing a SaaS model itself with paid subscriptions.

Counting over 100 customers overall, other businesses using Cledara include Florence.co.uk, Unmind.com and Butternut Box. To that end, Cledara claims its customers reduce software spend by up to 30%, while saving “hours” of manual admin work each month on things like chasing SaaS invoices, bookkeeping and “complying with GDPR and outsourcing regulations for regulated fintech”. 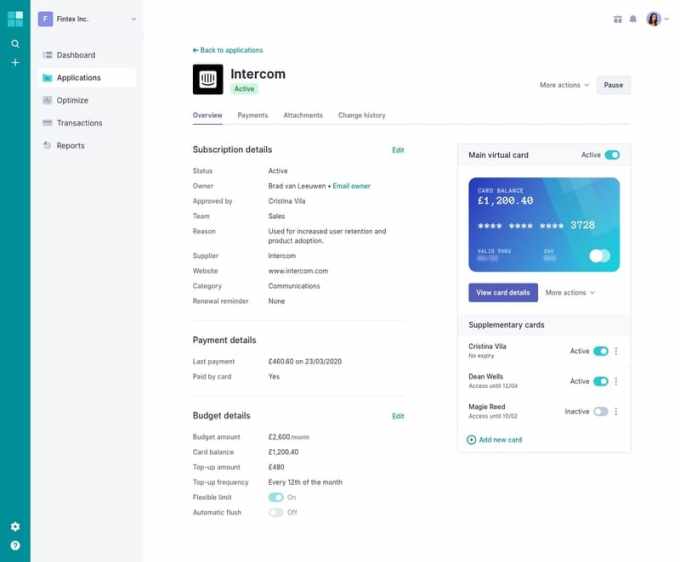 The product is available in over 20 countries across Europe, including the U.K., France, Ireland, Germany and Spain. Meanwhile, Cledara says it will use the new investment to accelerate product growth and for further international expansion, including plans to enter the U.S.

“The continued acceleration of growth means we really need to grow the team: we’ve had to slow down customer on-boarding in the past month because of bottlenecks,” says van Leeuwen. “We will be growing the team 4x before mid next year across all parts of the business — support, success, product, engineering, compliance, marketing and sales. This round brings us the funding to do that, and more”.

More than half of those new hires are likely to be in Barcelona, after Cledara opened a Spain office four months ago to ensure it can continue to access talent outside of the U.K. post-Brexit.