Consumers will have downloaded 130 billion apps in 2020 across iOS and Google Play, up 10% year-over-year, according to mobile data and analytics firm App Annie’s year-end forecast. Consumer spending across the two app stores will also grow by 25% year-over-year to reach $112 billion by year end, the firm also predicts.

Typically, much of the download growth is led by emerging markets, but this year things were different.

Due to the COVID-19 pandemic, mobile adoption accelerated by two to three years. As a result, consumers increasingly turned to apps as digital solutions for work, education, entertainment, shopping and more. This resulted in the rise in downloads, time spent on mobile and consumer spending — despite there being more maturity in the mobile market. 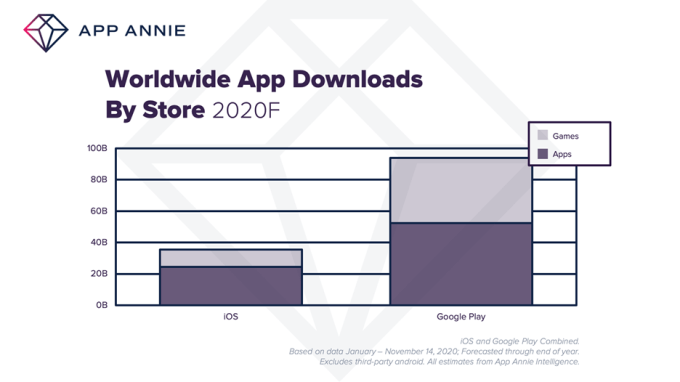 Google Play downloads in 2020 outnumbered iOS downloads by 160%, but both stores saw 10% growth. Games, meanwhile, increased their share of the downloads to 40%. On Google Play, they accounted for 45% of all downloads, up 5% year-over-year, but they maintained a 30% share on iOS. Games additionally accounted for $0.71 of every dollar spent across both app stores.

Also due to COVID-19, consumers spent more time on devices — a metric that saw a significant 25% jump from 2019 to top 3.3 trillion hours on Android. (App Annie cannot measure the figure on iOS.) 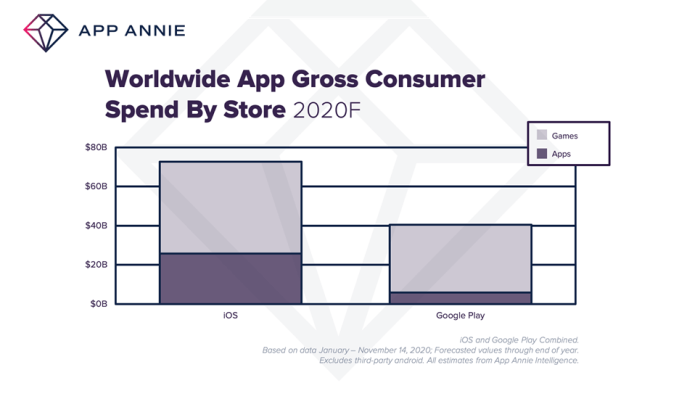 This increased time spent helped contribute to the growth in consumer spending, which hit a new annual record ($112 billion) in 2020. In 2020, 65 cents of every dollar of that spend went to iOS, but spend on Google Play continues to grow. This year, it will reach close to 30%, the firm predicts.

The report also looked at the top apps of the year, which saw TikTok No.1 by downloads and No. 2 by consumer spend, but still beat out by Facebook on monthly active users. Despite a lockdown, dating app Tinder made it to No. 2 in terms of consumer spend.

Other Facebook apps, including Instagram, Messenger and WhatsApp, maintained top positions across download and active users charts. Thanks to COVID, Zoom made it on 2020’s list of top downloads, in the No. 4 position. On iOS, it had been No. 1 by downloads, Apple recently reported, followed by TikTok. Google Meet made a showing as well, at No. 7. 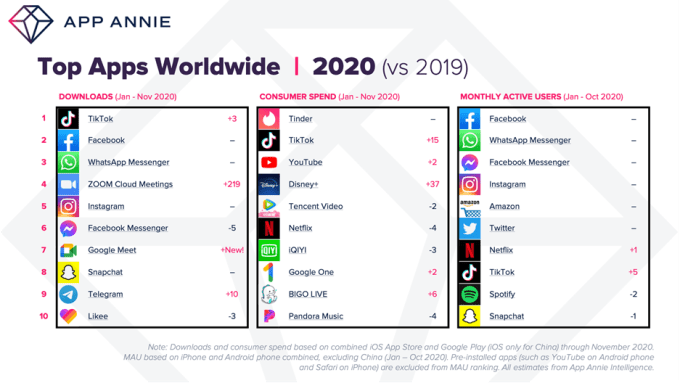 We should note today’s numbers don’t paint a full picture of the mobile market, as they exclude third-party app stores in China. Those figures are wrapped into App Annie’s more extensive “State of Mobile” report that tends to arrive early in the year for the year prior.