Startups that raised earlier in 2020 are finding success again before the year closes.

Today it’s Skyflow, a startup that TechCrunch covered in May when it announced a $7.5 million round. The company disclosed a new investment worth $17.5 million on Tuesday. The new round, a Series A, was led by Canvas Ventures. Foundation Capital, which led the company’s earlier Seed round, also took part in the deal.

Skyflow’s business offers customers the ability to store sensitive data in a zero-trust repository, or vault, that is accessible via an API. The company uses so-called polymorphic encryption to keep customer data secure, and to allow for granular access to data — more here, if you’re up for a white paper on the subject.

At the time of the company’s earlier Seed round, TechCrunch wrote that if its tech works as described, “Skyflow could help a host of companies that either can’t afford, or simply can’t be bothered, to properly protect your data that they have collected.”

It appears that the tech works, as the startup has landed a number of customers in the intervening months. After Skyflow’s product launched in July it secured its first customer in under two weeks, a seven-figure contract, according to co-founder and CEO Anshu Sharma. By the woefully out-of-date rule of thumb that a software startup is ready to raise a Series A once it reaches $1 million in annual recurring revenue (ARR), Skyflow graduated to the next level of startup maturity rapidly. Although that initial contract may have had a longer time-horizon than a single year.

Why does TechCrunch cover so many early-stage funding rounds?

Given that its initial annual contract value (ACV) was attractive, and the company sports eight-figures worth of pipeline today according to its CEO, it’s not a surprise that Skyflow was able to raise more capital.

Canvas Ventures got interested even before that deal landed, pinging the startup about an investment after it announced its Seed round. Paul Hsiao, a general partner at Canvas, reached out and asked the company if it was looking to raise a Series A in June. The company balked at talking on more capital, asking Hsiao for some time to consider despite the offer coming with an attractive valuation (nine-figures, per Sharma).

After closing more customers, the company still had plenty of cash in the bank, but started talking to investors about taking on more capital anyway (always raise when you don’t need to is old venture advice for a reason). Some large funds wanted ownership stakes in the startup that failed to delight its founding team, the CEO said. In the end, the first investor to conviction won out, and Skyflow closed the deal with Canvas.

What’s ahead for Skyflow

The startup is honing its go-to-market motion. Sharma told TechCrunch that Skyflow has built out variations of its product to target market segments like finance, healthcare, and identity, areas that are rife with regulation and sensitive data. For Skyflow, the inherent radioactivity of those datasets is what is was built to manage, so it’s not afraid to wade in.

Skyflow is staffing up as well, especially to handle larger customers that require a sales force. A release from the company that TechCrunch viewed before publication added that Skyflow intends to hire more engineers, and continue its work more on offering vertical-specific product variants. 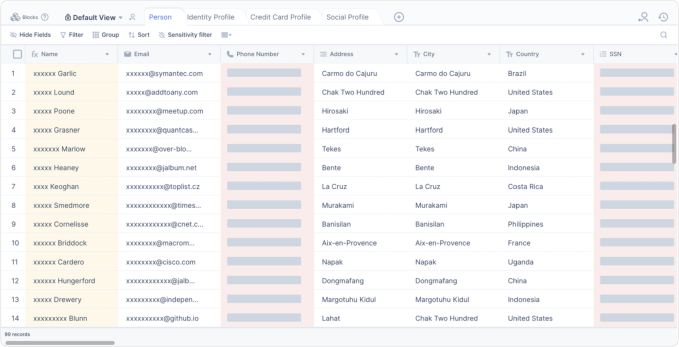 Sample product view, via the company.

The startup also made a few key hires in recent months, including Paul Kopacki the former CMO of Heroku who joined recently, and Karthik Rajan, a former Salesforce engineering VP.

With good initial traction and more capital, Skyflow is in a good spot. Now it simply needs to keep the growth coming, and all the data it is securing safe. We’ll bother the company for new growth metrics when it’s been selling for a full year.