Nielsen is updating its TV ratings to reflect a world which audiences are watching TV both live and on-demand, across a variety of different streaming services and devices.

While the firm has long provided the standard measure for TV audiences, things are more fragmented when it comes to digital viewing. So the upcoming Nielsen One platform isn’t just another digital measurement product — it’s an update to Nielsen’s core metrics.

“Our main objective is, we want measurement to be no longer be a barrier to cross-media [ad] buying,” said Scott Brown, Nielsen’s general manager of audience measurement.

So when Nielsen One launches in fall 2022, the numbers that Nielsen reports about a TV program’s viewership should reflect the true size of the audience, not just the number of people watching on traditionally.

And given the online world’s programmatic ad-buying, as well as similar tools beginning to expand into linear traditional TV, Brown said it’s also time to abandon the idea that “everybody sees the same ads.”

That means the platform will be “moving away from” Nielsen’s C3 and C7 ratings, which are supposed to measure how many people saw a TV program’s ads within three and seven days of airing, respectively. Brown said Nielsen One will be much more granular, measuring how many people saw each ad across different platforms: “Each individual advertisement will get an audience estimate number,” with the goal of fully abandoning the older metrics by fall 2024. 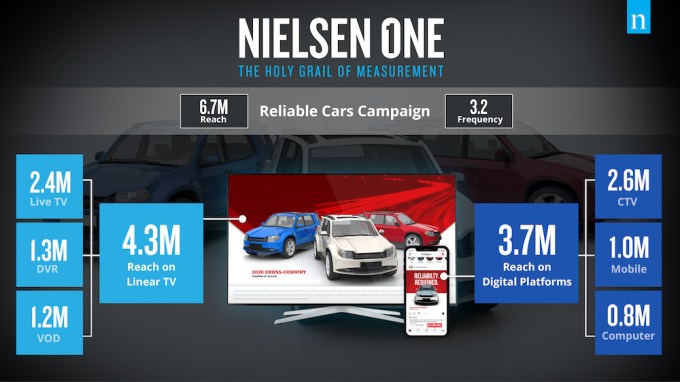 The Nielsen One launch will also include what Brown called a “new data backbone,” allowing the firm’s clients to get more direct access to the data that Nielsen uses to report these numbers.

To offer this data, Nielsen will continue relying on the panels that it uses to create its existing TV ratings, except Brown said the data will now be “truly cross-platform.” The firm will be drawing additional data from its partners, who already include Amazon, Hulu, Roku, Vizio and Google/YouTube.

Brown suggested that with many networks and media companies launching or acquiring streaming services of their own, all of them should want to work with Nielsen to validate their viewership and ads — though some, like Netflix and Disney+, have less of an incentive since their business models rely on subscriptions, not ads.

“Everyone will be measured,” he said. “The ones that lean in and do an integration with us will get more granular measurement and more comprehensive coverage.”

I also brought up one of the big debates in the online world: With Facebook counting three seconds of viewing time as a video play, while Netflix focuses on viewers who “chose to watch” at least two minutes of a show, what actually constitutes an impression?

“We don’t have a final answer in terms of, this is what we’re rolling out,” Brown said. Instead, Nielsen plans to create a working group to hash this out next year. And in the meantime, it’s building technology that will “measure on a second-by-second level of granularity,” allowing the platform to support whatever the final rule might be.

Nielsen is revamping the way it measures digital audiences