Practically speaking, it’s nearly impossible to offer a real review of “Cyberpunk 2077,” the long-awaited follow-up to “The Witcher 3” from developer CD Projekt Red. In the first place, it’s so big that the few days I’ve had with it aren’t enough to realistically evaluate the game; second, it’s so buggy and janky now that it feels wrong to review it before it becomes the game I know it will be; and finally, everyone’s going to buy it anyway.

The Witcher 3 is among the most universally lauded games of the last decade, up there with “Breath of the Wild,” “The Last of Us” and “Dark Souls.” Though it had its flaws — lackluster combat, a limited scope — it did the open world thing better than anyone before or since, largely through improved writing, interesting characters and consequences to player choices.

It was during what you might call that game’s honeymoon period that “Cyberpunk 2077” began to emerge more publicly (it had been announced years prior but without much to go on), and in the years since then the game has approached untenable levels of hype: It could never live up to what people expected, but it could very feasibly be a good game in its own right.

Recent controversies, however, have cast a pall over the launch: A seemingly hypocritical condemnation of pre-release crunch from the developer, some indefensible choices regarding diversity in the game (racialized gangs and a questionable approach to gender and trans representation) and delays suggested this may not be the magnum opus people hoped for. 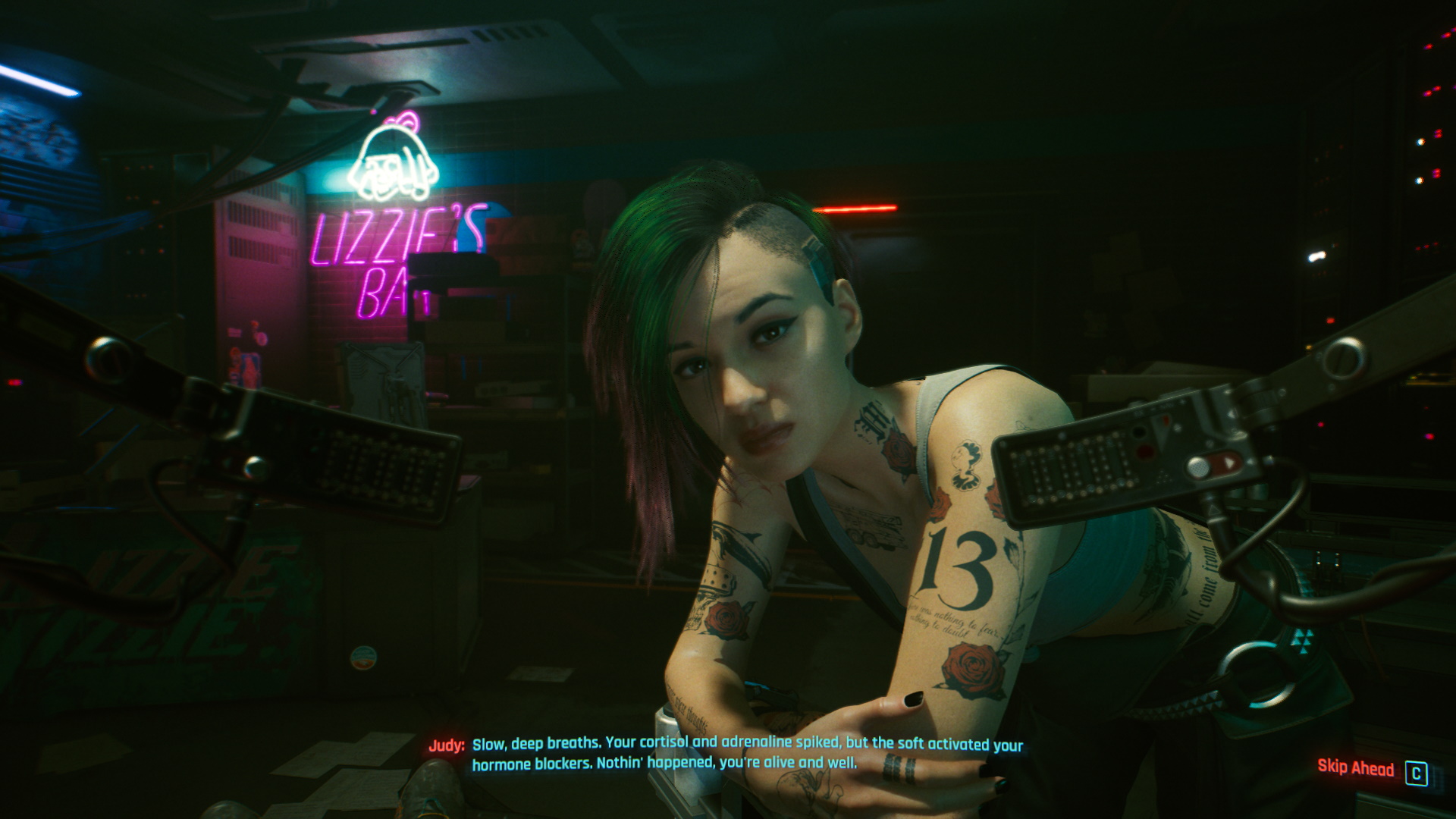 In the first place I can confirm that the game probably should have been given a few more months of polish, at least on PC, the platform on which I played it. From the very start I encountered obvious bugs like characters failing to animate, objects floating in mid-air and the admittedly expected physics silliness one finds in every open-world game with simulated objects interacting. A day-one patch may fix some of them, but it’s clear that a game this big is nearly impossible to smooth out entirely. (I should say that I’m only partway through the 40-odd-hour campaign, though like its predecessor that will be padded out considerably with side quests.)

That’s a shame, because the world CD Projekt Red has created — or rather adapted from the tabletop RPG on which it is based — is undeniably rich and lovingly fashioned. The easiest way to describe it is simply to say that it’s exactly what you imagine when you think of “cyberpunk,” no more, but surely no less.

The look of overcrowded streets filled with weirdo future people, shuffling between food carts offering vat-grown meat, beneath floating neon advertisements for cybernetic limbs and hacking tools, all watched over by enormous corporations of dubious intention… it’s right out of Blade Runner, Johnny Mnemonic, Strange Days, Ghost in the Shell, Neuromancer and dozens of other genre pieces that informed both the original RPG and the general ideas that constitute “cyberpunk” in the zeitgeist.

It’s a familiar world you’ll be entering in some ways, with few real surprises if you’re at all conversant in the genre. That is a good thing in many ways, as it feels like a lived-in place: a crystallization and expansion of ideas that, while you have seen them elsewhere, have never been at your fingertips so readily, save perhaps in the original “Deus Ex,” which had its own limitations. 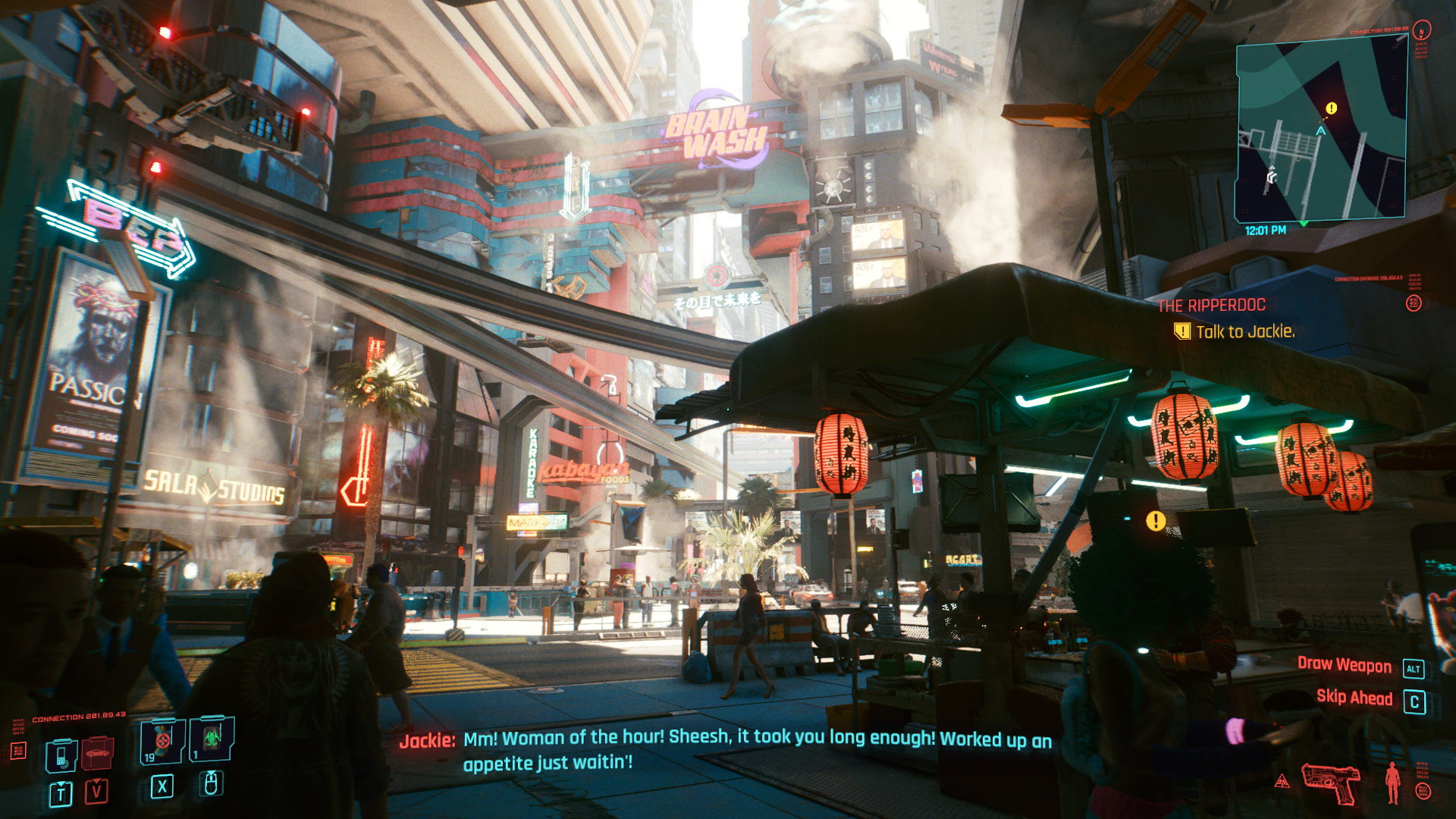 Yet at the same time there is very much the feel of a lack of imagination and willingness to update those ideas in ways that seem obvious. The gangs based on racial identities seem like such a poor fit for both this era and for a future in which such distinctions have no doubt declined in relevance, especially in a vast melting pot like Night City. The stereotypical “Mexican tough guy” dialogue of your otherwise likeable companion Jackie grates, for instance, as do for example the stilted, supposedly Japanese mannerisms of staff at an Arasaka corporate hotel.

Gender is also a mixed bag. Reviews by queer-identifying reviewers at Polygon and Kotaku have much more relevance here than anything I can say, but I can only concur that the freedom the player has in selecting their presentation is an important step toward better representation of queerness in games — but also has a “do as I say, not as I do” feeling. Elsewhere in the game sex and gender are handled regressively or inconsistently with the clear implication that, with body modification something anyone one can do on a street corner for a few eurobucks, race and gender are fluid and unimportant in this world.

This future feels like it was extrapolated exclusively from the forward-thinking but still limited minds of a bunch of smart white guys from the ’90s. Perhaps that’s why I feel so comfortable in it. But as “Ready Player One” demonstrated, there’s a limit to how much can be accomplished by those methods.

At the same time I want to call out the care that was obviously taken in some ways to have a future filled with people of different shapes, sizes, colors, inclinations and everything else — it’s clear there is genuine good intention here, even if it stumbles with unfortunate regularity. 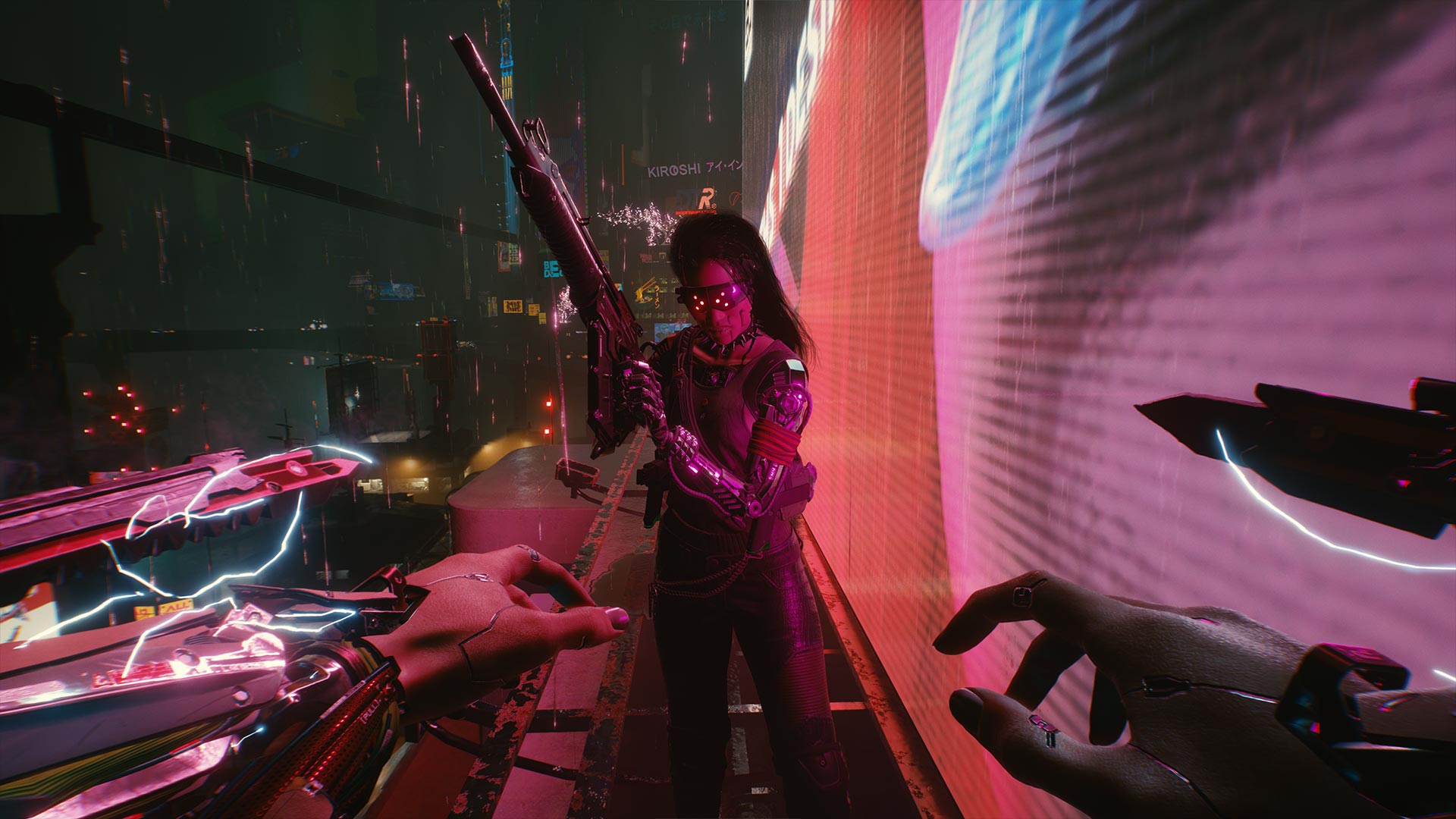 Yes, it’s good, but difficult to categorize. On one hand, you have a paralysis-inducing freedom in shaping the capabilities with which your character approaches the various situations he or she will encounter. Brute force, stealth, hacking, gunplay — all are quite viable, but don’t expect to get far relying on only one. A “pure hacking” approach, for instance, will be far more tedious than it’s worth, while a “pure gunplay” one will likewise miss the point.

In navigating an enemy base, taking down some rando street gang, or getting through one of the game’s highly involved criminal operations, there are many options for any given situation, but none is reliable enough (certainly not early on, anyway) to get you through without resorting to the others.

One inconveniently placed guard may be susceptible to having his eyes hacked, while another may be easily distracted by one of the numerous items you can make fizzle out and attract their attention. But when you eventually slip up and the bullets start to fly, you’re not going to hack your way out of it. That’s okay, though: You’re not a scalpel, you’re a Swiss Army knife. Act like it! 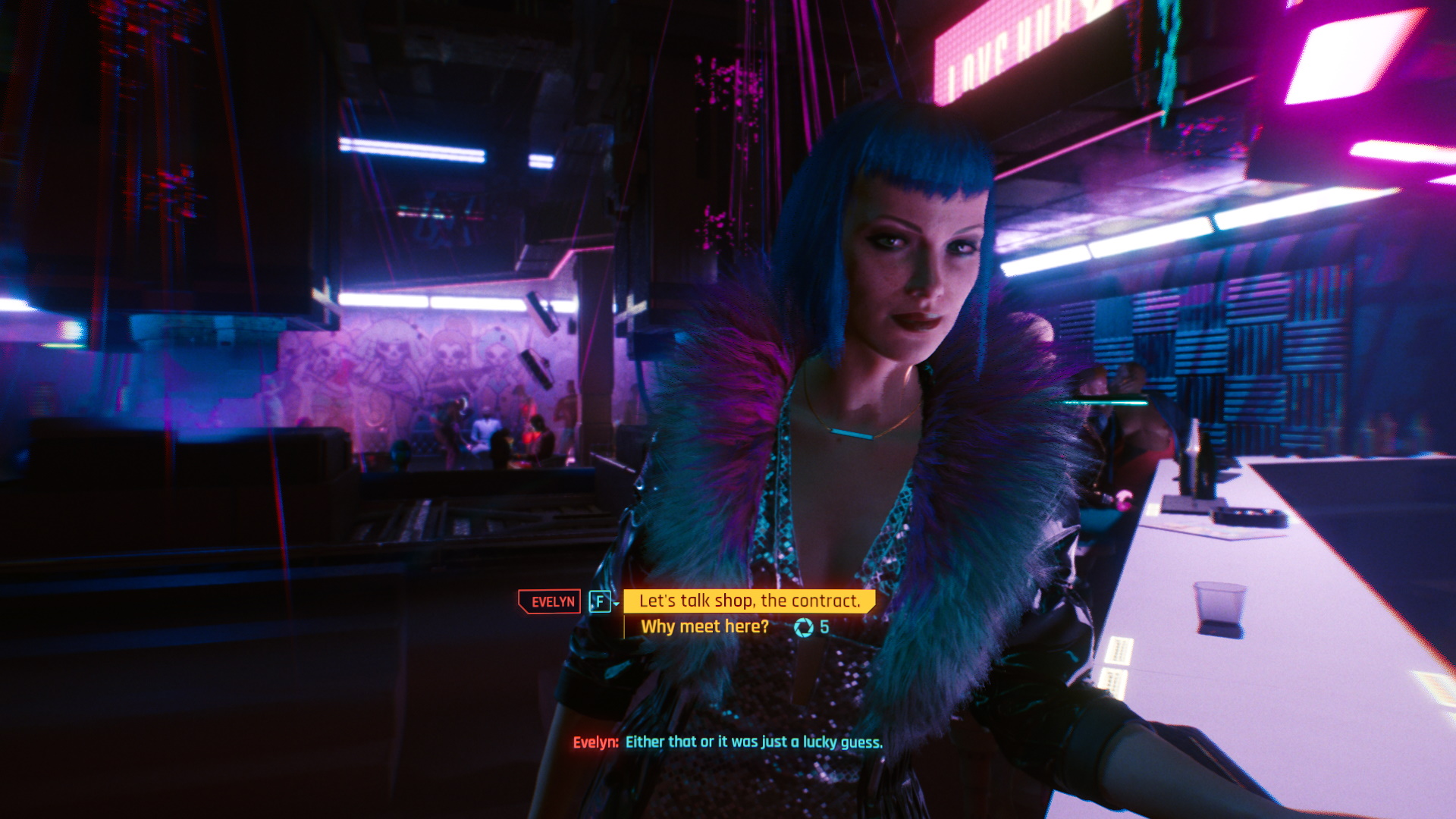 The open world in which you’ll be undertaking all these missions is a rich one… perhaps too rich. Open the map and you’re presented with a sea of icons, though they’re not quite the Ubisoft-style to-do list so much as letting you know that this is a big, dense city where you’ll never lack for gun shops, criminal activities to engage in or disrupt and interesting locations to explore. If you think of the map as more “where’s a ripper around here? Let me check my phone” than generic “video game map” it makes more sense, though it’s obviously the latter, as well.

You’ll be driving around a lot as well, a process that is about as smooth as it was in “Grand Theft Auto 3.” Using the totally inadequate keyboard controls for my car, I’ve caused panics and accidents, mowed people down and obstructed traffic constantly, while attempting to follow every law and attract as little attention as possible. This part of the game feels hilariously last-generation, like how in “Assassin’s Creed: Odyssey,” your all-terrain horse vehicle was an object of terror and lethality to any peasant stupid enough to walk on one of that game’s many mountain trails.

The helpful GPS directions once took me through a pedestrian-occupied area with a gate that was just narrow enough to completely trap the car, though it extricated itself offscreen when I called it. Another time I summoned the car to my location and instantly heard a distant explosion and screams. The car arrived 30 seconds later completely trashed, missing the doors on one side. Fortunately it seems to repair itself by mysterious means when you’re not looking. 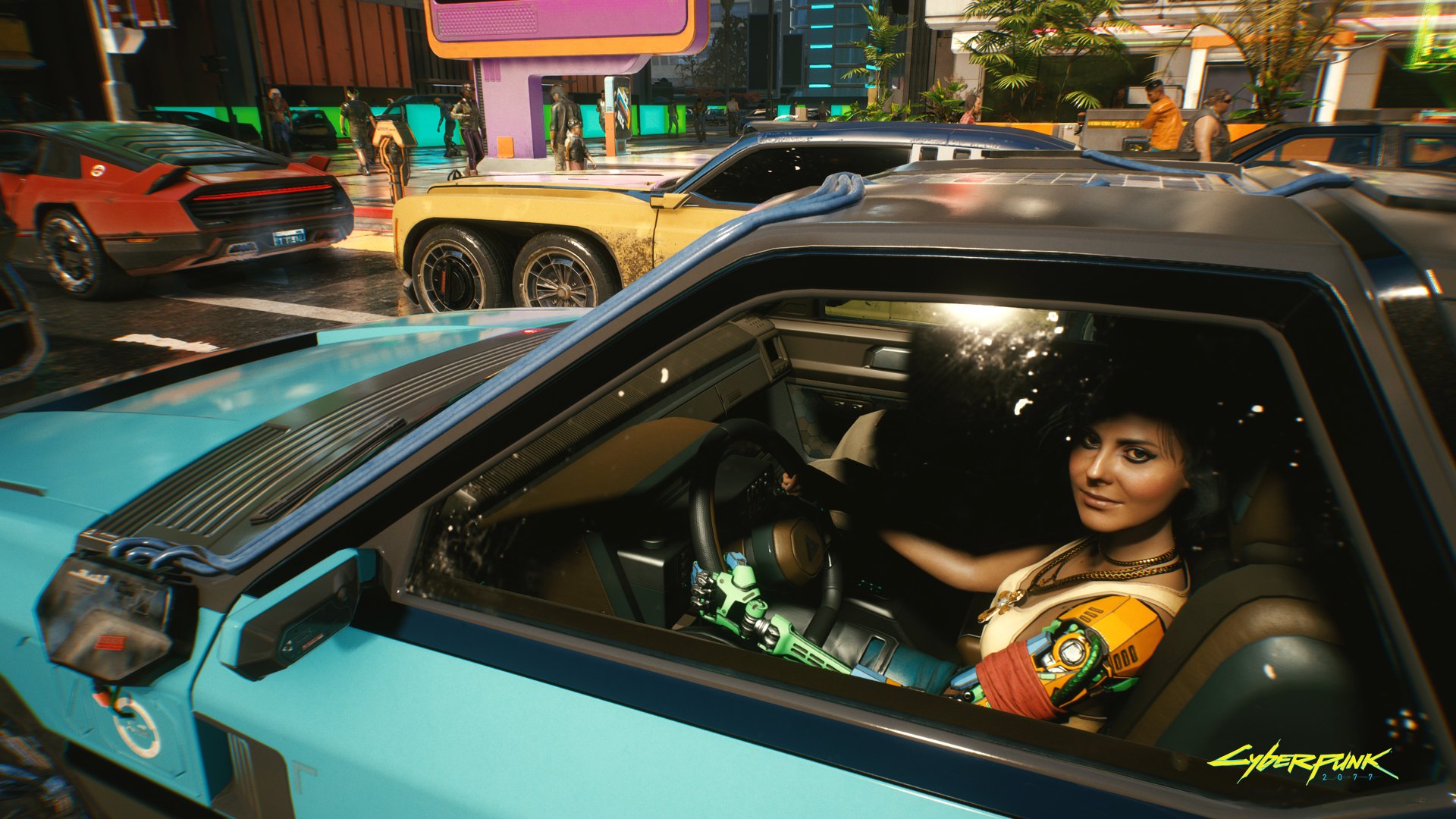 But when you’re doing what you’re supposed to be doing — you know, cyberpunk stuff — things are smoother, if not what I’d call completely modern. I had this feeling the whole time like I was playing a game whose bones were built eight years ago and then wrapped in layer after layer of stuff, creating systems and environments that feel incredibly cool in some ways and, like the car, huge throwbacks in others. The gunplay isn’t as good as any shooter today, the melee is about at “Skyrim” quality, the hacking is perhaps “Deus Ex” levels and stealth is nowhere near “Metal Gear” — but none of those games actually offered the breadth or richness of systems and environments as “Cyberpunk 2077.”

In the final — for the purpose of this article, which is to say incredibly limited and initial — analysis, it’s both accurate to say that this game is “GTA: Night City 2077” and totally inadequate. It’s both unique and totally derivative, futuristic and regressive, wide-open and painfully restrictive. Like many AAA games these days, “Cyberpunk 2077” contains multitudes, and short of being a total faceplant, which it undeniably isn’t, it has a huge draw and value for the millions of players who want to hoon around a cyberpunk dystopia, hacking and shooting and scheming and getting better armblades, eyeball replacements and future-guns.

I suppose the simplest summary of my review would be that I look forward to playing “Cyberpunk” when it’s finished. “The Witcher 3” came out to acclaim but also criticism of many of its systems, and over time it has evolved into the genre-leading game it is. “Cyberpunk” has that potential, but it undeniably also has real issues that I would like to let them address before I play it. If you have any patience, I’d give it a few months at least so you don’t have the best of the game spoiled by the worst. At some point in the future I think “Cyberpunk” will be a pivotal title in gaming, but not yet — let’s just hope it gets there before 2077.