Google announced this morning Android phones will receive an update this winter that will bring some half-dozen new features to devices, including improvements to apps like Gboard, Google Play Books, Voice Access, Google Maps, Android Auto and Nearby Share. The release is the latest in a series of update bundles that now allow Android devices to receive new features outside of the usual annual update cycle.

The bundles may not deliver Android’s latest flagship features, but they offer steady improvements on a more frequent basis.

One of the more fun bits in the winter update will include a change to “Emoji Kitchen,” the feature in the Gboard keyboard app that lets users combine their favorite emoji to create new ones that can be shared as customized stickers. To date, users have remixed emoji more than 3 billion times since the feature launched earlier this year, Google says. Now, the option is being expanded. Instead of offering hundreds of design combinations, it will offer more than 14,000. You’ll also be able to tap two emoji to see suggested combinations or double tap on one emoji to see other suggestions.

This updated feature had been live in the Gboard beta app, but will now roll out to Android 6.0 and above devices in the weeks ahead.

Google’s Gboard introduces Emoji Kitchen, a tool to mash up emojis to use as stickers

Another update will expand audiobook availability on Google Play Books. Now, Google will auto-generate narrations for books that don’t offer an audio version. The company says it worked with publishers in the U.S. and U.K. to add these auto-narrated books to Google Play Books. The feature is in beta but will roll out to all publishers in early 2021.

An accessibility feature that lets people use and navigate their phone with voice commands, Voice Access, will also be improved. The feature will soon leverage machine learning to understand interface labels on devices. This will allow users to refer to things like the “back” and “more” buttons, and many others by name when they are speaking. (Apple today also announced that iPhones can now automatically recognize and label buttons and UI features for blind users.)

The new version of Voice Access, now in beta, will be available to all devices worldwide running Android 6.0 or higher.

An update for Google Maps will add a new feature to one of people’s most-used apps.

In a new (perhaps Waze-inspired) “Go Tab,” users will be able to more quickly navigate to frequently visited places — like a school or grocery store, for example — with a tap. The app will allow users to see directions, live traffic trends and disruptions on the route, and gives an accurate ETA, without having to type in the actual address. Favorite places — or in the case of public transit users, specific routes — can be pinned in the Go Tab for easy access. Transit users will be able to see things like accurate departure and arrival times, alerts from the local transit agency, and an up-to-date ETA. 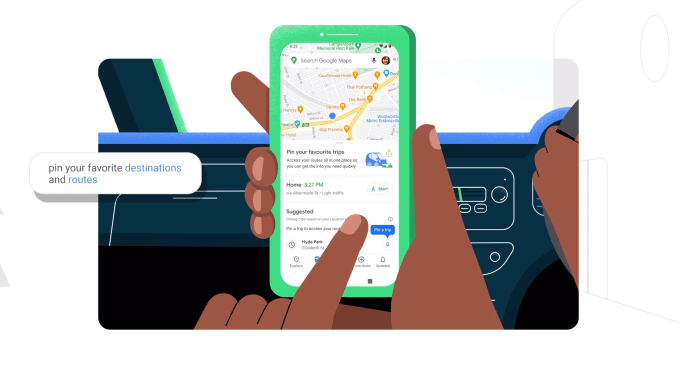 One potentially helpful use case for this new feature would be to pin both a transit route and driving route to the same destination, then compare their respective ETAs to pick the faster option.

This feature is coming to both Google Maps on Android as well as iOS in the weeks ahead.

Android Auto will expand to more countries over the next few months. Google initially said it would reach 36 countries, but then updated the announcement language as the timing of the rollout was pushed back. The company now isn’t saying how many countries will gain access in the months to follow or which ones, so you’ll need stay tuned for news on that front. 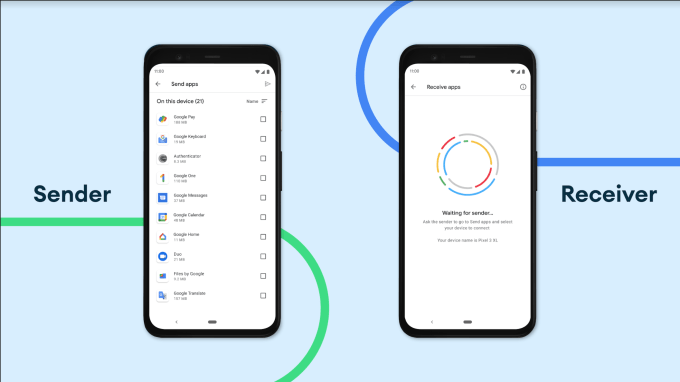 The final change is to Nearby Share, the proximity-based sharing feature that lets users share things like links, files, photos and and more even when they don’t have a cellular or Wi-Fi connection available. The feature, which is largely designed with emerging markets in mind, will now allow users to share apps from Google Play with people around them.

To do so, you’ll access a new “Share Apps” menu in “Manage Apps & Games” in the Google Play app. This feature will roll out in the weeks ahead.

Some of these features will begin rolling out today, so you may receive them earlier than a time frame of several “weeks,” but the progress of each update will vary.