Given the attention that TechCrunch pays to Y Combinator’s Demo Days, we also try to keep tabs on the same startups as they scale and raise more capital. Yesterday we covered YC Winter 2020 participant BuildBuddy, for example. Today we’re taking a look at Heru, a startup based in Mexico City that is announcing a $1.7 million raise after taking part in YC’s Summer 2019 session.

The pre-seed round was led by Mountain Nazca, and participated in by Magma Partners, Xtraordinary Venture Partners, Flourish Ventures, YC itself and a handful of angels. The investment was raised in two pieces: a $500,000 check in February and the other $1.2 million closing a few weeks ago.

Heru wants to provide software-based services for gig workers in Mexico, and eventually other countries. Its founders, Mateo Jaramillo and Stiven Rodríguez Sánchez, are both ex-Uber employees, which is how they wound up in Mexico from their native Colombia.

But Heru didn’t have a straightforward path to existence. The founding duo told TechCrunch their original idea, something similar to OYO, was what they went through Y Combinator and initially raised money for. But after finding OYO already in their target market, the company took three months to rethink and, keeping investors on board, pivoted to Heru.

Heru is a package of software products aimed at delivery drivers and the like, helping provide insurance, credit and tax preparation support. The tax element is key, as the company’s founders explained to TechCrunch that Mexico now expects independent workers to file taxes on a monthly basis. Folks need help with that, so Heru built them a tool to do so.

There’s competition to that element of its product, Heru said, noting that there are accountants in the market that will do the work for $25 to $30. Heru’s tax service, in contrast, costs a smaller $5 each month (100 pesos). Insurance is another $5 each month for accident-related coverage. The startup worked with an insurance provider to build what it describes as a “tailor-made” policy for gig workers who need low-cost coverage. 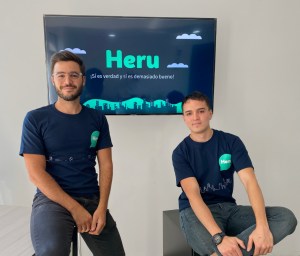 The founding duo, via the company.

Heru is not only targeting Uber drivers and their like, however. The company noted that it also wants to support freelancers more broadly, a population that is much larger than the three million gig workers it counts in the Mexican market.

The company’s app has been soft-launched in the market for a few weeks, with the startup now making more noise about its existence. According to its founders, around 1,200 users were accepted during its test period. Another 20,000 are in line.

Among its early user base, customers are buying on average 1.2 Heru products, a number that I’ll track as the startup scales.

Heru’s app is neat, its market large and the need it is serving material. But in the background of the software story is a brick-and-mortar tale. The startup, in addition to building its app, put together a number of so-called “Heru Casas,” places where gig workers can recharge their phones and use a bathroom. You need the app to enter a Heru Casa, helping the startup find early users.

Currently all Heru Casas are located in Mexico City. The startup is not sure about expanding that part of its efforts to more cities where its app may attract users. Why? It’s hard to scale physical build-outs, it told TechCrunch. Software is much better for quick expansion, and as that’s the name of the startup game, holding off on more physical locations could make good sense until the company can raise more capital.

Heru has big plans to double-down its product work, and eventually add more countries to its roster. The Latin American market is a ripe place for startups to shake things up. Let’s see how quickly Heru can make its mark.