Earlier this month, Twitter announced it would soon begin testing its own Clubhouse rival, called Audio Spaces. The new product will allow Twitter users to gather in dedicated spaces for live conversations with another person or with groups of people. While the company showed off a handful of screenshots of the product at the time of the announcement, there were few specifics about how Audio Spaces would work. Now, we know a bit more about Audio Spaces’ feature set, thanks to some digging by reverse engineer Jane Manchun Wong.

Wong enabled the private beta in the Twitter app and took screenshots that show how Audio Spaces and its features would look in action. Of course, these features could change before the feature later rolls out to the public, but it gives an idea about how Twitter is currently thinking about the product.

– “Who can speak” can be adjusted in the middle

– Spaces can be reported

The images show that users will be able to apply the same sort of conversation controls that are today available for tweets to Audio Spaces, as well. This will allow users to configure their Audio Space to be open to anyone who wants to join, only to people they follow or only to people they specifically invite to join.

Users can invite others to their space in a number of ways, too, including via DM (direct message), by posting a tweet or copying a link that can be shared elsewhere.

When joining a space, people will enter the space with their microphone disabled to limit noise. As the conversation progresses, they can react to what’s being said with a variety of emoji, like the “100,” raised hand, fist, peace sign and waving hand.

In addition, the Audio Space’s creator will be able to adjust who can speak at any time after the dedicated room has been created. From an in-app menu, they’ll be able to manage the speakers, adjust other settings, view the rules, as well as share feedback or report the space, among other things. 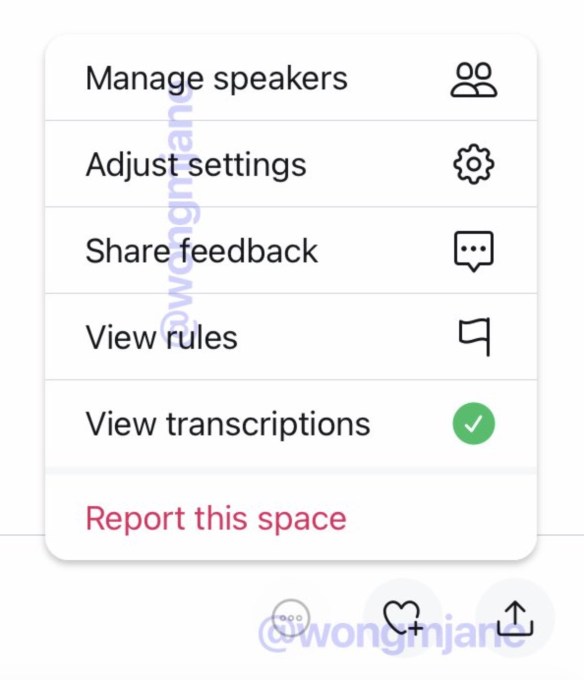 One interesting finding is that Audio Spaces will include transcriptions of the chat, according to this menu. That’s a differentiating feature, compared with some other audio chat room services. While ostensibly a feature designed for accessibility, it could also prove useful in keeping the conversations appropriate and respectful, since users would know their words were being written down.

This could help address one issue with the private chat room model, where live conversations have proven to be hard to moderate. Despite being in an invite-only beta, Clubhouse, for example, already experienced a handful of incidents of moderation failure, including the harassment of a New York Times reporter and another conversation that delved into anti-Semitism.

Twitter, which has struggled for years to combat abuse on its platform, was a questionable place to be testing this unproven new format for online socializing. 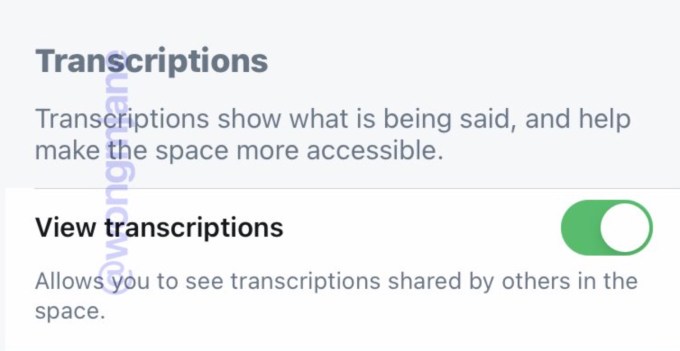 It wasn’t clear how Twitter will approach moderation for these audio chat rooms, but it appears the transcription feature could be a deterrent to toxic speech while the in-app reporting feature allows for a more direct solution to problems that crop up. When users choose the “Report this Space” option, they can then choose to report across a variety of categories, including self-harm, violence, sexual content, child safety, private information or abusive behavior.

Wong also noted Audio Spaces is using Periscope for its back-end, according to her digging in the app’s code. It appears that users have to be connected to Periscope for Spaces to work, she said.

Twitter earlier said Audio Spaces would be launching to a small group of users. During tests, those users would include a group of people who are “disproportionately impacted by abuse and harm on the platform: women and those from marginalized backgrounds,” Twitter Staff Product Designer Maya Gold Patterson had noted, when introducing the feature in a briefing for reporters this month.