A couple of years ago, French President Emmanuel Macron initiated the Tech for Good Summit by inviting 50 tech CEOs to discuss the challenges in the tech industry and make some announcements.

Usually, tech CEOs meet ahead of Viva Technology, a tech event in Paris. This year, Viva Technology had to be canceled, which means that tech CEOs couldn’t get together, take a group photo and say that they want to make the world a better place.

In the meantime, dozens of tech CEOs have chosen to sign a common pledge. Despite the positive impact of some technological breakthroughs, they collectively recognize that everything is not perfect with the tech industry.

“Recognizing that such progress may be hindered by negative externalities, including unfair competition such as abuse of dominant or systemic position, and fragmentation of the internet; that, without appropriate safeguards, technology can also be used to threaten fundamental freedoms and human rights or weaken democracy; that, unless we implement appropriate measures to combat it, some individuals and organizations inevitably use it for criminal purposes, including in the context of conflicts,” the pledge says.

Among other things, companies that sign the pledge agree to cooperate when it comes to fighting toxic content, such as child sexual abuse material and terrorist content. They promise to “responsibly address hate speech, disinformation and opinion manipulation.”

Interestingly, they also agree that they should “contribute fairly to the taxes in countries where [they] operate.” This has been an ongoing issue between the French government and the U.S. government. The OECD and the European Union have also discussed implementing a tax on tech giants so that they report to tax authorities in each country where they operate.

Other commitments mention privacy, social inclusiveness, diversity and equity, fighting all sorts of discriminations and more. As the name suggests, the pledge revolves around using technology for good things.

Now let’s talk about who signed the pledge. There are some well-known names, such as Sundar Pichai from Alphabet (Google), Mark Zuckerberg from Facebook, Brad Smith from Microsoft, Evan Spiegel from Snap and Jack Dorsey, the CEO of Twitter and Square. Other companies include Cisco, Deliveroo, Doctolib, IBM, OpenClassrooms, Uber, etc.

Some nonprofit organizations also signed the pledge, such as the Mozilla Foundation, Simplon, Tech for Good France, etc.

But it’s more interesting to see who’s not on the list. Amazon and Apple have chosen not to sign the pledge. There have been discussions with Apple but the company eventually chose not to participate.

“Amazon didn’t want to sign it and I invite you to ask them directly,” a source close to the French president said. The French government is clearly finger-pointing in Amazon’s case.

This is an odd move as it’s a non-binding pledge. You can say that you want to “contribute fairly to taxes” and then argue that you’re paying everything that you owe — tax optimization is not tax evasion, after all. Worse, you can say that you’re building products with “privacy by design” in mind while you’re actually building entire companies based on personalized ads and micro-targeting.

In other words, the Tech for Good Summit was created for photo opportunities (like the photo from 2018 below). Tech CEOs want to be treated like heads of state, while Macron wants to position himself as a tech-savvy president. It’s a win-win for them, and a waste of time for everyone else.

Some nonprofit organizations and governance groups are actually working hard to build digital commons. But big tech companies are using the same lexicon with these greenwashing-style campaigns.

In 2018, hundreds of organizations signed the Paris Call. In 2019, the biggest social media companies signed the Christchurch Call. And now, we have the Tech for Good Call. Those calls can’t replace proper regulation. 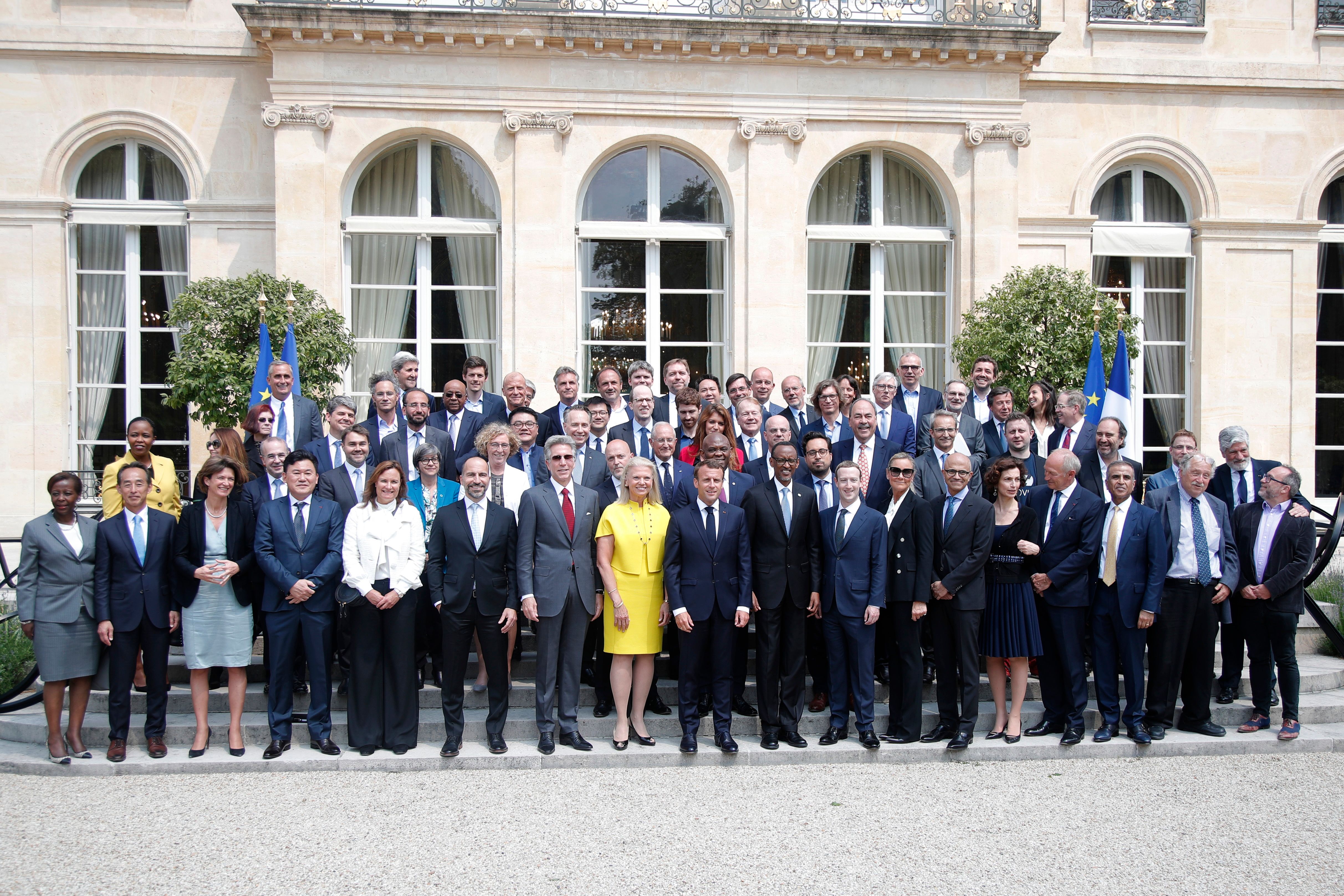