Cure Hydration is announcing that it has raised $2.6 million in seed funding as it brings a healthier approach to the sports beverage market.

Founder and CEO Lauren Picasso, whose past roles include serving as director of marketing at Jet.com, told me that she became interested in the market after training for a triathlon; she’d often feel dehydrated even after drinking lots of water. (This is something I also struggled with while training for a marathon last year — yes, I’m only mentioning this because I really want you to know that I ran a marathon.)

The obvious solution was to drink Gatorade or something similar to replenish her electrolytes, but Picasso said, “When I started looking for electrolyte products that were healthy and effective, I realized everything on the market still uses a base of sugar.” For example, 20 ounces of Gatorade’s Thirst Quencher contains 36 grams of sugar.

So Picasso and the Cure team developed a new beverage based on the World Health Organization’s Oral Rehydration Solution, which Picasso said is “primarily used to help people suffering from diseases like cholera,” and which has saved “millions of lives and is proven to hydrate as effectively as an IV drip.”

Cure uses the ORS as a foundation to create a range of flavored beverages (it’s adding the new flavors Ruby Riot Grapefruit and Laser Focus Matcha). The core ingredients include coconut water and pink Himalayan salt, while everything is organic and vegan, with no added sugars. 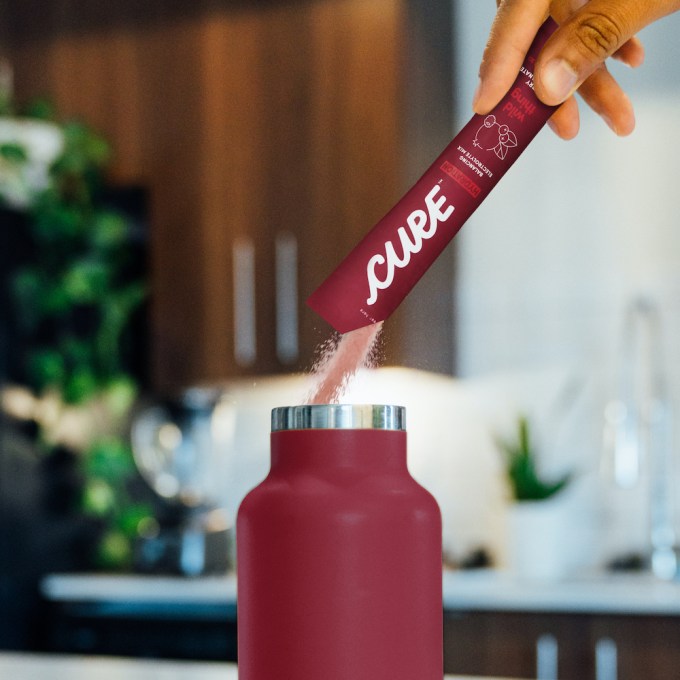 The startup sells these drinks in the form of powders that you mix with water. On its website, they cost $20.99 for a pack of 14, or $16.79 if you subscribe. (The company donates 1% of proceeds to the women’s sports nonprofit SheIS.) Picasso said early customers have tended to be amateur athletes and people who need help staying hydrated due to chronic illnesses and other health conditions.

The product is also available in stores like CVS, Walmart and Whole Foods. Picasso said that one of her goals with the funding is to continue expanding Cure’s retail footprint beyond its current 4,200 locations across the United States.

She also plans to develop new products beyond hydration, though she said they will stay true to the company’s “guiding principles” that all its products are “backed by science” and “taste delicious.” The company has a medical advisory board that includes Dr. Roshini Rajapaksa, a gastroenterologist; Dr. Dana Cohen, the author of “Quench”; and nutritionist Brooke Alpert, author of “The Sugar Detox.”

“Now, more than ever, consumers are prioritizing health in their daily lives and looking for products that are not only effective, but better-for-you,” said Lerer Hippeau principal Caitlin Strandberg in a statement. “Lauren is an exceptional operator and we’ve been impressed with her ability to bring a WHO-approved formulation to market without compromising on product quality or efficacy. With this cash infusion and retail expansion, we’re excited to see Cure get into even more hands.”