Starting a new phone brand in 2018 might seem too late in an already crowded market, but Sky Li was convinced that consumers between 18-25 years old were largely underserved — they needed something that was both affordable and cool.

A few months after Li founded Realme in May that year, the smartphone company organized a product launch at a college campus in India, the world’s second-largest smartphone market. It brought its own production crew, built a makeshift stage and invited local rappers to grace the event.

“I was amazed. No one was sitting down and it felt like a carnival, a big disco party,” Chase Xu, Realme’s 31-year-old chief marketing officer, told me at the firm’s headquarters in Shenzhen.

“No foreign company had ever entered the campus. They didn’t think it was possible. Why would a university let you do a launch event there?” Xu, clad in a minimalist, chic black jacket from a domestic brand, recounted with enthusiasm and pride.

“Realme became widely known thanks to the event. People found it very interesting that it was mixing with students. It didn’t just launch a product. It was showing off a youthful, flamboyant attitude.”

Within nine quarters, Realme has shipped 50 million handsets around the world, with India as its biggest market, even larger than China. The target this year is to double last year’s target to 50 million units, a goal that’s “nearly complete” according to Xu. It’s now the world’s seventh biggest smartphone brand, trailing only after those that have been around for much longer — Samsung, Huawei, Xiaomi, Apple, Oppo and Vivo, according to a Q3 report from research firm Canalys.

Realme didn’t accomplish all that from scratch. It’s yet another smartphone brand rooted in BBK Group, the mystic electronics empire that owns and supports some of the world’s largest phone makers (Vivo, Oppo, OnePlus and now Realme).

In 2018, former Oppo vice president and head of overseas business Sky Li announced he was resigning from Oppo to start Realme as an independent brand, similar to how OnePlus started in 2013. Today, Realme, OnePlus and Oppo all belong to the same holding group. That entity, together with Vivo, sits under BBK, which started out in 1998 selling electronic dictionaries in south China and has been diversifying its portfolio ever since.

While Realme and OnePlus operate independently, they get access to Oppo’s supply chain, a model that has allowed them to have lighter assets and consequently fewer costs. “Realme has an advantage because we share a supply chain with Oppo. We are able to get very good resources from the supply end, stay ahead globally and obtain what we should have,” said Xu.

For instance, the nascent phone maker was among the first to get Qualcomm’s new Snapdragon 865 chips and put four cameras into a handset. Priority isn’t always guaranteed, however, because “there is definitely competition between us and our peers to fight to be the first,” Xu admitted. “Of course, it also depends on the progress of each team’s research and development.”

The light-asset strategy also means Realme is able to offer competitive technologies at relatively low prices. In India, its 8GB RAM, 128GB phone cost less than 1,000 yuan ($152) and its notch screen model was less than 1,500 yuan ($228).

Realme isn’t concerned about increasing margin in the “growth stage,” Xu said, and the firm has “been profitable from the outset.” On the other hand, the phone maker is also introducing a slew of IoT gadgets like smart TVs and earphones, categories with higher markups.

The smartphone-plus-IoT strategy is certainly not unique, as its siblings in the BBK family, as well as Xiaomi and Huawei, have the same vision: smartphones and smart devices from the same brand will form a nicely interconnected ecosystem, driving sales and data collection for each other.

Another way to cut costs, according to Xu, is to avoid extravagant outdoor advertising. The company prefers more subtle, word-of-mouth promotion like working with influencers, throwing campus music festivals and fostering an online fan community. And the strategy seems to be clicking with the young generation who like to interact with the brand they like and even be part of its creative process.

The most enthusiastic users would sometimes message Xu with pencil sketching of what they envisioned Realme’s next products should look like. “They have very interesting and excellent ideas. This is a great generation,” the executive said. 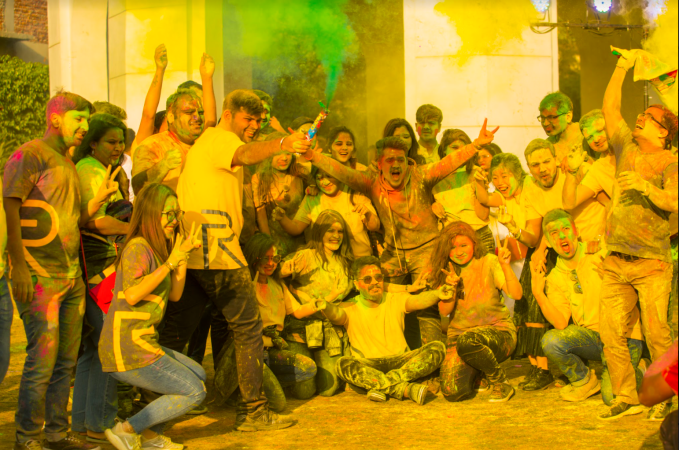 Realme’s India chief executive Madhav Sheth is equally adored by the country’s young consumers. A former distribution partner of Realme, he made an impression on Realme founder Li, who “understands the Indian market very well despite not speaking fluent English,” according to Xu.

“Sheth is very charismatic and good at public speaking. He knows how to excite people.” Xu spoke highly of Sheth, who is an avid Twitter user and has garnered some 280,000 followers since he joined in the spring of 2018.

The Indian boss’s job is getting trickier as India becomes more wary of Chinese influence. In June, the Indian government banned TikTok and dozens of other Chinese apps over potential national security risks, not long after it added more scrutiny on Chinese investments. Anti-China sentiment has also soared as border tensions heightened recently.

Against all odds, Realme is seeing robust growth in India. In Q3, it grew 4% from the previous quarter and currently ranks fourth in India with a 10% market share, according to research firm Counterpoint.

Smartphone shipments rebound to an all-time high in India

“During the start of the quarter, we witnessed some anti-China consumer sentiments impacting sales of brands originating from China. However, these sentiments have subsided as consumers are weighing in different parameters during the purchase as well,” the researcher wrote in the report.

“Of course the India-China conflict is not something we want to see. It’s a problem of international relationships. Realme doesn’t take part in politics,” Xu assured. “There will always be extremist users. What we can do is to expand our fan base, give them what they want, and leave the extremists alone.”

Next year, Realme is looking to ramp up expansion in Europe, Russia and its home market China. None will be a small feat as they are much-coveted markets for all major phone makers.

Part of Realme’s effort to associate itself with what Gen Z around the world considers “cool” is to work with prominent designers. Xu’s eyes lit up, raising his hand in the air as if he was holding a ball. He was mirroring Naoto Fukasawa, the renowned Japanese industrial designer who came up with the onion-inspired color and pattern of the Realme X model.

“The afternoon sunlight slanted through the large windows. [Fukasawa] gave me a playful look, took an onion from beneath the table, and told me that was his inspiration,” Xu recalled. “He slowly turned the onion in the sun. I was dumbfounded. The veins, the pink, gold color, the texture. It was so beautiful. You wouldn’t think it was an onion. You’d think it was craftwork.”