Just in case you hadn’t heard, or are annoyed that folks aren’t writing about it: Bitcoin is rallying, up around 16% in the last week to a value of a little more than $18,000 as of this morning.

Here’s a chart of its recent gains, via YCharts (note, it’s a tiny bit behind, so use the chart as a directional instead of absolute tool): 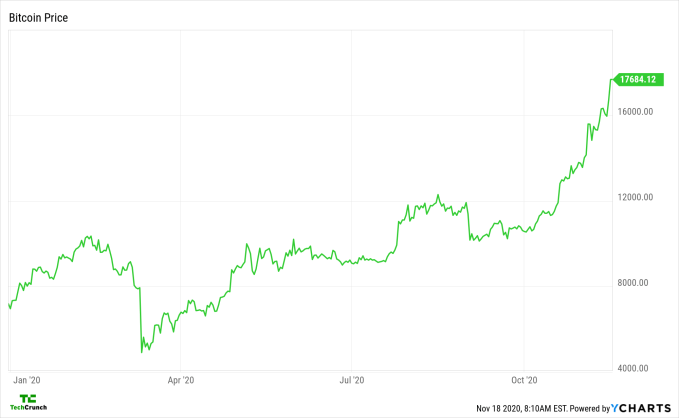 What else is there to say about the rally? We could note that bitcoin miner revenue remains far below its historical peaks, despite some recent gains. We could also point out that the aggregate value of all mined bitcoin in the wild is at an all-time high, per CoinMarketCap data.

The real upshot? Bitcoin is showing it has long-term staying power — even with all its historical volatility.

But not everything is perfect in the world of bitcoin. Looking around the crypto market, the DeFi boom looks mostly based on the Ethereum chain, for example, so bitcoin isn’t catching the same developer-and-demand updraft that the rival cryptocurrency is currently enjoying. And I still don’t know what people are using bitcoin for other than hoping to get rich.

And some are — look at those gains! But not that many. The famous cryptocurrency doesn’t appear to be growing much in terms of unique usage.

Anyway, here’s a post about bitcoin being worth a little more than $18,000. That’s a lot! Well done hodlers.