Twitter’s new Stories feature, “Fleets,” appears to be struggling under the load. Launched this morning to Twitter’s global user base, Fleets appear at the top of the Twitter app, allowing users to post ephemeral content that disappears in 24 hours as well as view stories posted by others. But user demand and curiosity about the new addition seems to be impacting the product’s performance. Many Twitter users are reporting Fleets are lagging and moving slowly. Some even say the feature is crashing their Twitter app.

Twitter acknowledged to TechCrunch it’s aware of the problem impacting some users and says it’s working to fix the issue.

If you’re among those affected, you’ll notice when you’re tapping or swiping to move through Fleets, the screen will either temporarily freeze or move incredibly slowly. This may make it seem like your phone is having problems, but it’s just the Twitter app.

Many users have already taken to Twitter to complain about the issues they’re experiencing. They’re often noting they just got the updated app with the new Fleets feature, but are finding themselves unable to use the product. 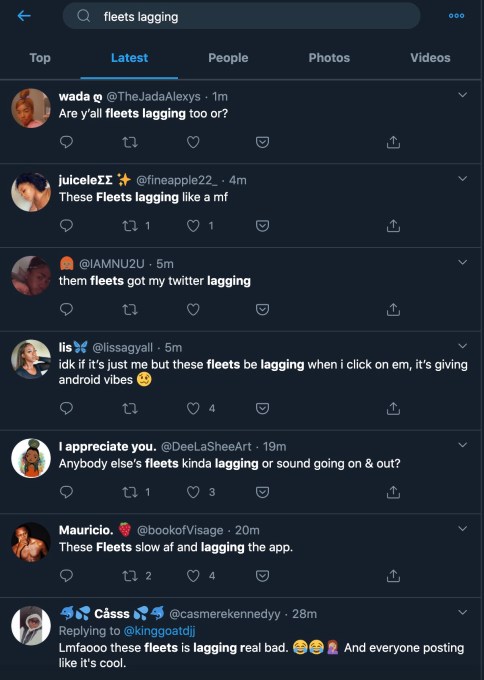 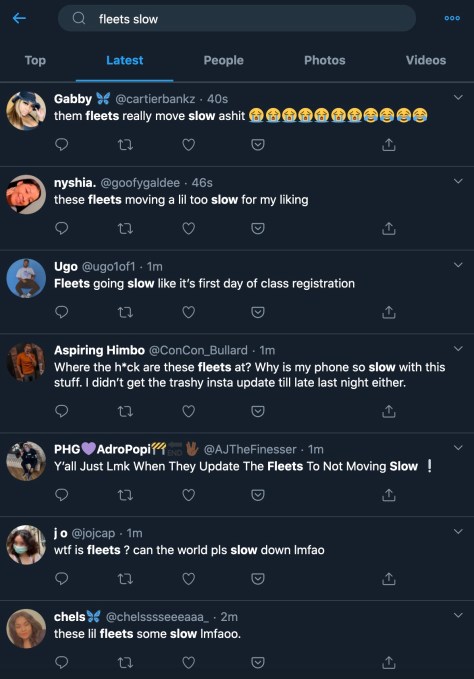 The fact that Twitter is already overwhelmed by user demand for Fleets could perhaps be an early sign of success. If users had no interest at all in Twitter’s version of Stories, they may not have even bothered to update their app to try out Fleets. Or they would have largely ignored the row of stories at the top of their timeline and used the app as usual.

But not only is Fleets crashing, it’s also the No. 1 Trending term on Twitter as of the time of writing, while Snapchat — the originator of the Stories format — is No. 2. Users are comparing Twitter’s Stories to Snapchat in their tweets and, of course, they’re complaining that Twitter built this Stories feature instead of an edit button.

Meanwhile, the word “Stories” itself is the No. 4 Trending term and “App Store” is No. 18. This latter phrase is referenced in several tweets where users are directing others to download the updated version of Twitter from the App Store in order to gain access to the Fleets feature.

It’s been a long time since the Fail Whale days would take down Twitter’s network. In recent years, Twitter has become a remarkably stable app — especially considering the amount of real-time content published to its platform and its use by world leaders. But with Fleets, Twitter again appears to be struggling and it’s unclear how long the product will be impacted.

Twitter hasn’t yet publicly posted to acknowledge that some users are having issues with Fleets or when it expects the product will be stabilized.

Update, 11/18/20: Twitter announced it’s slowing down the rollout to fix the performance issues. According to its replies to users, it may still be a few more days before the feature reaches them due to these stability problems.

We’re slowing down the rollout of Fleets to fix some performance and stability problems. If you don’t have the feature yet, you may not get it for a few more days.

We love that so many people are using Fleets and want to ensure we’re providing the best experience for everyone.

Fleet to the world. Fleets are now available globally on iOS and Android. https://t.co/mvXjbxr15R

Twitter rolls out Stories, aka ‘Fleets,’ to all users; will also test a Clubhouse rival