Let’s get something morbid out of the way right up front: estate planning is a growth business in 2020. Whether you need to create or update a will, build a family trust, or sign over power of attorney for end-of-life decision-making, it’s been a heck of a year for many families, and even more people are starting to think about these instruments if anything worse happens this year (and there are still six weeks left!)

In the United States, the vast majority of this paperwork is conducted in-person and on paper, but COVID-19 has made that challenging. Digitally native startups are coming to the forefront in this market, just as the market is getting white hot.

One of the leaders of this pack is Trust & Will, which we first profiled back in early 2019. Two years ago, the startup had just signed the first electronic will in the United States and had raised a $2 million or so seed round led by Rise of the Rest.

Now, the startup is returning to the capital trough, picking up a $15 million Series B led by Jackson Square Ventures and a bunch of other firms listed below. That brings the company’s total funding to date according to founder and CEO Cody Barbo to more than $23 million.

The company disclosed that it has had 160,000 users sign up for the company’s services since its launch in mid-2018. Trust & Will today has three products: a trust-based estate plan, a will-based estate plan, and “Guardian,” which is a sort of simpler setup for parents with kids. Customers pay an upfront setup fee based on which product they choose, and then they pay a smaller recurring annual subscription fee.

The company, which originally only worked in Nevada due to the state laws around digital wills, now has attorneys who can assist clients in multiple states. The company has also since conducted the first electronic will in Florida’s history, which, let’s just say, is an important center in the estate-planning industry.

A couple of other new changes. First, the startup has built up a number of banking and financial planning relationships with institutions such as Fifth Third Bank (which also joined the Series B round as a strategic investor), AARP, and fintech savings startup Acorns.

Second, the company hired former General Assembly CFO John Zdanowski to take on the startups chief financial officer role. The team has grown to 24, and Barbo noted by email that all three co-founders have become dads since the company’s seed round — putting a bit of a poignant note on their mission to make estate planning accessible to everyone. 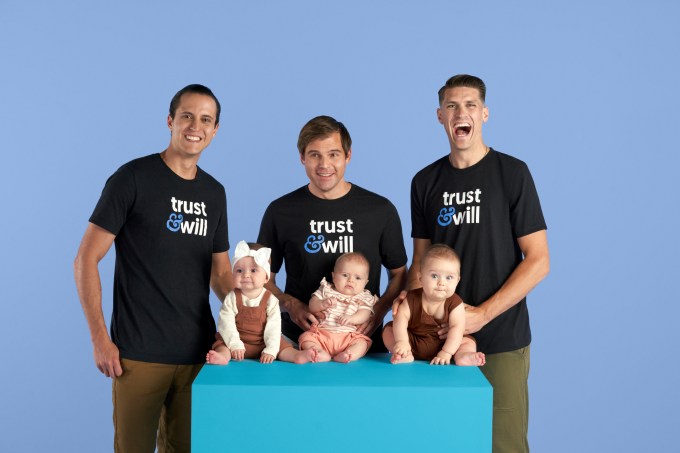 Trust & Will’s three co-founders with their very-well-estate-planned children. Photo via Trust & Will.

Clearly, the company has a great market tailwind going into 2021, and as more states put in place digital wills and estate planning laws, the market is only set to expand in the coming years. A handful of other startups such as Willful and the brilliantly-named FreeWill are also in this market.

Today, the company’s board consists of Victor Echevarria from Jackson Square Ventures, Rob Chaplinsky of Link Ventures (which led the company’s Series A), Jesse Draper of Halogen Ventures, Barbo, and Daniel Goldstein, who is co-founder and COO.