Earlier this year, Mirantis, the company that now owns Docker’s enterprise business, acquired Lens, a desktop application that provides developers with something akin to an IDE for managing their Kubernetes clusters. At the time, Mirantis CEO Adrian Ionel told me that the company wants to offer enterprises the tools to quickly build modern applications. Today, it’s taking another step in that direction with the launch of an extensions API for Lens that will take the tool far beyond its original capabilities.

In addition to this update to Lens, Mirantis also today announced a new open-source project: k0s. The company describes it as “a modern, 100% upstream vanilla Kubernetes distro that is designed and packaged without compromise.”

It’s a single optimized binary without any OS dependencies (besides the kernel). Based on upstream Kubernetes, k0s supports Intel and Arm architectures and can run on any Linux host or Windows Server 2019 worker nodes. Given these requirements, the team argues that k0s should work for virtually any use case, ranging from local development clusters to private data centers, telco clusters and hybrid cloud solutions.

“We wanted to create a modern, robust and versatile base layer for various use cases where Kubernetes is in play. Something that leverages vanilla upstream Kubernetes and is versatile enough to cover use cases ranging from typical cloud based deployments to various edge/IoT type of cases,” said Jussi Nummelin, senior principal engineer at Mirantis and founder of k0s. “Leveraging our previous experiences, we really did not want to start maintaining the setup and packaging for various OS distros. Hence the packaging model of a single binary to allow us to focus more on the core problem rather than different flavors of packaging such as debs, rpms and what-nots.”

Mirantis, of course, has a bit of experience in the distro game. In its earliest iteration, back in 2013, the company offered one of the first major OpenStack distributions, after all. 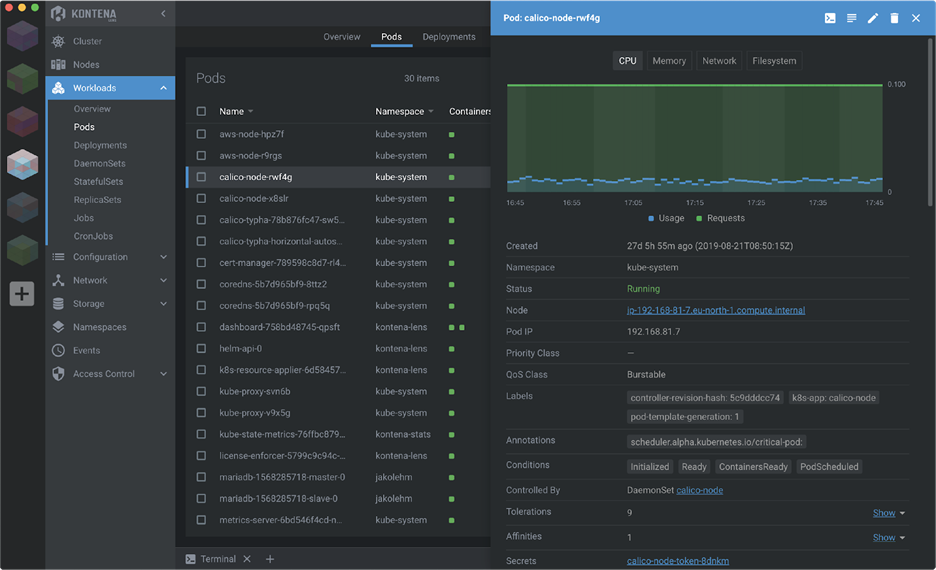 As for Lens, the new API, which will go live next week to coincide with KubeCon, will enable developers to extend the service with support for other Kubernetes-integrated components and services.

“Extensions API will unlock collaboration with technology vendors and transform Lens into a fully featured cloud native development IDE that we can extend and enhance without limits,” said Miska Kaipiainen, the co-founder of the Lens open-source project and senior director of engineering at Mirantis. “If you are a vendor, Lens will provide the best channel to reach tens of thousands of active Kubernetes developers and gain distribution to your technology in a way that did not exist before. At the same time, the users of Lens enjoy quality features, technologies and integrations easier than ever.”

The company has already lined up a number of popular CNCF projects and vendors in the cloud-native ecosystem to build integrations. These include Kubernetes security vendors Aqua and Carbonetes, API gateway maker Ambassador Labs and AIOps company Carbon Relay. Venafi, nCipher, Tigera, Kong and StackRox are also currently working on their extensions.

“Introducing an extensions API to Lens is a game-changer for Kubernetes operators and developers, because it will foster an ecosystem of cloud-native tools that can be used in context with the full power of Kubernetes controls, at the user’s fingertips,” said Viswajith Venugopal, StackRox software engineer and developer of KubeLinter. “We look forward to integrating KubeLinter with Lens for a more seamless user experience.”