It’s hard to think back to the Vision Fund era today, given the oddities that 2020 has brought. But SoftBank’s gravity-bending investment vehicle only stopped investing last September, ending its disbursement of huge blocks of cash from a total committed capital pool worth nearly $99 billion.

The Vision Fund was a wrecking ball, smashing into any company it chose with a big check and demands for rapid growth. By the time it was done investing, the first Vision Fund had deployed around $100 million every day of its existence, according to TechCrunch calculations.

But even before SoftBank and eccentric leader Masayoshi Son were done cutting checks, things were going awry. TechCrunch compiled a list of issues that cropped up inside the portfolio in 2019, including layoffs at the overstuffed Wag, Uber’s lackluster IPO, turmoil at Brandless, the enormous WeWork IPO fiasco and its ensuing chaos, executive changes at Compass, layoffs at Fair and Katerra and OneConnect’s IPO fizzle.

2020 picked up where 2019 had left off, with more issues at OYO, layoffs at Zume Pizza and some public flak for breaking terms sheets.

By this April, SoftBank admitted that it was on track to take stiff losses from its Vision Fund portfolio, which, when combined with other investing losses, pushed the company into a rare loss for the year.

And then things got better: SoftBank’s Vision Fund had a much better last six months than you probably guessed, and we need to understand why.

So, into the data we go, to have some laughs at the art that SoftBank cannot leave out of its reporting and learn a bit about what changed for the Vision Fund family.

Before we get to the turnaround, we need to understand how much damage the Vision Fund caused its parent company earlier this year.

To grok the impact that the Vision Fund’s rough patch caused SoftBank Group during the 12-month period ending March 31, 2020, we can glean all that we need from a single chart. Here’s SoftBank Group’s net income through its fiscal 2019: 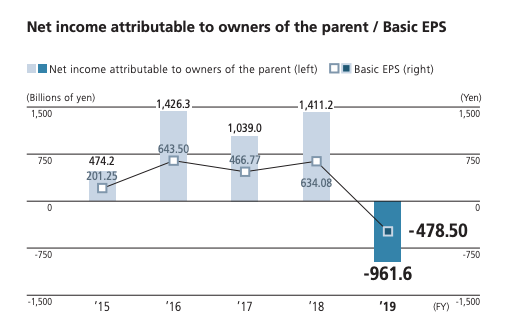 The period’s loss stands out like a sore thumb.

What drove the deficit? A ¥1.9 trillion segment loss from the Vision Fund, produced by declines in the “fair values of Uber and WeWork and its three affiliates,” along with the fair value of “other portfolio companies decreas[ing] significantly in the fourth quarter primarily due to the impact of the COVID-19 outbreak.”

It was brutal and humiliating to have raised so much money and invested it with such confidence only to have so many deals go sideways.

At the end of its fiscal 2019, SoftBank Group reported that the Vision Fund held 88 investments that had cost it $75 billion. The whole group was worth $69.6 billion, “excluding exited investments.”

Fast-forward to the company’s most recent report, covering the following six months — a period ending as September came to a close — and it’s hard to compare the two sets of results: SoftBank Group was back in the black, posting solid year-over-year gains from the same period of its preceding fiscal year.

Of course, SoftBank Group is far more than the Vision Fund — the company is a Japanese conglomerate with a huge telecom business that makes lots of money. But we care about its startup investing performance, so how did the Vision Fund itself impact its numbers in the six months concluding in September 2020?