New research has found that San Francisco and London have become two of the world’s leading hubs for VC investment into tech solutions that address one or more of the 17 UN’s Sustainable Development Goals (SDG), more commonly referred to as “Impact Tech”. They are followed by Paris, Berlin, Stockholm, Shanghai and Beijing.

Tech solutions for such pressing issues as the climate crisis and social inequality have seen a 280% increase in global VC investment from 2015 to 2020, while investment in this space more than doubled in both cities over the past five years. The report was put together by London & Partners and Dealroom as part of this week’s Silicon Valley Comes to the UK virtual event. More than 5,000 startups were surveyed to create the data.

According to the research, VC investment into London-based impact tech startups has grown by almost 800% (7.8 times) since 2015, compared to 3.1 times in Europe as a whole. 2020 is set to be a record year for London’s impact tech companies, which have received $1.2 billion in VC investment from January to October, already matching 2019 levels. London’s impact firms have also secured 429 deals between 2015 and 2020, more than any other city globally.

Gousto, a UK meal-kit service, raises another $41M as business booms under lockdown 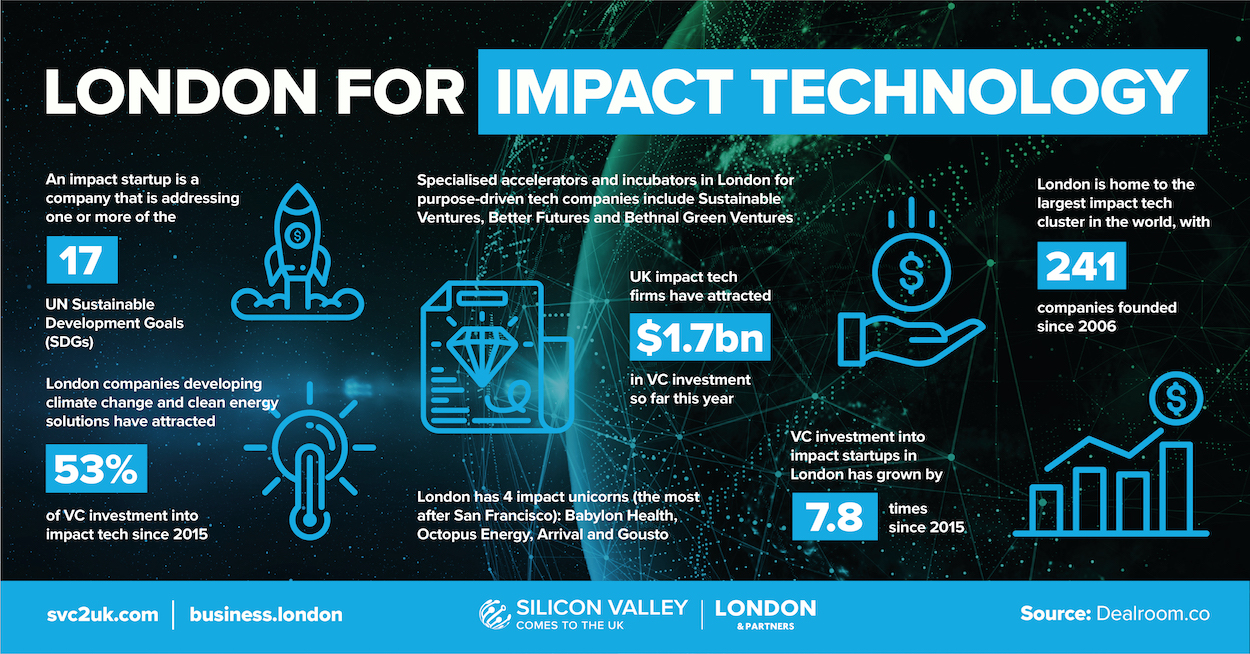 Climate change and clean energy solutions have attracted the most interest from investors in both cities, making up over 50% of overall VC investment over the last five years. Funding rounds including at least one North American investor made up $234 million of VC investment so far this year in London, up from $85 million in 2018, and equating to a fifth of all VC investment into London’s impact startups.

Funding rounds for London impact companies involving North American investors in 2020 include a $118 million growth equity round into Arrival by BlackRock, an $80 million Series B round for COMPASS Pathways and a $25 million Series C funding for Tractable.

Meanwhile, impact startups are crossing the pond in both directions. Arrival is now operating in Los Angeles, while Octopus Energy launched in the U.S. market in September after closing a $360 million funding round in April and acquiring Silicon Valley-based startup Evolve Energy. And San Francisco-based Allbirds, the sustainable shoe retailer, opened its first European flagship store in London in July 2018.

Commenting, Janet Coyle, managing director for business, London & Partners said: “San Francisco and London are two of the world’s top hubs for innovation and technology. But today’s figures also show that they are leading the way in creating purpose-driven companies striving to tackle some of the most pressing environmental and social challenges.”

The raw data from the research is posted below: