Venture capital continues to get a founder makeover.

Two years ago, I profiled Spearhead, a new program and fund created by Jeff Fagnan at Accomplice and Naval Ravikant, the co-founder of AngelList, to mentor leading founders into becoming the next-generation of angel and seed investors. The premise remains simple: offer founders with great networks and hustle $1 million in capital to go out and start writing angel checks and build their own portfolio. Provide a bit of infrastructure and support to guide their decisions, but otherwise, empower founders to learn the craft of investing, and in the process, perhaps even improve their own fundraising prowess.

Well, a lot has changed in the early-stage world, both broadly and with Spearhead over the past nearly three years.

In the last few months (partly driven by AngelList’s push), rolling funds have erupted to completely transform the solo and first-time capitalist world. Rolling funds allow newly minted VCs to raise smaller amounts of money over time rather than raising a whole fund first, which dramatically lowers the barriers to begin startup investing. How does Spearhead fit into such a world? That’s where the program’s new fund comes into play.

Spearhead announced today that it has raised $100 million for its fourth fund. The basic outline of the program remains the same, but what’s changed is what happens after the formal Spearhead program has finished. “Top-performing founders” will now get $5 million to stake a follow-on rolling fund, as determined by an LP committee. Half the fund is dedicated to follow-on investments, which means that $50 million will be invested in the pro-rata stakes of Spearhead investments. In an interview, Ravikant said “we’re scaling the dollars but we’re reducing the classes” and Fagnan chimed in saying “deeper, fewer bets.”

Applications for the fourth class of Spearhead founders are now open. 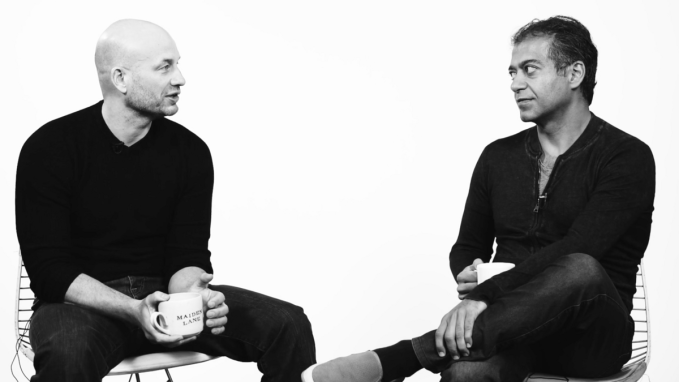 Jeff Fagnan and Naval Ravikant of Spearhead. Photo via Spearhead.

Spearhead isn’t built around formal lectures or material, but instead is designed to be an active community that helps train founders for two years and more to learn the art of investing. “We write down the guidelines on how to invest — the stuff that can be taught — on one sheet of paper,” Ravikant said. “And it’s pretty basic stuff … there’s no rocket science here. The work is in the actual day-to-day execution.” The real learning takes place around live deals where it’s all about the discussions between the partners and the other Spearhead participants and alumni.

Spearhead shared some data about where the program stands after about three years. Across three classes, 56 founders have joined the program (with eight unicorns represented), funding 380 startups with $18 million in capital. Among the founders in the program are Alexandr Wang of Scale AI (which was just offered funding at a $3 billion valuation according to The Information), Laura Behrens Wu of Shippo (which raised its Series C earlier this year) and Peter Reinhardt of Segment, which was just bought by Twilio for $3.2 billion.

Twilio wraps $3.2B purchase of Segment after warp-speed courtship

“We’re an investor, we’re not running a scout program,” Ravikant said. “We are the first and most value-added limited partner in a new GP’s career, and just like Y Combinator is sort of pulling these companies into existence, from school kids who otherwise would not have gotten the time of day, we are pulling these funds into existence by helping the founders who until now have been dabbling in angel investing and knew that down the road, they’d have to learn how to be a VC or an angel.”

As Spearhead has matured, the team has learned which founders have succeeded, and what their blind spots are. “The most successful founders in my mind that are Spearhead leads are people who did not consider themselves an angel investor before joining the program,” Fagnan said.

The challenge though has been, ironically for these people, ambition. “The main issue has just been investing too little,” Ravikant said. “They’ve been very timid starting out — as angels they’re used to writing 25 or 50K checks and the idea of writing a 100K or 200K or 500K check is very intimidating.” So, “the mistake so far has been just investing too little, but the quality of that is very, very high.”

With Spearhead’s new follow-on financing, the duo hope they can guide founders toward making bigger bets on riskier projects. They want founders not to have five successes across their five checks, but one mega-success and four failures. “What we’re trying to infuse in them is: we are risk capital and conviction capital [and] we really want them to be taking risks,” Fagnan said.

Unsurprisingly though, Ravikant is a long-term believer. “I personally now invest my own capital into every single Spearhead fund,” he said. “I think it’s basically one of the best deals in venture.”