In the past several weeks we’ve seen refreshes and product expansions from about every facet of the smart home virtual assistant world. Apple launched the HomePod Mini, Google offered a long-overdue refresh of the Google Home and Amazon found even more speaker shapes to shove Alexa into.

Today, we’re getting an addition from a startup competitor. Josh.ai has aimed to build out a niche in the space by building a smart assistant product that’s designed to be professionally installed alongside other smart home wares, and they announced a new product this afternoon.

The device, Josh Nano, fully buys into a more luxury home-focused niche with a low-profile device that appears to be a little bit bigger than a half-dollar, though the bulk of the device is embedded into the wall itself and wired back to a central unit via power-over-ethernet. The device bundles a set of four microphones eschewing any onboard speaker, instead opting to integrate directly with a user’s at-home sound system. Josh boasts compatibility with most major AV receiver manufacturers in addition to partnerships with companies like Sonos. There isn’t much else to the device; a light for visual feedback, a multi-purpose touch sensor and a physical switch to cut power to the onboard microphones in case users want extra peace of mind. 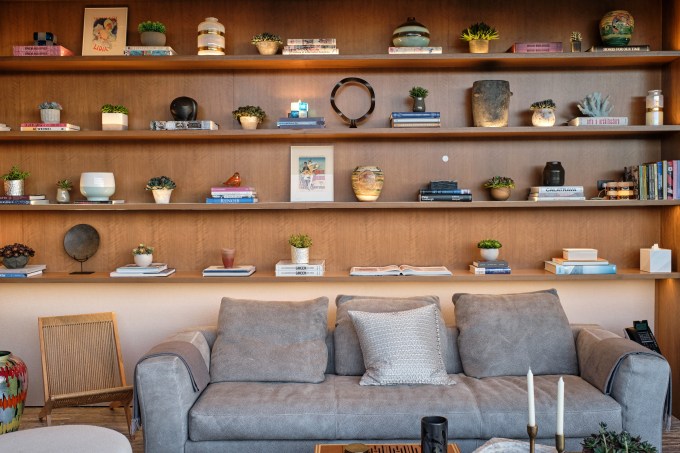 The aim of the new hardware is to hide the smart features of a home and move away from industry-standard touchscreen hubs with dated interfaces. By stripping down a smart home product to its essential feature, Josh.ai hopes it can push more users to buy in more fully with confidence that subsequent hardware releases won’t render their devices outdated and ugly. The startup is taking pre-orders for the device (available in black and white color options) now and hopes to start shipping early next year.

Powering these devices is a product the company calls Josh Core, a small server which basically acts as a hub for everything Josh talks to in a user’s home, ensuring that interactions between smart home devices can occur locally, minimizing external requests. The startup will also continue selling its previously released Josh Micro, which integrates a dedicated speaker into the wall-mounted hardware.

Though Josh.ai partners directly with professional installers on the hardware, the startup has been scaling as a software business, offering consumers a license to their technology on an annual, five-year or lifetime basis. The price of that license also differs depending on what size home they are working with, with “small” rollouts being classified as homes with fewer than 15 rooms. In terms of hardware costs, Josh.ai says that pricing varies, but for most jobs, the average cost for users works out to be something like $500 per room.

Massive tech companies naturally design their products for massive audiences. For startups like Josh.ai this fact provides an in-road to design products that aren’t built for the common needs of a billion users. In fact, the selling point for plenty of their customers comes largely from the fact that they aren’t buying devices from Google, Amazon or Apple and hard-wiring microphones that feed back to them inside their home.

Though 95% of the startup’s business today focuses on residential, going forward, the company is also interested in scaling how their tech can be used in commercial scenarios like conference rooms or even elevators, the startup tells me.