As part of its latest stunt, MSCHF, a venture-backed creative studio that’s smarter and more audacious than most, is poking a little fun at the venture industry itself and perhaps publications like TechCrunch too. The startup has spun out a rather simplistic app into a separate company and raised an undisclosed amount of seed funding from a very real venture capital firm at an eye-popping $200 million valuation.

For the time being, the actual completion of the legal paperwork to cement this valuation seems like a more complex hurdle than the technical challenges of building the app itself. Push Party is by all means a Gen-Z Yo, it does one thing and one thing only, allows people to push a button which sends a push notification to every user of the app. There are no friends, no groups, no influencers. It’s a big button that fires off an awful lot of notifications. 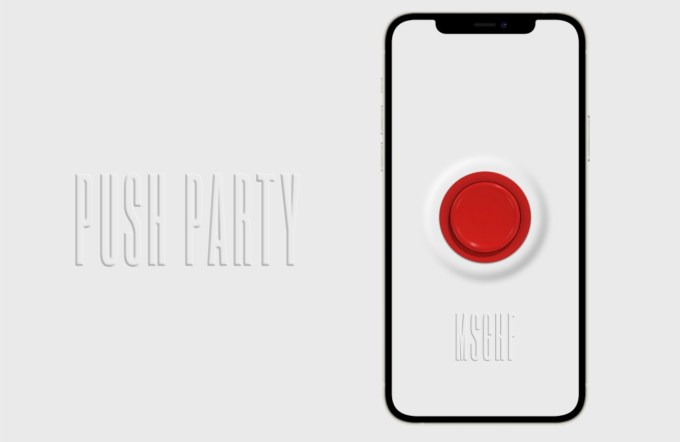 Like everything else MSCHF does, the app is designed with virality in mind. The startup’s last application they shipped, “Finger on the App” launched a huge online contest that ended after multiple winners who spent several days with their finger sitting on their phone screen. The fun with this rollout is that there’s no telling who pushed the button especially when users can set their own user names and unsurprisingly seem keen to pick celebrity names.

If the app Push Party takes some heavy inspiration from Yo, it’s also taking a page from what helped make it famous, namely a quizzically high early valuation for a product that did almost nothing. Back in simpler times, 2014, Yo raised $1.5 million on $10 million. But fast forward to 2020 and earning a $10 million valuation for a half-baked conceptual take doesn’t mean quite as much, it’s been normalized to a degree. As a result, MSCHF upped the ante and banked a $200 million valuation for Push Party in this raise.

It used to be that a $200 million valuation was a sign of late-stage traction rather than early-stage hype, but high valuations have grown increasingly common for investors racing to win the most competitive deals. Earlier this summer, audio startup Clubhouse raised eyebrows when it banked a $100 million early valuation, and just a few months ago, Roam, a note-taking app with a cult following raised a seed round on $200 million.

Push Party’s round was financed by Founders Fund with Principal Trae Stephens driving the deal. If you’re puzzled how the MSCHF team bagged a real investor from a real firm for a dubiously real project, the mystery fades when you find Stephens is unsurprisingly a backer of MSCHF itself. Stephens is by all means, in on the joke.

In a tongue-in-cheek press release, Stephens notes that, “We were a bit concerned by the valuation at first, but I told my people to run toward gunfire for anything less than $250 million.”

Is any of this real? Well, MSCHF insists that they went through all of the legal steps of incorporating Push Party and raising this round. How much the startup actually raised is perhaps more suspect, it’s unclear whether this was a $1 million investment or $1,000, the team wasn’t too keen to go into details there, though I did ask someone from MSCHF whether the round was more than $100, and they confirmed that it was indeed more than $100.

Though the company refused to dissect what exactly it’s trying to communicate here, I think a good part of it is just poking at the idea that in today’s climate of ridiculous valuations there’s a tendency for some fairly nebulous numbers to signal value or innovation where this isn’t quite as much. And that often times a high valuation from a prestigious firm is a vote of confidence that drives Silicon Valley watchers to drive downloads while other investors toss in checks, engineers send in job applications and, yes, journalists write stories.