Welcome back to Human Capital and congrats on making it through one of the hardest weeks of the longest year.

Now that the Associated Press has called the election in favor of Joe Biden, it should be good news for DEI practitioners, who expressed some worry they’d be out of a job if Trump was allowed to continue on his path of destruction.

Meanwhile, over in California, the Uber and Lyft-backed gig worker ballot measure, Prop 22, passed. We’ll get into what that all means and the implications moving forward.

Human Capital is a weekly newsletter that lands in subscribers’ inbox every Friday at 1 p.m. PT. Sign up here to receive it.

Gig workers will continue being independent contractors in CA

As y’all may have seen by now, the Uber and Lyft-backed gig worker measure, Proposition 22, passed in California.

The current count is 58.4% in favor of Prop 22 and 41.6% in opposition. Below, you can see how mostly counties in Northern California along the coast drove the opposition. 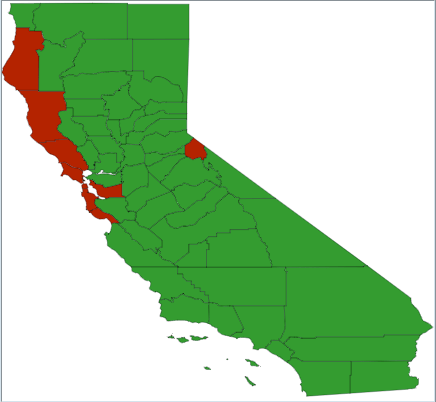 That means gig workers will continue to be classified as independent contractors in the state. It also essentially makes these gig companies exempt from AB-5, the gig worker bill that went into law at the beginning of the year. Lastly, it means we can expect these gig companies, which spent $205 million on the ballot measure, to seek similar legislation in other states.

“To get Prop 22 passed, gig companies — which have yet to turn a profit — spent a historic $205 million on their campaign, effectively creating a political template for future anti-democratic, corporate law-making,” Meredith Whittaker, co-founder of AI Now Institute and Veena Dubal, professor of law at the University of California, Hastings, wrote.

On Uber’s earnings call this week, Uber CEO Dara Khosrowshahi said the company would “more loudly advocate for laws like Prop 22” throughout the U.S. and worldwide.

Meanwhile, labor groups are already planning their next steps forward. Partnerships for Working Families, for example, is considering potentially lobbying the hopeful Biden administration’s Department of Labor for better federal laws for worker classification, according to Cal Matters. Other options entail suing for issues around worker’s compensation requirements or the ⅞ supermajority needed to amend Prop 22.

Below are statements issued over the past couple of days from interested parties.

Uber CEO Dara Khosrowshahi to drivers: “With this vote, drivers and delivery people will get what so many of you have been asking for: access to benefits and protections, while maintaining the flexibility and independence you want and deserve.

The future of independent work is more secure because so many drivers like you spoke up and made your voice heard—and voters across the state listened.”

Lyft Chief Policy Officer Anthony Foxx: “California voters have spoken, and they stood with more than a million drivers who clearly said they want independence plus benefits. Prop 22 is now the first law in the nation requiring health, disability and earnings benefits for gig workers. Lyft stands ready to work with all interested parties, including drivers, labor unions and policymakers, to build a stronger safety net for gig workers in the U.S.”

DoorDash CEO Tony Xu: Passing Prop 22 is a big win for Dashers, merchants, customers, and communities. Californians sided with drivers, recognizing the importance of flexible work and the critical need to extend new benefits and protections to drivers like Dashers

Gig Workers Rising: “Billionaire corporations just hijacked the ballot measure system in California by spending millions to mislead voters. The victory of Prop 22, the most expensive ballot measure in U.S. history, is a loss for our democracy that could open the door to other attempts by corporations to write their own laws.”

Gig Workers Collective: “Our organizing has always been untraditional since we aren’t classified as employees and don’t have the legal protections to organize or unionize, but we still found a way to build worker power and fight back. We’re disappointed in tonight’s outcome, especially because this campaign’s success is based on lies and fear-mongering. Companies shouldn’t be able to buy elections. But we’re still dedicated to our cause and ready to continue our fight.”

Uber Chief Diversity Officer Bo Young Lee said on Twitter that for many DEI professionals, “the results of the election will impact how we do our jobs and may even impact if we have jobs in the long term.”

Now that Biden is the presumptive president, the change in the administration will likely mean a change in the executive order banning types of diversity training for federal contractors.

On this week’s episode of Mixtape, we spoke with Shine app founder Marah Lidey about mental health. We spoke about the psychological and physiological manifestations of racism, the adverse effects of 2020 and how Black death isn’t new, but it’s finally getting global attention.

“Nothing necessarily new is happening with Black people dying in the streets,” Lidey said. “[Black people] all know that. But when all of your friends and co-workers become aware in this very new way and want to understand and want to share and want to ask you questions and you’re watching this play out at this national level and you’re bombarded at the global level, right I mean, this is in our DNA. Our cells were in the cells of those people who were enslaved.”’

You can check out the full conversation here.

Yelp adds a new director to its board

Yelp announced the addition of Tony Wells, chief brand officer at USAA, to its board of directors. Wells also just so now happens to be Yelp’s only Black director on the board.

“Tony is the fifth Board member we’ve welcomed to Yelp over the last couple of years, as we further diversify and refresh the Board’s collective expertise in relevant verticals in order to best serve the company and our shareholders as we embark on our next chapter,” Yelp CEO Jeremy Stoppelman said in a statement. “We welcome Tony’s creativity and perspective, and we are thrilled to have him join our Board.”