Meditation app Calm’s brilliant and hilarious marketing campaign that saw it sponsoring CNN’s coverage of the 2020 U.S. presidential election results this week seems to have paid off for the business. The app, which today offers mindful meditations, peaceful sounds and sleep stories, had flashed on screen during CNN’s “Key Race Alert” coverage, reminding users of the need to relax during this stressful time.

According to data from third-party app store analytics and marketing firms Sensor Tower and App Annie, these CNN advertisements appear to have helped substantially boost Calm’s downloads (as determined by the app’s chart rankings).

On iPhone in the U.S., App Annie says Calm moved up 20 ranks from the day before Election Day to reach No. 79 Overall across both apps and games in the U.S. It also reached No. 1 in the U.S. Health & Fitness category. 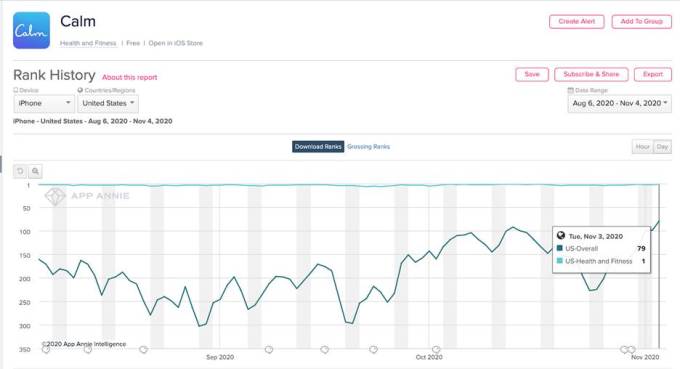 Meanwhile, Sensor Tower found that the app moved up again on November 4, climbing 51 spots from the prior day to reach No. 68 among the top free iPhone apps on the U.S. App Store.

The firm notes this is the highest the app has ranked since July 21, when it hit No. 60 — a jump that was likely boosted by the release of Harry Styles’ Sleep Story. While Calm did add another new Sleep Story on October 30, it didn’t appear to have an impact the way that Styles’ Story had, Sensor Tower said.

A spokesperson for Calm explained the company’s decision to run the CNN ad campaign was about associating its brand with the anxiety that its meditations and relaxing sounds help to address.

“We understand the uncertainty of this election cycle can be a source of anxiety for many of us, especially as it coincides with an ongoing pandemic,” the spokesperson said. “Our goal during CNN’s Key Race Alerts was to provide viewers a moment of Calm, and a reminder to take a deep breath during a stressful night,” they added.

The company declined to confirm the third-party estimates, however.

Overall, the CNN ad campaign worked for Calm because it was almost a troll on how stressed people have been this week as election results poured in — and particularly by CNN’s “Key Race Alert” music that plays when there’s an important update.

The CNN KEY RACE ALERT is sponsored by the Calm app lmao pic.twitter.com/MSg3FYBFyK

In addition to running ads on CNN, Calm launched a refreshed resource hub with free mindfulness tools, including Sleep Stories, meditations, music and other mindfulness content, ahead of the elections.

And just ahead of November 3, it partnered with mobile news organization NowThis to create a soothing live stream that ran on NowThis’ Facebook and YouTube pages on November 3 through November 4.

Outside of its CNN sponsorship, Calm has been working to capitalize on increased TV viewing around the election to gain attention for its anxiety-reducing resources, as well.

According to data from iSpot.tv, reported by AdAge, Calm’s app saw 66 million total impressions from October 31 through November 3, with 11 million on Election Day alone. And over the last 30 days, Calm saw 241.7 million TV ad impressions, valued at $1.4 million.