Both apps are using the same language for their respective notifications:

“The winner of the 2020 U.S. Presidential Election has not been projected yet. See more updates and learn what to expect as the election process continues.”

Critically, Facebook and Instagram have also added a timestamp to the notification to indicate its recency. As of November 4 at 9:57 a.m. EST, for example, the notification read that it was last updated at 9:00 a.m. EST. 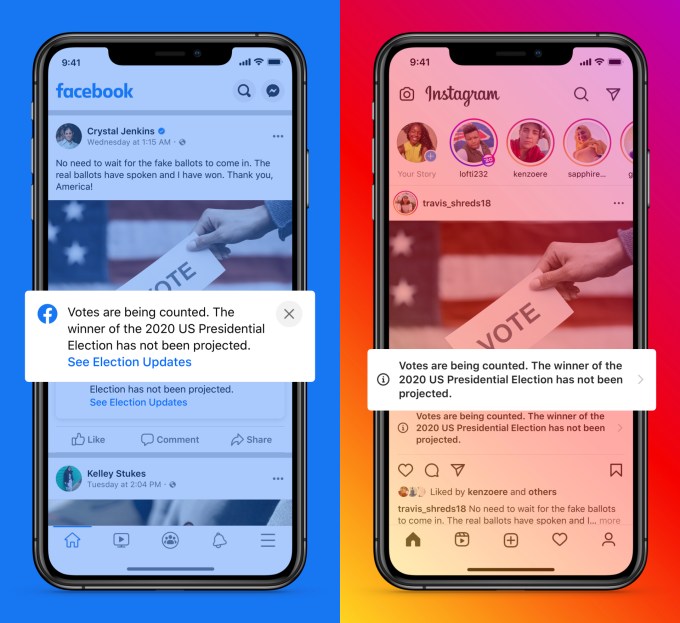 The addition of a timestamp is useful not only because election results are still being counted — and will be for days to come, most likely — but also because President Trump prematurely claimed election victory early Wednesday morning before all votes were counted.

Facebook tells TechCrunch it began showing these notifications at the top of Facebook and Instagram feeds shortly after Trump posted to Facebook that he had won. The company also began labeling posts from both Trump and Vice President Biden in accordance with the policies it shared ahead of Election Day, it says.

On Facebook, Trump’s message earned itself a label that reminded users that election night results and final results may differ, but Facebook didn’t otherwise restrict the post.

As we noted at the time of the labeling, Facebook had begun displaying the notifications about there being no projected winner.

Having a timestamp on these posts is also important in the case that either app faces any sort of caching issues that would allow users to see out-of-date data, temporarily, until the app was refreshed.

This was an issue on Instagram yesterday, November 3, when a caching issue led to some users seeing a notification that read, vaguely, “Tomorrow is Election Day,” when in fact Election Day had already arrived.

Similarly, some users may not immediately see the notification appearing at the top of their Feed on Facebook or Instagram until their app refreshes. But there are no widespread complaints about this sort of issue today.