PayPal this week laid out its vision for the future of its digital wallet platform and its PayPal and Venmo apps. During its third-quarter earnings call on Monday, the company said it plans to roll out substantial changes to its mobile apps over the next year to integrate a range of new features, including enhanced direct deposit, check cashing, budgeting tools, bill pay, crypto support, subscription management, buy now/pay later functionality and all of Honey’s shopping tools.

While PayPal had spoken in the past about bringing Honey’s capabilities into PayPal, CEO Dan Schulman detailed the integrations PayPal has in store for the deal-finding platform it bought last year for $4 billion, as well as a timetable for both this and the other app updates it has in store.

The Honey acquisition had brought 17 million monthly active users to PayPal. These users turned to Honey’s browser extension and mobile app to find the best savings on items they want to buy, track prices and more.

But today, the Honey experience still remains separate from PayPal itself. That’s something the company wants to change next year.

According to Schulman, the company’s apps will be updated to include Honey’s shopping tools, like its Wish List feature that allows you to track items you want to buy, price monitoring tools that alert you to savings and price drops, plus its deals, coupons and rewards. These tools will become part of PayPal’s checkout solution itself.

That means the company will be able to track the customer from the initial deal-hunting phase where they’re indicating their interest in a certain product, target them with savings and offers, then guide them through its checkout experience all in one place.

PayPal will also provide “anonymous demand data” to merchants based on consumer engagement with Honey’s tools to help them drive sales, the company said.

What’s more, PayPal put timeline on the Honey integrations and the other updates it plans to roll out over the course of the next year.

Bill Pay will start to roll out this month, PayPal said, with a large redesign of the digital wallet experience expected for the first half of 2021. Much of the new functionality will be arriving in the second quarter and the second half of the year, with a goal of having the majority of the changes rolled out by the end of next year.

This also includes PayPal’s plans for cryptocurrencies, announced at the end of October. The company aims to support Bitcoin, Ethereum, Bitcoin Cash and Litecoin at first, initially in the U.S.

PayPal to let you buy and sell cryptocurrencies in the US

Speaking to investors during the earnings call, Schulman also noted when PayPal plans to bring crypto to more users and geographies. He said the ability to buy, sell and hold cryptocurrencies will first arrive in the U.S., then will roll out to international markets and the Venmo app in the first half of next year. (Currently, PayPal is offering U.S. users to join a waitlist for the new crypto features in-app). 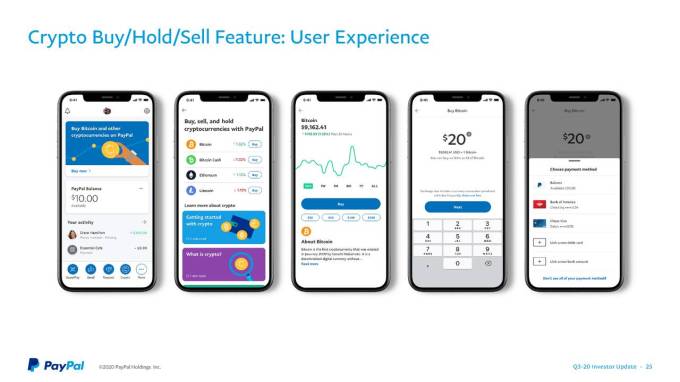 This change will allow PayPal’s users to shop using cryptocurrencies across the company’s 28 million merchants without requiring additional integrations on merchants’ part. The company explained this is due to how it will handle the settlement process, where users will be able to instantaneously transfer crypto into fiat currency at a set rate when checking out with PayPal merchants.

“This solution will not involve any additional integrations, volatility risk or incremental transaction fees for either consumers or merchants, and will fundamentally bolster the utility of cryptocurrencies,” said Schulman. “This is just the beginning of the opportunities we see as we work hand in hand with regulators to accept new forms of digital currencies,” he added.

PayPal also recently joined the “buy now, pay later” race with its new “Pay in 4” installment program that lets consumers split purchases into four payments. This debuted in France ahead of its late August U.S. launch and has since rolled out to the U.K. (as Pay in 3). This too, will become more integrated into the company’s apps in the months ahead.

Venmo — which the company expects to reach $900 million in revenues next year — will see the expansion of business profiles, and will gain crypto capabilities, more basic financial tools and shopping tools, as well as a revamp of the “Pay with Venmo” checkout experience.

Schulman referred to the company’s plans to overhaul its Venmo and PayPal apps as a “fundamental transformation,” due to how much new functionality they will include as the changes roll out over the next year as well as the new user experience — basically, a redesign — that will allow people to move easily from one experience to the next instead of having to change apps or use a desktop browser, for example.

PayPal’s earnings hadn’t excited Wall Street investors this week, sending the stock down on its lack of 2021 guidance. But the year ahead for PayPal’s digital wallet apps looks to be an interesting one.