Stensul, a startup aiming to streamline the process of building marketing emails, has raised $16 million in Series B funding.

When the company raised its $7 million Series A two years ago, founder and CEO Noah Dinkin told me about how it spun out of his previous startup, FanBridge. And while there are many products focused on email delivery, he said Stensul is focused on the email creation process.

Dinkin made many similar points when we discussed the Series B last week. He said that for many teams, creating a marketing email can take weeks. With Stensul, that process can be reduced to just two hours, with marketers able to create the email on their own, without asking developers for help. Things like brand guidelines are already built in, and it’s easy to get feedback and approval from executives and other teams.

Dinkin also noted that while the big marketing clouds all include “some kind of email builder, it’s not their center of gravity.”

He added, “What we tell folks [is that] literally over half the company is engineers, and they are only working on email creation.” 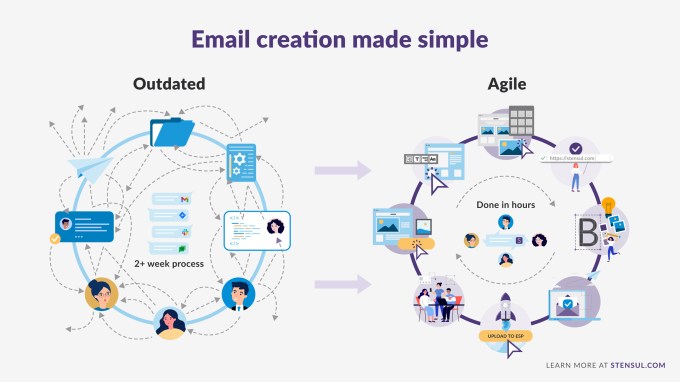 The team has recently grown to more than 100 employees, with new customers like Capital One, ASICS Digital, Greenhouse, Samsung, AppDynamics, Kroger and Clover Health. New features include an integration with work management platform Workfront.

Plus, with other marketing channels paused or diminished during the pandemic, Dinkin said that email has only become more important, with the old, time-intensive process becoming more and more of a burden.

“We need more emails — whether that’s more versions or more segments or more languages, the requests are through the roof,” he said. “The teams are the same size … and so that’s where especially the leaders of these organizations have looked inward a lot more. The ways that they have been doing it for years or decades just doesn’t work anymore and prevents them from being competitive in the marketplace.”

Dinkin said the money will allow Stensul to expand its marketing, product, engineering and sales teams.

“We originally thought: Everybody who sends email should have an email creation platform,” he said. “And ‘everyone who sends email’ is synonymous with ‘every company in the world.’ We’ve just seen that accelerate in that last few years.”

How to get people to open your emails