It wasn’t the lingering exhaustion that made Christine Huang, a New York public school teacher, leave the profession. Or the low pay. Or the fact that she rarely had time to spend with her kids after the school day due to workload demands.

Instead, Huang left teaching after seven years because of how New York City handled the coronavirus pandemic in schools.

“Honestly, I have no confidence in the city,” she says. Tensions between educators and NYC officials grew over the past few weeks, as school openings were delayed twice and staffing shortages continue. In late September, the union representing NYC’s principals called on the state to take control of the situation, slamming Mayor de Blasio for his inability to offer clear guidance.

Now, schools are open and the number of positive coronavirus cases are surprisingly low. Still, Huang says there’s a lack of grace given to teachers in this time.

Huang wanted the flexibility to work from home to take care of her kids who could no longer get daycare. But her school said that, while kids have the choice on whether or not to come into class, teachers do not. She gave her notice days later.

There are more than 3 million public school teachers in the United States. Over the years, thousands have left the system due to low pay and rigid hours. But the coronavirus is a different kind of stress test. As schools seesaw between open and closed, some teachers are left without direction, feeling undervalued and underutilized. The confusion could usher numbers of other teachers out of the field, and massively change the teacher economy as we know it.

Teacher departures are a loss for public schools, but an opportunity for startups racing to win a share of the changing teacher economy. Companies don’t have the same pressures as entire school districts, and thus are able to give teachers a way to teach on more flexible hours. As for salaries, edtech benefits from going directly to consumers, making money less of a budget challenge and more of a sell to parents’ wallets.

There’s Outschool, which allows teachers to lead small-group classes on subjects such as algebra, beginner reading or even mindfulness for kids; Varsity Tutor, which connects educators to K-12 students in need of extra help; and companies such as Swing and Prisma that focus on pod-based learning taught by teachers.

The startups all have different versions of the same pitch: they can offer teachers more money, and flexibility, than the status quo.

There’s a large geographic discrepancy in pay among teachers. Salaries are decided on a state-by-state and district-by-district level. According to the National Center for Education Statistics, a teacher who works in Mississippi makes an average of $45,574 annually, while a teacher in New York makes an average of $82,282 annually.

Although cost of living factors impacts teacher salaries like any other profession, data shows that teachers are underpaid as a profession. According to a study from the Economic Policy Institute, teachers earn 19% less than similarly skilled and educated professionals. A 2018 study by the Department of Education shows that full-time public school teachers are earning less on average, in inflation-adjusted dollars, than they earned in 1990.

The variance of salaries among teachers means that there’s room, and a need, for rebalancing. Startups, looking to get a slice of the teacher economy, suddenly can form an entire pitch around these discrepancies. What if a company can help a Mississippi teacher make a wage similar to a New York teacher?

Reach Capital is a venture capital firm whose partners invest in education technology companies. Jennifer Carolan, co-founder of the firm, who also worked in the Chicago Public School system for years, sees coronavirus as an accelerator, not a trigger, for the departure of teachers.

“We have an education system where teachers are underpaid, overworked, and you don’t have the flexibility that has become so important for workers now,” she said. “All these things have caused teachers to seek opportunity outside of the traditional schooling system.”

Carolan, who penned an op-ed about teachers leaving the public school system, says that new pathways for teachers are emerging out of the homeschooling tech sector. One of her investments, Outschool, has helped teachers earn tens of millions this year alone, as the total addressable market for what it means to be “homeschooled” changed overnight.

Education technology services have created a teacher gig economy over the past few years. Learning platforms, with unprecedented demand, must attract teachers to their service with one of two deal sweeteners: higher wages or more flexible hours.

Outschool is a platform that sells small-group classes led by teachers on a large expanse of topics, from Taylor Swift Spanish class to engineering lessons through Lego challenges. In the past year, teachers on Outschool have made more than $40 million in aggregate, up from $4 million in total earnings the year prior.

CEO Amir Nathoo estimates that teachers are able to make between $40 to $60 per hour, up from an average of $30 per hour in earnings in traditional public schools. Outschool itself has surged over 2,000% in new bookings, and recently turned its first profit.

Outschool makes more money if teachers join the platform full-time: teachers pocket 70% of the price they set for classes, while Outschool gets the other 30% of income. But, Nathoo views the platform as more of a supplement to traditional education. Instead of scaling revenue by convincing teachers to come on full-time, the CEO is growing by adding more part-time teachers to the platform.

Outschool competitor Varsity Tutors is taking a different approach entirely, focusing less on hyperscaling its teacher base and more on slow, gradual growth. In August, Varsity Tutors launched a homeschooling offering meant to replace traditional school. It onboarded 120 full-time educators, who came from public schools and charter schools, with competitive salaries. It has no specific plans to hire more full-time teachers.

Brian Galvin, chief academic officer at Varsity Tutors, said that teachers came seeking more flexibility in hours. On the platform, teachers instruct for five to six hours per day, in blocks that they choose, and can build schedules around caregiver obligations or other jobs.

Varsity Tutors’ strategy is one version of pod-based learning, which gained traction a few months ago as an alternative to traditional schooling. Swing Education, a startup that used to help schools hire substitute teachers, pivoted to help connect those same teachers to full-time pod gigs. Prisma is another alternative school that trains former educators, from public and private schools, to become learning coaches.

Pod-based learning, which can in some cases cost thousands a week, was popular among wealthy families and even led to bidding wars for best teacher talent. It also was met with criticism, suggesting the product wasn’t built with most students in mind.

Can learning pods scale, or are they widening edtech’s digital divide?

The reality of next job

A tech-savvy future where students can learn through the touch of a button, and where teachers can rack in higher earnings, is edtech’s goal. But that path is not accessible for all.

Some tutoring startups could create a digital divide among students who can pay for software and those who can’t. If teachers leave public schools, low-income students are left behind and high-income students are able to pay their way into supplemental learning.

Still, some don’t think it’s the job of public school teachers, the vast majority of which are female, to work for a broken system. In fact, some say that the whole concept of villainizing public school teachers for leaving the system comes with ingrained sexism that women have to settle for less. In this framework, startups are both a bridge to a better future for teachers and a symptom of failures from the public educational systems.

Huang, now on the job hunt, says that the opportunities that edtech companies are creating aren’t built for traditional teachers, even though they’re billed as such. So far, she has applied to curriculum design jobs at educational content website BrainPop, digital learning platform Newsela, math program company Zearn and Q&A content host Mystery.org.

“What I’m finding is that a lot of edtech companies don’t seem to value our skills as teachers,” she said. “They’re not looking for teachers, they’re looking for coders.”

Edtech has been forced to meet increasing demand for services in a relatively short time. But the scalability could inherently clash with what teachers came to the profession to do. Suddenly, their work becomes optimized for venture-scale returns, not general education. Huang feels the tension in her job interviews, where she feels like recruiters don’t pay attention to creativity, knowledge and human skills needed for managing students. She has created 30 different versions of her resume.

The lack of suitable jobs made Huang decide to go on childcare leave instead of quitting the education system entirely, in case she needs to return to the traditional field. She hopes that is not the case, but isn’t optimistic just yet.

“I haven’t gotten a whole lot of interviews, because people see my resume; they see that I’m a teacher, and they automatically write me off,” she said. 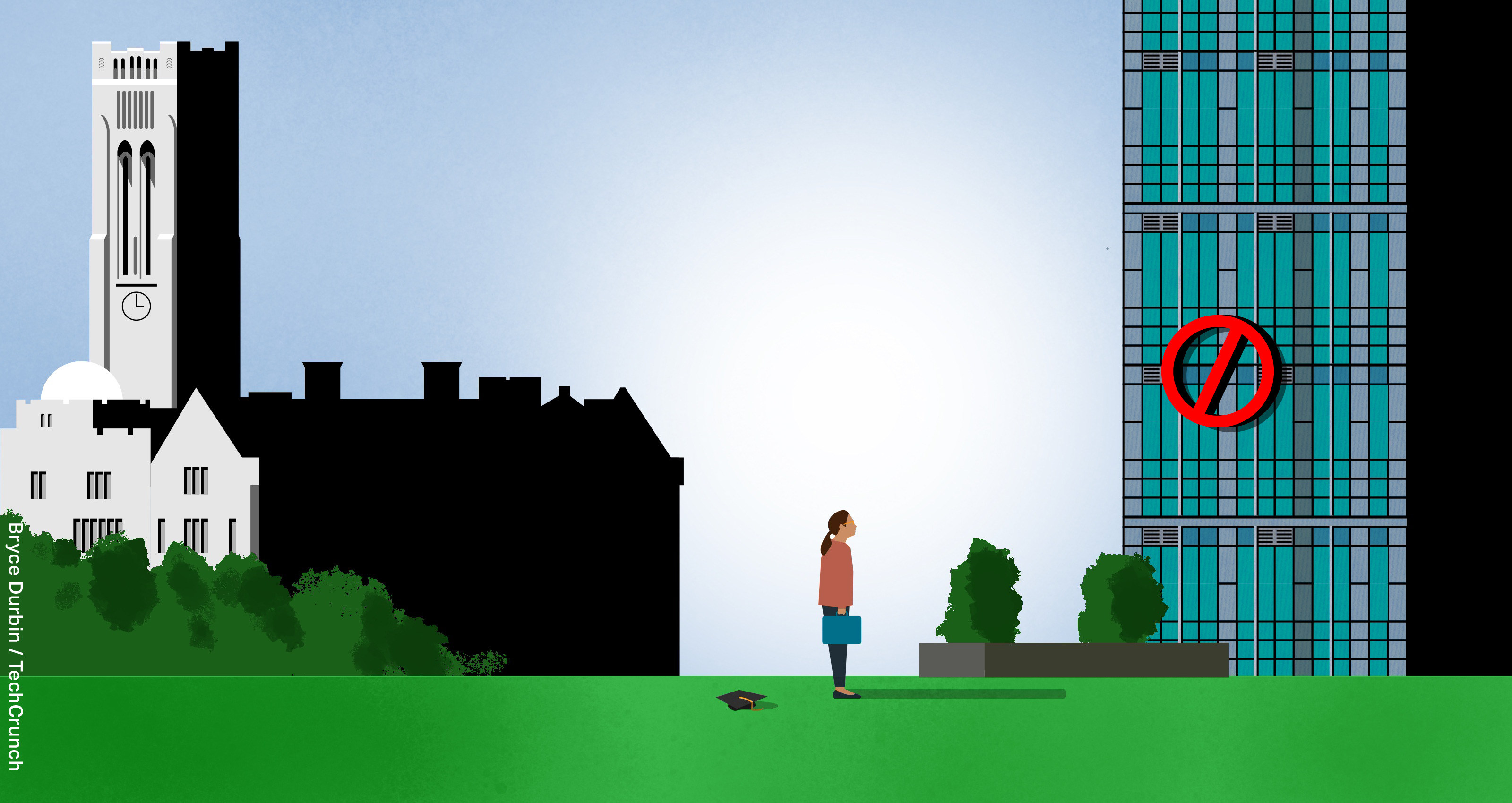