I get to play with a lot of new hardware from startups and it runs the gamut from super polished to barely working, neither of which is a value judgement! But every once in a while I get to mess with a new piece of kit that is just so fully realized that I am literally shocked.

The Backbone One controller is one of those situations. It’s a game controller for iPhones that has slick ergonomics, solid button feel, sensitive analog triggers and great build quality. But what makes Backbone One special is the companion app and service that ships with it and enables a truly clever software layer enabling cross-app multiplayer, game recording, highlight editing and quick swap.

The controller is around 7” long in its compact state and uses a clever sliding mechanism to expand outwards to up to 10” in size. It easily fits Apple’s “Plus” sized phones and when you’re using one of those it feels like a full on game console for the first time I can remember.

There are acoustic tunneling scoops at the inside edges that direct sound forward from the phone speakers and there is work being done behind the scenes to cancel out the specific sounds the Backbone One’s buttons make so that you don’t hear those while you’re playing.

But it’s the software that makes Backbone One really special.

To co-opt a biblical phrase, hardware without software is dead. And the Backbone One is really, really alive.

Behind the Backbone One is Backbone itself, which is a ‘companion app’ but is really a live gaming service. It has integrated cross-game voice chat, game switching, parties and a friends list. It lets you get push notifications when your friends are on and slide right into a game with them with a single tap. It’s remarkably slick and feels as first-party as you could make something that is literally not first-party feel.

Backbone was founded by Maneet Khaira in the summer of 2018 while interning at YouTube and wrapping up at Columbia.

Khaira notes that one of the biggest issues in mobile gaming is that there is a ton of activation energy when it comes to jumping in and playing with friends. The major games are there: Call of Duty, Fortnite (eventually, again), PUBG — but the last mile issue is major. 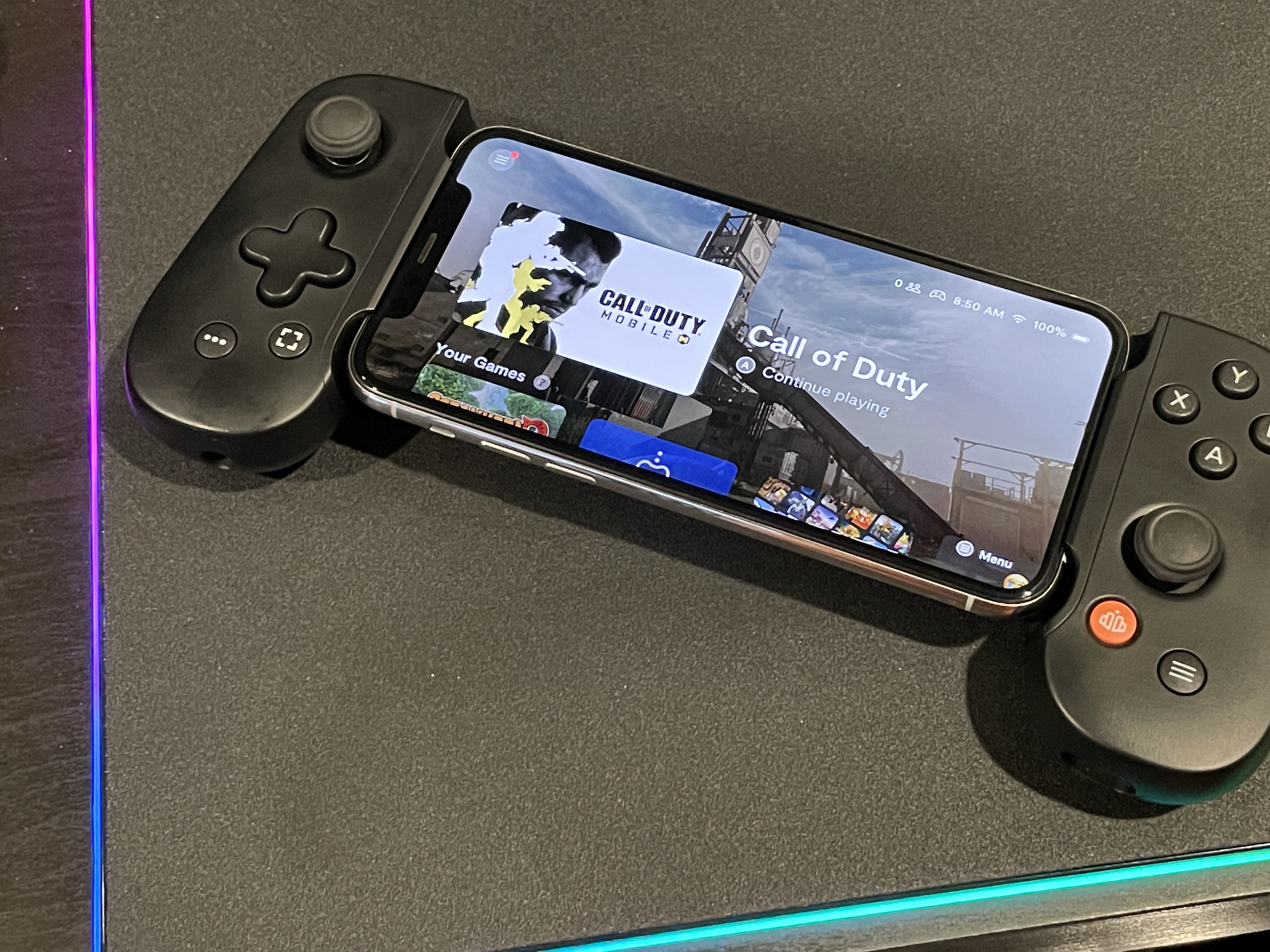 Khaira points out that while there are plenty of examples of top-tier gaming titles on iPhone, there is just a desert of content created on these platforms available to watch on Twitch or YouTube. He likens it to a hysteresis — a lagging behind of an effect from its cause. There are so many mobile gamers that there should be a ton of mobile content shared, but because the mechanisms to do so have been so poor and so under-crafted, we have next to nothing.

Here are the basic pillars of Backbone:

Because Backbone is a support app, it gets a bunch of special privileges that would normally not be granted to a ‘regular’ class of app. Backbone One is always on while it’s attached, which means that the app can do whatever it needs to do no matter what app you’re in or for how long. This is huge because it enables the Backbone button on the controller to add games to your dashboard, swap easily between them and lets you get at your friends list contained in Backbone.

The stopwatch time for attaching the Backbone One to your phone and beginning to play a game in multiplayer is measured in seconds, not minutes. It’s exactly what you need in the mobile context.

It also enables any-time recording of clips and highlights that store locally on your device but can be uploaded anywhere at 1080p/30fps HEVC. When you’re in game you can just smash the Capture button to start recording and tap it to screenshot. The Backbone app also has some ML work going on to identify highlight-worthy clips and mark them automatically. You can also tag them yourself while you play.

And Backbone One does this on less power than the crap earbuds that (used to) come in an iPhone box. You won’t notice any major power drain from the accessory itself.

If Backbone can manage to get a partnership with one or two majors to have a built-in control scheme that takes advantage of the proper dead zones and timing it could be a real watershed moment for mobile gaming.

But right now it works with most games that have controller support right out of the box. No game needs to do anything special to take advantage of the majority of Backbone features. This basically adds on a layer of inter-game social and clip sharing.

It’s all of the basic features of Game Center, Twitch, PSN and Xbox Live rolled into one — but on iPhone. And, of course, the BackBone one works just fine with Xbox and PlayStation remote play apps.

Sometimes a list of investors can tell you a lot about how serious a company is about getting the right kind of money. For a company building a gaming service and peripheral hardware, Backbone couldn’t have a more solid column. Backbone is backed by MrBeast, Preston, Kwebbelkop, Typical Gamer, Night Media, Nadeshot, and Ludlow Ventures, as well as Ashton Kutcher and Guy Oseary’s Sound Ventures. Pretty much exactly the profile I would want to see for a company serious about social and mobile gaming.

In many ways, Backbone feels like a spiritual successor to OpenFeint. If you’re not familiar, OpenFeint was the first modern mobile gaming network. It launched the year after the iPhone App Store and was part of a game called Aurora Feint. It enabled multiplayer, scoreboards and messaging. The founder of OpenFeint? Jason Citron. Jason’s current startup, that also shares a lot of spiritual luggage with OpenFeint? Discord.

It’s hard to overstate how important OpenFeint was at the time. As the app ecosystem was emerging it was clear that games would be a big part of what made the iPhone successful and this was the first cross-game network that allowed people to take advantage of one of the first phones to have a persistent, high-quality (ish) internet connection. Apple launched Game Center as a basic response to this need but it has never put any real investment behind it since. Backbone is so good that I could actually see Apple hauling out the repo and assigning engineering talent to get it working well again. The time has come for this idea and Backbone’s execution is so top notch here that it makes the case open and shut.

I’ve been testing the controller for a few weeks now with a variety of games. I played a quick match of Call of Duty Warzone with Khaira and even though we didn’t secure the dub it was massively more playable than running with touch controls. My very first session of CoD I had a 28 kill game in cod mobile and, even though I was put into a lobby that prioritizes controller users the other players had like 5 kills each. Though you can now pair console controllers to iPhone, the Backbone is so much better than any of the other integrated controllers on the market that it will quickly become a must have for any mobile player that actually wants to be competitive. I have spent as much time with Apple mobile hardware and the people that have created it as probably anyone on the planet so please understand that I don’t say this lightly but this really feels like the game controller and network Apple would have made if it understood competitive games.

The Backbone One controller runs $99 and can be purchased via the free Backbone app today.