Instagram is adapting to the way creators have been using its service during the coronavirus pandemic. With individuals and businesses now limited from hosting in-person events — like concerts, classes, meetups, and more — users have turned to Instagram to live stream instead. Today, the company says it’s significantly expanding the time limit for these streams, from 1 hour to now 4 hours for all users worldwide.

The change, the company explains, is meant to help those who’ve had to pivot to virtual events, like yoga and fitness instructors, teachers, musicians, artists and activists, among others. During the height of government lockdowns in the U.S., Instagram Live became a place for people to gather as DJ’s hosted live sets, artists played their music for fans, celebs hosted live talk shows, workout enthusiasts joined live classes, and more. Live usage had then jumped 70% over pre-coronavirus numbers in the U.S. as people connected online.

Many of these Instagram Live creators had wanted to extend their sessions beyond the 60 minute time limit without an interruption.

The change puts Instagram on par with the time limits offered by Facebook for live streams from mobile devices, which is also 4 hours. (If live streaming from a desktop computer or via an API, the Facebook time limit expands to 8 hours.)

While the longer time limit is opening up to all creators worldwide starting today, Instagram says the creator’s account has to be “good standing” in order to take advantage. That means the account can’t have a history of either intellectual property or policy violations.

Related to this change, Instagram will also update the “Live Now” section in IGTV and at the end of live streams to help direct users to more live content.

Instagram also today pre-announced another feature which has yet to arrive.

It says that it will “soon” add an option that will allow creators to archive their live streams for up to 30 days. 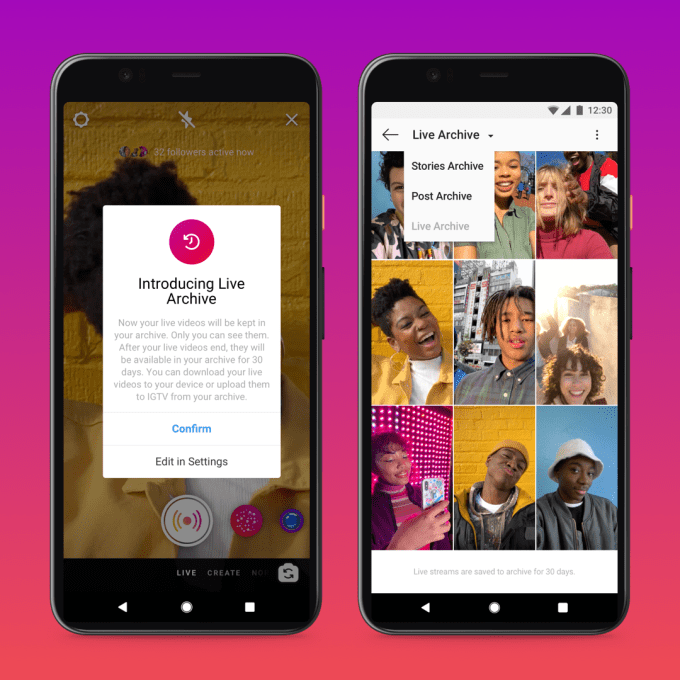 Before, users could archive their Feed posts or their Stories to a private archive, but the only way to save a live stream was to publish it to IGTV immediately after the stream, through a feature introduced in May.

The company says the new option to archive live broadcasts will mirror the existing archive experience for Stories and Feed Posts.

The difference is that archived live videos will be permanently deleted after 30 days.

But up until that time, the creator has the option to return to the video to save it or download it. This would allow the creator to publish the video on other social platforms, like Facebook or YouTube, or even trim out key parts for short-form video platforms, like TikTok. The Archive feature also means if a creator’s Live stream crashes for some reason — or if the creator forgot to download it in the moment — it can still be downloaded later on.

The news follows another recent Instagram update which introduced a new way for creators to monetize their Live streams.

The company earlier this month began rolling out badges in Instagram Live to an initial group of over 50,000 creators who will test the feature by selling badges at price points of $0.99, $1.99, or $4.99. These badges help fans’ comments stand out in busy streams, allow fans to support a favorite creator, and places the fan’s name on the creator’s list of badge holders.